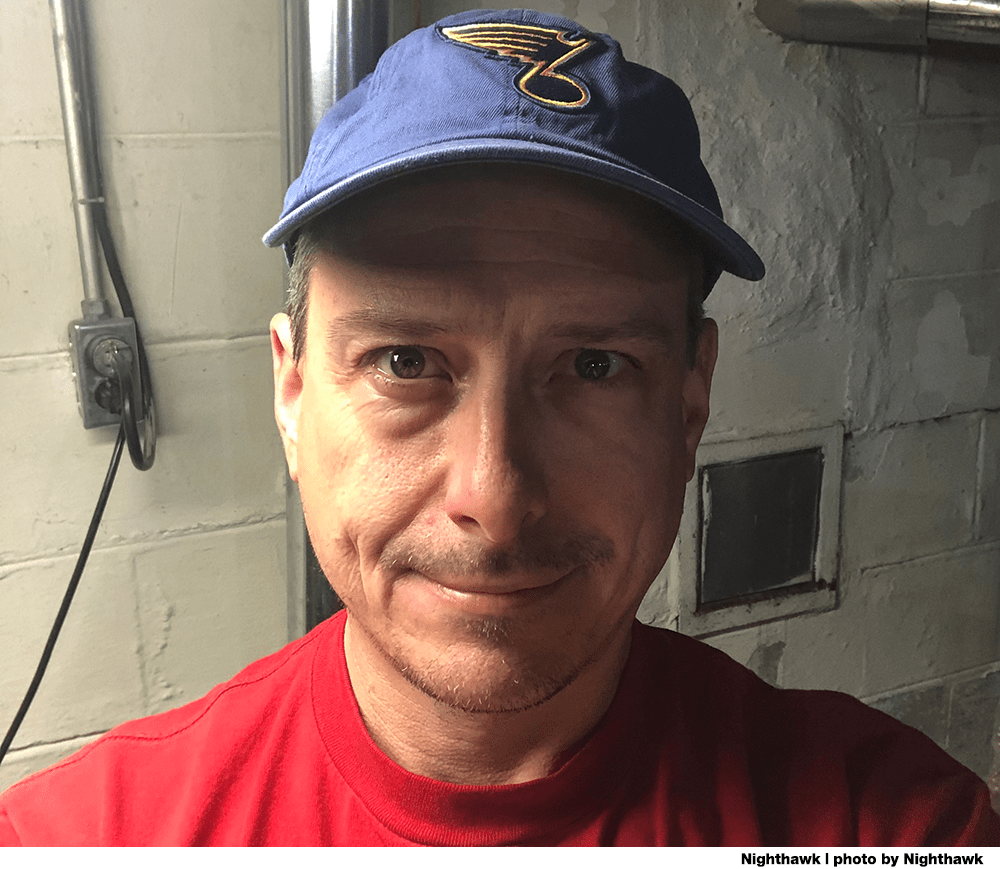 What Am I Supposed To Do? By Nighthawk

Now I’m forty-one. Now I have to get things done. It’s sort of like the MTX song, except Dr. Frank was singing about turning twenty-one. Not having your life in order is funny when you’re younger. When you’re older, it’s more pathetic. I’m not going on record here that forty-one is old, but that’s my new age as of late. Being late to new age music is another subject altogether. So I wasn’t just changing the words to a good song; I am forty-one years old. I’m also single, have never been married, and don’t have any kids. Classifieds anyone?

Not having your life in order is funny when you’re younger. When you’re older, it’s more pathetic.

I haven’t graced the screens of Razorcake’s website in about a year. Since then, I moved back to St. Louis (the place of my birth) from Chicago. I was gonna write something about how Chicago sucks, but everyone already knows that. It actually wasn’t that bad for the few years I was there. There are things that rub me wrong, but how many people care about some old grump complaining about a city that isn’t really that awful? It’s probably a small number. Since I’m not great at being an adult, moving was quite the ordeal. Because one weekend wasn’t enough fun, I made it two! That story isn’t short on material, but I don’t want to dwell on any of that. I shouldn’t have moved up there, and should have moved back sooner and more efficiently.

Unexecuted writing ideas bring me to this executed one. Don’t you just completely enjoy thinking about getting older and things you should do, in addition to the things you shouldn’t? Of course! I’ve been living with my parents for four months. Honestly, it’s not a terrible situation. They offered, and I didn’t feel like looking for an apartment. Moving three hundred miles is enough to deal with, and I’m still dealing with it. I probably would’ve been out of here by now, but my car’s transmission apparently got fucked up during the move. I towed it behind a moving truck using a tow dolly. It seems that sort of issue is fairly common. Maybe I didn’t strap the front tires tight enough or I had the emergency brake on? Who knows? Not me. This concludes the moving portion of the program.

On account of getting down here with no money, I’m still watching the news with my parents every night like some kind of a re-run that most people would turn off.

On account of getting down here with no money, I’m still watching the news with my parents every night like some kind of a re-run that most people would turn off. We actually get along fine. I don’t just stay in their extra bedroom, I also drive their extra car! But don’t worry, I almost have the dough! Rebuilding a transmission is really expensive. Ask around if you don’t know. After that, it’s off to look for an apartment! And then, I can be an adult or something.

The day after I moved back was my first day at my new (and current) job. A good friend of mine is a government official at the local level. He helped me out with an entry level position. The pay isn’t bad, my health insurance is already live, and the job isn’t really that hard. I’ve also already enjoyed several paid holidays. Being a government worker is pretty cool. I’m not going off in a political direction here, but governments are good and we need them and I’m happy to be helping. But I’ll eat an anarchy burger anytime. Hold the government please! That’s for all the old heads. The insurance plan that someone in the office helped me choose (because I didn’t know what I was doing) is less than twenty dollars out of my check every two weeks. I’m living with that! All I can tell you about it is that my flu shot was free because I’m insured. I haven’t picked a doctor yet, because I’m lazy. I do have it written down somewhere to do that. I have a lot of things written down. If I don’t like the plan I selected, open enrollment is in a few months. I think that means I can switch. You’re thinking, is this guy serious? He really isn’t sure what “open enrollment” means? Yes, I’m serious. I’ve only had health insurance as an adult several times. Anyway, I do plan on having the medical staff do the works on me. You know, hand up the ass, blood tests, et cetera. Whatever is recommended for a man my age. On the surface, I’m in good shape. I wanna know internal stuff though. Prostate for sure; my Dad had (has?) prostate cancer. Do you ever get rid of it? He’s right here, should I ask him? Nah, he’s busy writing stuff down himself. This apple didn’t roll very far from that tree. He just got out the Liquid Paper® though, and that’s where we differ. That symbol was for Rev. Nørb. My paternal uncle had prostate cancer also. I do piss often. Alzheimer’s runs on my Dad’s side of the family too. Lots of health stuff to think about. That staff is gonna have a full day.

So I have a good job. Oh, there’s a pension too. I won’t even pretend to know anything about that. Vesting, five years, something else? Hopefully by the time you’re reading this, I’ve finished my probationary period and become permanent. I think that means I can’t get fired, unless I stop showing up for a really long time or do something really stupid at work. Several people within the taxpayer-funded organization have already told me as long as I keep showing up and doing my job, I’ll be fine. Down the road, I guess, I’ll try to move up to different positions in other departments. You know, to get paid more. At some point, decades from now, I can retire. However that works.

I know I’m plenty of years behind lots of other people my age. It’s a good thing it’s not a contest. Hold your applause. I’ve had some other career-type jobs, but I guess they weren’t careers. Again, please hold your applause. I’ll just retire when I’m eighty or whatever. It’s cool. I’ve sort of been retired already. My parents are retired, well my Dad is. My Mom lost her last job and didn’t get another one. They were born in the late 1940s. It’s probably been close to ten years since they have been enjoying no alarm clocks. I really envy that. I guess I don’t mind doing something, but I’d rather not work. I won’t lie. My parents got married at twenty-four, bought a house (the one I’m in now) and had their first kid (my older brother) by thirty, and were retired way before I’m gonna possibly be. This younger generation, they just don’t care. Fucking millennials. I really haven’t cared about too much so far, and still don’t. Is that glaring or surprising?

This is what people do as they get older, right? Plan for the end of their lives to be decent?

I don’t think I’m gonna get married, but nothing would surprise me. I wouldn’t think kids are happening either, but some wild shit could happen. That’s not something everyone does, obviously. Not everyone has a career and retires either. Maybe I won’t. Currently, I’m lined up for that. I would like to buy a house. Paying rent when I’m ninety isn’t something I look forward to. What are the mortgage rates these days? Anybody? Should I buy a house if it’s just me? How do I know if it’s gonna be a party of one? It’s impossible for me to know. This is what people do as they get older, right? Plan for the end of their lives to be decent? Have you done this? Is the end of my life in fifty years, or next week? I wrote a meaning-of-life type thing a few years back, so I’ll stop there.

How long should I be a government worker before I try to buy a house? Is it good to have some debt? Is no debt the way to go? How much of a down payment is reasonable? What size house is a good idea? There really is a lot involved in lodging. I’m not anywhere close to that type of commitment; hell, I haven’t even looked for an apartment yet. If I don’t have kids, I guess I just have to make sure whoever takes care of the death stuff gets paid. My nephews and nieces can have anything left over. Maybe I’ll give it to Razorcake! I’ll probably give my body to science. Why not? I won’t need it.

Let’s go down the list. My car is almost fixed. I’ll have an apartment soon and might eventually buy a house. My job is good and I have health insurance. Hopefully, I won’t need to apply for another job again. That sounds weird. I might get married, and possibly have kids. I need to pay off all my bills so no one else has to deal with this thing that is my life when I die. I’m pretty sure that’s everything. Oh yeah, keep having fun. I don’t think about this stuff all the time, but occasionally. What I do think about a lot is being off work. I told you I’d rather not work. The title is a Billy Reese Peters reference. Rock on.