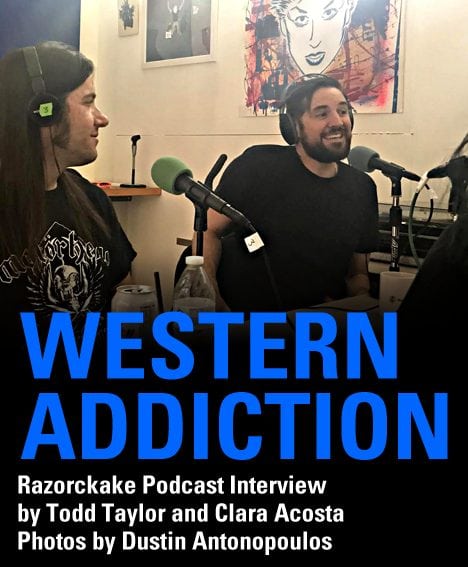 Western Addiction is a San Francisco punk band that—what it lacks in an extensive catalog although they’ve been in existence for over twelve years—more than makes up in depth of quality and concentration of creativity. Exhibit one: Tremulous, their newest LP, was the album to which I finally blew out my truck’s speakers.

Western Addiction is a band that exists in the gaps. Between Black Flagian hardcore and Black Sabbathian hard rock. Between Bad Religion’s “what the fuck was that word?” and Motörhead’s lizard brain motto of “Don’t let the bastards grind you down.” The words are compelling, the beat undeniable.

They don’t tour often, so it was a treat to for Clara Acosta and I to sit down with singer and lyricist Jason Hall and drummer Chad Williams. Some of the topics we cover are: professionally naming a television show on the BET network, smooth jazz isn’t music, Metallica, skin disorders, Saint Lemmy Kilmister’s life advice in not smiling in photos, and that the Rainbow is both a bar and a grill.