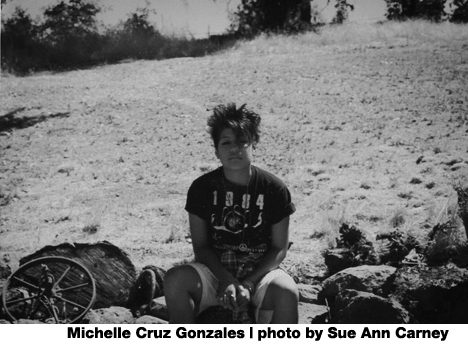 In 1984, the actual 1984, I saw the band Reagan Youth at the Democratic Convention held that year in San Francisco with my friend, and soon-to-be bandmate, Nicole Lopez. I was fourteen, clad in black and flannel, with freshly chopped hair. Nicole’s mom drove us three hours from our small town in the California foothills to San Francisco just so we could see the bands and take part in the protest. A protest site was designated in the empty lot at Mission and Howard across from the Moscone Center, which back then (pre-multi-million dollar buildings on every square foot of empty space) was simply a large slab of concrete that took up the entire city block. It was there amongst a sea of leather jackets, mohawks, ripped jeans, and undercover cops cleverly disguised in jean jackets and protest buttons that Reagan Youth played with the Dead Kennedys, MDC, and the Dicks.

Given the ominousness of the year 1984 and the draconian policies put in place by the outgoing president whose policies had further marginalized the lives of many (especially youth from low-income families) there was a lot to protest. Sort of unknown on the West Coast, Reagan Youth played early in the day, drew an enthusiastic crowd of white, brown, and black punk kids with their energy and aptness of a band with their name playing the Rock Against Reagan tour. Dave Insurgent, who for some reason had hippie-punk, white-boy dreadlocks, stood at the edge of the stage, leaned into the crowd and incited our ire. Frustrated about class hierarchies, Reagan Youth drew the lyrics for the song “Brave New World” straight from the book of the same name by Aldous Huxley. Many English punk bands wrote anti-Thatcher songs during the same time period, songs that also referenced dystopian texts, or the dystopian nature of the Reagan/Thatcher era that was punctuated with military escalation and pull-yourself-up-by-your-bootstraps style welfare reform.

Growing up Xicana in a small, predominately white town in California, I felt much like a dystopian protagonist: trapped in a world that denied me my individuality. A spiky-haired, black eye-liner, ruffled Mexican rick-rack-skirt-wearing teen, I noticed many punk kids came from broken homes, had parents who were addicts, or lived in boring go-nowhere suburbs. We hated polo shirts and boat shoes. We hated high school, sports, and anything else that felt like a popularity contest or that only served to distract us from the fact that we faced a very uncertain future amid the Cold War and threats of nuclear destruction. We were depressed. Our lives, as we were living them, didn’t fit. While many adults tried to make us feel like it was us, like we weren’t right, like we were messed up, like we were the problem, we had enough sense to know there was more to our dissatisfaction, our anger about social control and feelings of alienation. Angry punk rock songs and angsty literature were good outlets for these feelings. The Subhumans song “Big Brother” is a perfect illustration: “Here we are in the new age/There’s a scanner in the toilet/To watch you take a bath/And there’s a picture of Hiroshima/To make sure you never laugh.”

In my teen years, it was political punk rock that helped me cope with feelings of estrangement, traumatophobia, and dying of radiation poisoning. When punk rock wasn’t enough, I turned to dystopian fiction, a literary genre seemingly designed for punk rockers and teens who drew mushroom clouds on their binders. Dark in tone and topic, dystopian literature definitely wears all black.

Like punk rock, dystopian literature is urban, gritty, and grayscale, and like many punk rock bands, dystopian literature makes important critiques of society. Dystopian literature sneers satirically at inequality, hierarchical divisions, and autocratic rulers—punk rock often does the same. And probably for these reasons, many punk bands reference dystopian novels in their songs. Like Subhumans, Dead Kennedys reference 1984 in their song “California Über Alles,” an anti-Governor Jerry Brown song, a song that shouts down yuppies taking over the state and making kids meditate in school: “Close your eyes, can’t happen here/Big Bro on a white horse is near.”

The majority of the Dead Kennedys lyrics are satirical, and satire is a device/genre that makes extra close examination of meaning especially important. Unlike what many of my students often initially think, author Jonathan Swift is not being literal when he proposes we turn to cannibalism and eat babies to help the poor. And satire is partially responsible for my early confusion about the song “California Über Alles.” Even at the age of fifteen when I blasted it in my room and pumped my fist in the air, or when I saw the Dead Kennedys at the Mabuhay Gardens in San Francisco, I’d wonder why pick on a liberal Democrat? Why pick on Jerry Brown? Looking at these lyrics now, I, of course, realize why. First off, 1984 author George Orwell would say all people in power should be questioned and scrutinized. Secondly, if you look closely at what Jello Biafra, singer and lyricist of the Dead Kennedys was critiquing, you see yuppies. Look again at all the lyrics, and you’ll see gentrification in the song’s references to jogging, organic food, and “zen fascists.” Biafra’s fears of a “cool, hip” (read expensive) California have come true, especially in the hyper-gentrified, and now exclusive, San Francisco where the Dead Kennedys were based. Go see it for yourself if you can afford the trek. Take a hard look at tent cities, where people priced out of apartments now live, all that they own in the world lining freeway off-ramps, set amongst a backdrop of towering glass buildings and ten-dollar tacos.

Political punk rock has always been an urgent critique of immediate concerns, a sort of real-time social critique in song, while dystopian novels are cautionary tales. Yet, the themes addressed by the two are often the same: squashed individuality under the pressure of societal norms, corporate control of our lives, and subtle and overt forms of propaganda used by democratic nations that should know better. The band, Set It Straight from Redding, Calif. (active 2004 -2007) addresses some of these themes in the song “Self-Deprogramming.” It was written prior to Gary Shtenyngart’s modern dystopia, Super Sad True Love Story, a novel about the dangers of group think and a nation obsessed with mobile devices, youth, and hotness ratings. The novel, published in 2010, and the song have a lot in common, “Super latte charged electrons, androids with no face/ But only those who subconsciously want to live their lives spoon fed/ subordinated, placid, incarcerated, succumb to the machine.” Like Shytngart’s Super Sad True Love Story, this song criticizes modern-day forms of brainwashing via slick technology and the allure of power. Its references to lattes and androids are familiar dystopian fears regarding loss of individuality and a loss of humanity. It’s a loss of humanity we sadly participate in via our robotic obsession with digital technology that often does the thinking for us.

A Dystopian Bait and Switch

Of course, robots, surveillance via mobile devices, and other futuristic dystopias, almost seem quaint compared to what is happening now. In the post-smart phone 2000s, while we were busy worrying about digital technology spying on us, replacing humans, and stealing our jobs, what many thought were archaic forms of xenophobia, misogyny, and gender terrorism roiled hot and ready to explode, and an old-school totalitarian was making his move. Now trapped in a dystopian landscape of our own, Donald Trump used his celebrity, wealth, and privilege to invoke ages-old rapist-terrorist-nativist-racist fear mongering and won the election and the culture wars with help from the outdated and systematically racist electoral college. As president of the United States, he continues to animate mobilize a surprisingly large base of people and sow unnatural distrust of the media. He has also attempted to rewrite history as it happens and our perception of it—a major feature of Orwell’s totalitarian regime in 1984.

Some unclear about the purpose of the genre believe dystopian novels have, in some ways, foretold the future, but dystopian novels, like many punk songs, are really meant to be critiques of folly in our current societies. Still, one person’s dystopia is another’s utopia. For those swayed by promises of walls, Muslim bans, mass deportations, and nativists’ vision of America (not to a mention a threat of a reversal of a woman’s right to choose and transgender rights) we have entered what the party leader, O’Brien, in 1984 called the golden country: a place where everything seems fine, everyone looks like you, acts like you, believes what you believe, a place where no one is a threat or a challenge to the status quo and where those who disagree are silenced. But we are not fine. So many of us have become reacquainted with our inner angsty teenager or our inner dystopian protagonist. We will re-read 1984, The Handmaid’s Tale, Herland, We, ­­­Parable of the Sower, and we will pump our fists in the air to our favorite punk songs, but that’s not all we’ll do. No, that is not all.