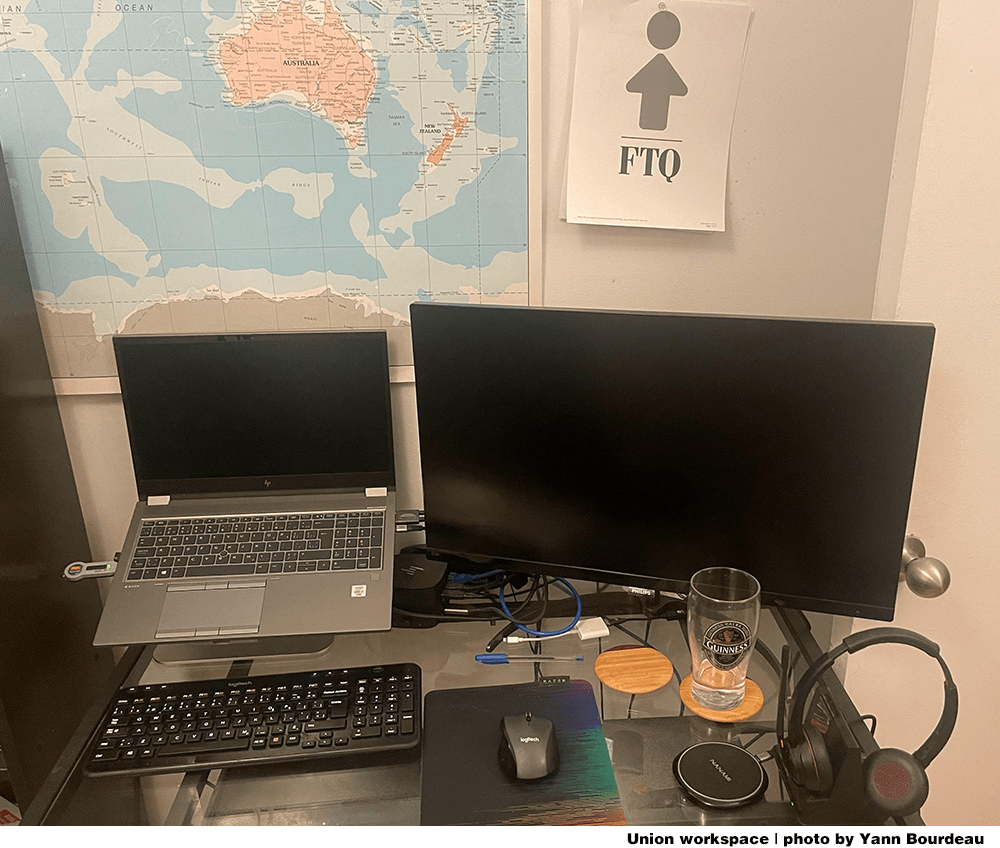 Unions: How I Joined a Union and Loved It by Yann Bourdeau

I’ll introduce myself in this first column. I hope to write more columns in the future.

The reason why I wanted to write a column is I started a blog in French and I discovered that I like to write. The blog was created to get better at writing. I did a search online on how to be a better writer and one of the suggestions was just to write a blog. My blog is in French and I wanted to do the same in English. So, I thought of doing a column for Razorcake. They always ask to get involved.

A little background about me: I have hit fifty this year and I have been listening to punk music since I was fifteen. I have always been interested in punk music (S.O.D. was my first hardcore/punk record I heard in 1987) and computers (long live the Commodore 64). I have been a software developer since 1994 (no completed degree at that time). I went to university in 2002 to get a degree and later earned a master’s, both in software engineering. I have mental health issues that are controlled by medications since 2002. My last mental health crisis was in 2009. I’m a liberal and on the left of the political spectrum (I vote NDP (New Democratic Party, Canada) and PQ (Parti Québécois, Québec)). Enough about me.

The idea of being in the same zine as other Razorcake writers is amazing. Each time, I receive a new Razorcake issue, I read all the columns. I have been reading Rev Nørb since he was in Maximum Rocknroll, so I must not be the oldest one.

At first, I did not think much of being in a union except the money I pay them.

I got a job at Hydro-Québec two years ago, first as a consultant and now as a full-time employee. It is the nationalized power company of Québec. It is the first job I’ve had where I am in a union. At first, I did not think much of being in a union except the money I pay them. Later on, I realized employees can talk salaries because everyone is on the same wage scale. Also, everything is codified. If there is a need for overtime, it will be paid—after forty hours per week at the regular rate—at one-and-a-half the hourly rate. It’s my first job where my overtime is paid and not in a “time bank” at a rate of hourly rate. Many employers that have employees at yearly salary force their employees to “bank” overtime hours to avoid paying out time and a half of their normal hourly rate. You can take paid time off from the accumulated hours in the “bank.” Or worse, at a previous job the overtime was never paid nor put in a time bank. At Hydro-Québec, it is never mandatory to do overtime because it is always for those who want to do it. I never do overtime when it is offered. Some of my coworkers do it for the money.

For much of my life, I had psoriasis on my body. It seems it appeared because I was always stressed. It has now been two years since I got a spot of psoriasis on my body. The less stressful environment made it disappear. The union mandates that an employee cannot be laid off without a reason (usually disciplinary). Also, in a corporate restructuring, all employees are kept and must be reassigned to another job in the company at the same salary. So, Hydro-Québec will be the last company I work for. Not bad for a fifty-year-old software developer. There’s a lot of ageism in this domain.

When I was in my twenties, I thought that unions foster the lazy while the best workers were not rewarded for their efforts. This myth is perpetuated by the managers of companies that don’t want a union and don’t want to lose power. As I grew older, my view changed on this topic. Now that I’m in a union, I can say that all my coworkers are working hard and are not lazy. Yes, there are some workers who are better than others, but they don’t seem to mind that they have the same wage as workers who are not as proficient as they are. (I don’t mean they’re bad employees but they are not on the same skill level.) The idea that someone merits a better salary for their skills is in favor of the management. In many work environments, people don’t talk openly about their salaries. It’s largely a secret what people get paid and who has a higher salary. The managers prefer to have each worker compete with each other than work cooperatively. In many places workers prefer to look good than bad. Also, often they are not afraid to make others look bad to make themselves look better for a manager. In my opinion, this kills teamwork. Workers are not willing to help each other out for not wanting to make someone look better than them.

Also, a long time ago, the union negotiated a work week of thirty-five hours. I appreciate this a lot. It is my first time in my life that I don’t work forty hours a week and what a difference it makes.

When all the employees of a company make a common front, they have more power than divided.

So, when I read about the efforts of workers wanting to join a union in Amazon, Starbucks, and even software companies. I totally support them trying to make it possible. When all the employees of a company make a common front, they have more power than divided.