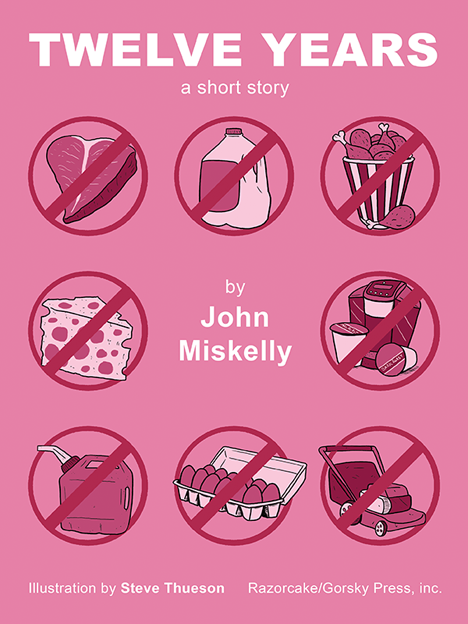 Agent O’Hannon slid a cup of brown liquid across the table. “I can’t remember if you take whey milk or rice.”

“As if anyone cares about the difference,” said Agent Riley, sliding the chair out from the café table and sitting down. The foam padding on the chair prolapsed out of a tear in the faux leather plastic cover and the metal frame was grimy with rust.

“It’s still weird to see you wearing a suit,” he said.

“It’s still weird seeing you in the daylight—all our ops together were at night,” replied O’Hannon.

Out of habit, both men looked about them, surveying the café and instinctively sizing up the clientele. The place was clammy with the steam from the kitchen. O’Hannon’s eyes rested briefly on a young woman sitting on her own wearing a tracksuit and poking half-heartedly at a sausage roll.

Riley raised a skeptical eyebrow towards his ginger fringe.

“One of my greatest triumphs. Raid 7762. March 2028. Messy, I’ll grant you, but cases like that are what got me into this suit,” replied O’Hannon, coolly.

“Well, you certainly couldn’t wear those overalls again, what with the stains.”

O’Hannon had a habit of pinching a hair or two of his beard and twisting them between his forefinger and thumb when he talked about his own past.

“You cut a couple of those guys into quarters, according to the guys at CSI.”

“—and got our foot in the door to that black market meat ring.”

“That still counts as my bust!” spat Riley, hurriedly.

“I never said it didn’t. What was the size of that haul again?”

“Twenty kilograms of chicken, fifteen of beef and… the cheese…” Riley tapped on the table with his index finger as he searched his memory for the figure.

“Six kilograms,” said O’Hannon. “And we got the supplier too. Some guy in Leeds city centre keeping a couple of cows in the cellar. I still can’t work out how he got—”

“Don’t start that again!” said Riley. He looked down into the murky depths of his cup. “I’ve got some bad news actually. You know the Black Kettle?”

O’Hannon’s sardonic smile faltered and he dropped his hands away from his beard. He gave Riley a cold stare.

“There was a raid there two weeks ago. They had one of those old coffee machines going, you know with the plastic capsules? So wasteful. They had that old actor in the ads, what’s his name, smug guy—”

“Of course I know the machines!” spat O’Hannon. He relaxed back into his chair. “Sorry, I’m just—I can’t believe the Black Kettle… they put up that plaque to us. It’s a tourist attraction. Kids go and visit it just to see where it all started.”

“Well… technically The Party put the plaque up. And I think the schools make the kids go.”

Both men sat in contemplative silence for a moment.

“There’s still a few around. But to have the machine and the capsules. I mean you can imagine the prices they were charging, even with that stale old coffee.”

“He’s got ten years in Stirling. He’ll most likely die there of course. Sorry to be the bearer of bad news.”

“Well, I mean, Jonesy… in the beginning when it was just us and the rest. The Black Kettle… you said it yourself it was where it all started, the meetings, those first batches of guns. It’s natural to feel sentimental—”

O’Hannon went to slam a fist against the table and restrained himself just in time, his eyes darting about the place. “It’s not—” he could barely say the word, “—sentiment. One of those bloody machines operating in a place like that. It’s humiliating, Riley! Those machines were everything we… all that plastic. Millions of plastic fucking little capsules, fucking landfills of the fuckers.” O’Hannon held up a shaking hand, forefinger a couple of inches from his thumb and holding an imaginary coffee capsule. “The laziness… everything we’ve done to get away from that. Everything we’ve—we’ve—done,” he pointed from himself to Riley. “To create all this.”

Riley made a conspicuous visual sweep of the shabby café. “All this?”

Riley made a placatory gesture with his hands. “I know. I get it.” He let a few more seconds pass until O’Hannon’s breathing became more regular. “Also—and it’s not out of any sense of the good old days or anything like that—but Phil Coles went down last week too. Keeping one of those old petrol-powered lawn mowers in his garage. Now there’s a nostalgic old bugger if ever there was one.”

“Yeah. We’re the last of The Beginning.”

“Waddle and Sanchez got killed in 2020,” recalled O’Hannon.

“Blew themselves and a fleet of SUVs sky high. Called terrorists then; have a football stadium named after them now.”

“Harrington, Gillespie, Kowalski, and Fogell shot by police in ‘21, shut down Heathrow for a week. The Central London tram station has statues.”

The faraway, glazed look that O’Hannon had in his eyes disappeared. “Bah,” he said with a dismissive hand gesture. “A lot of them were in it for the image. Fashionistas turned vegan when The Times Sunday supplement did a couple of features. Romantics looking to wave a gun around about something.”

“Careful. A lot of those names are on the Martyrs Walls, offenses or no offenses.”

“Bandwagon jumpers. I’m not saying they weren’t committed, but me for instance,” O’Hannon jabbed a thumb into his own face, “vegetarian since six, vegan—”

“Since thirteen. Yes I know. But still—credit where it’s due. And I won’t deny myself a bit of sentimentality. This was all about the preservation of the species, and it never felt consistent, the deaths…”

“We had twelve years. And we did it in ten. And what had the old system achieved? Almost banning plastic straws?” He gave a derisory laugh.

From outside, through the fogged-up windows, there was a flurry of bicycle bells and indignant shouts; the dull hum of an electric truck’s motor; the screech of tires and the clunking of the truck doors.

“They’re doing pick ups on Sundays now I see,” said O’Hannon, not looking round even as the door of the café opened and three burly men in uniform entered. “They should speak to the union about that. Tell me, Miss Fernandez, how was the sausage roll? I think they use pea protein here. Slightly better than oat, I think, but not as good as the humble chickpea. But, then again, I’m old school.”

The young woman in the tracksuit turned and glared at O’Hannon. She got up and gestured the three uniformed men forward.

“How did you know?” Riley asked O’Hannon, betraying only the merest hint of surprise.

“I did everything exactly by the book, Captain Riley, sir,” said Fernandez defensively.

“That’s how I knew,” said O’Hannon. “That and the class of ‘32 graduation photo in the Bureau lobby.” He turned his attention back to Riley.

“So what’s it going to be, Captain? Don’t tell me it’s about that coconut milk in my shoebox in ‘29. That wasn’t even law then.”

“No, but I expect we’ll use that in the trial.”

O’Hannon smirked and gave a scornful grunt of a laugh.

“But it’s more your attitude, O’Hannon,” continued Riley, “Some in the party find it… forthright. Or ‘old school,’ as you might say. All that sound and fury and bombast. It just doesn’t look good for the ambience we’re looking to create these days.”

O’Hannon was cuffed and led towards the door of the café.

“I’ve always felt that’s where we differ, Riley,” said O’Hannon. “You were always a bit more squeamish, but you never had quite as much sense of fair play.”