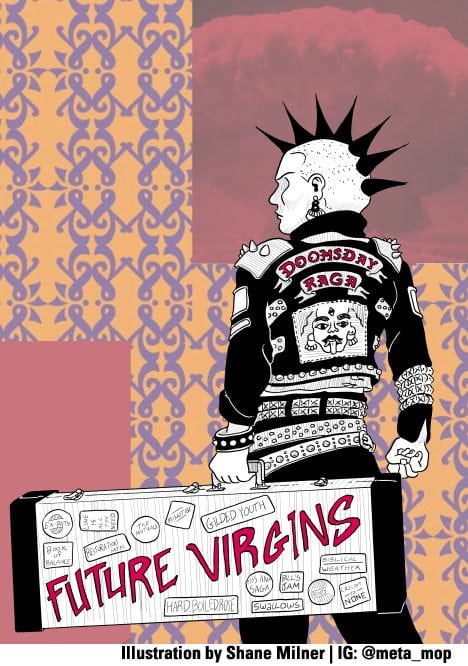 Candace Hansen
Top Five Distillers Songs I Hope They Play at the Reunion. (“City of Angels” doesn’t count of course they’re gonna play it.)
1. “Blackest Years”
2. “Sick of It All”
3. “Hall of Mirrors”
4. “World Comes Tumblin Down”
5. “Gypsy Rose Lee”

Cynthia Pinedo
Five Bands I’ve Had on Repeat Lately
1. The Groans: This queer punk band hails from the Inland Empire. These QTs are so talented and so great live! Everything for Everyone is so good, and “BEBO Song” is a tribute to dogs that is always stuck in my head (in a good way).
2. Bad Cop/Bad Cop: OC/LA band Bad Cop have been killing it. Their album Warriors came out last year, and is full of jams. “Womanarchist” is such a powerful song; so important right now.
3. Weird Night: OC band Weird Night (formerly White Night) is lo-fi pop punk goodness, and I’ve had their self-titled album playing so much. “Al” and “Seis Seis Seis” are some of my favorite tracks.
4. Jawbreaker: So excited for their three nights at The Palladium.
5. The Bananas: Love them, and have probably listened to them more than any other band this year so far.

Designated Dale
1. Nightmare Boyzzz playing again! New material hopefully in the works?
2. Molotov rocking and ruling the La Tocada Music Festival. Mexico City’s own never, ever disappoints.
3. The Sriracha-Chas debut full-length. Quote the late, great Cyrus: “Can you dig it?!”
4. La Tuya record release party at Cafe NELA, with extra special thanks to those clocking the extra miles to be there.
5. Razorcake celebrating its seventeenth year (!) by the time you read this. You’re fucking welcome!

Eric Baskauskas
Top 5 Band Names That Everyone Else in My New Hardcore Band Hated. You Can Use Them.
1. Earth O.D.
2. Clear Distaste
3. Big Bro
4. Anticene
5. Steamed

Iggy Nicklbottum
Top 5 Best Moments at Curating Resistance: Punk as Archival Method Conference at UCLA
1. A collection of the best in women punk and rock of the ‘90s reminiscing on their best and worst moments in their careers, as well as giving their advice to young punks.
2. Lobotomy Mag panel was nothing but laughs. Every little party and moment was told in great detail, at the delight of the entire panel.
3. The tour of the archival collection of punk. Many small and interesting artifacts are being saved for future generations.
4. It was reunion of a lot of local older “classic” punks who were ecstatic to see one another. I was the youngest one.
5. It was student-run and they had plenty of free croissants.

Megan Razzetti
Top 5 Songs That I Really Like Right Now
• “Onion of My Eye” by Fleshies
• “Crumble” by Dinosaur Jr.
• “My Beautiful Ruin” by Sundowner
• “Sour Candy” by Bleached
• “Cut Yr Teeth” by Kississippi

Michelle Kirk
Top 5 “Summer in February” List
1. “Gone for the Summer,” Telephone Lovers
2. “Sunsetz,” Cigarettes After Sex
3. “They Put a Body in the Bayou,” The Orwells
4. Worship the Sun, The Allah-Las
5. King of the Beach, Wavves

Sean Koepenick
Bands That Deserve Their Own Beer
1. The Ramones
2. The Replacements
3. The Clash
4. Anti-Nowhere League
5. New Model Army

Do you enjoy these Top 5s? A great way to help keep them coming is getting a reasonably priced subscription to our bi-monthly fanzine, Razorcake. Click the link below.