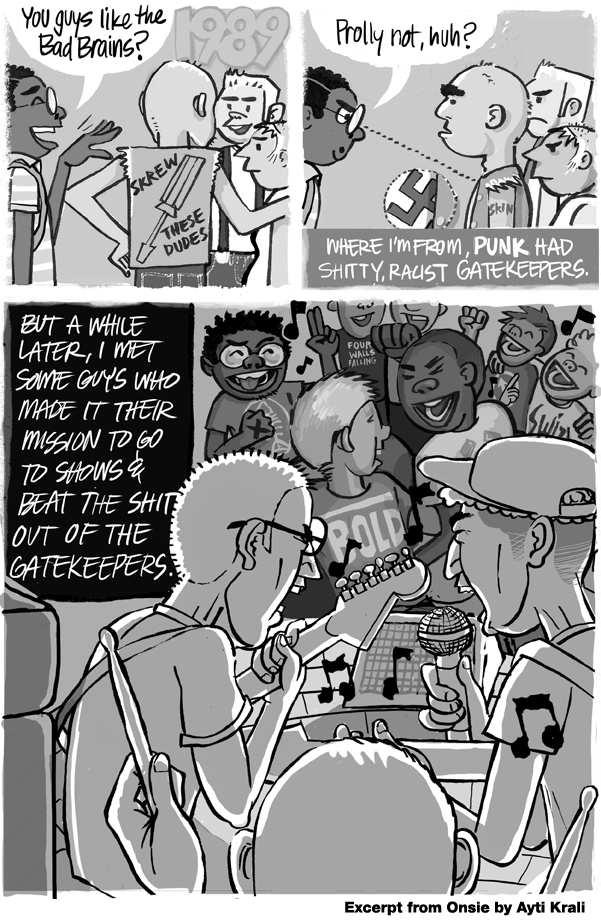 Too Tough To Die: An Aging Punx Anthology, 306 pgs.

A good chunk of them are punk origin stories that take you through the history of the writers’ own experiences. Hyena Hell has a great one where she’s writing a letter to the Dead Milkmen, telling the band they collectively saved her life. And a very creative one by Haleigh Buck called “D.I.Y. Till I Die” where every page looks like a different flier. There are some anecdotal comics about being an old punk that stand out, like Kyle Bravo’s “Old Man and the House Show” and Steve Thueson’s very funny “Favorite Restaurant,” where Steve gets outed by a young punk kid for not appreciating dumpster food. Then there are more serious stories like Jim Kettner’s “Unstuck” about being old, punk, and recently divorced. There are lots of good comic people in here that deserve your attention. My favorite of the bunch is “Onsie” by Ayti Krali, a story of Krali’s youth and struggling to have his foot in the Black and punk communities.

Overall, great work by tons of people with a couple of phoned-in entries. My only complaint is that some of these comics were done by people in their late twenties. Kid, you’re barely aging! Let’s see another punk comic in ten years when your knuckles ache all the time for no reason. –Rick V. (Birdcage Bottom Books, birdcage-bottom-books.myshopify.com)