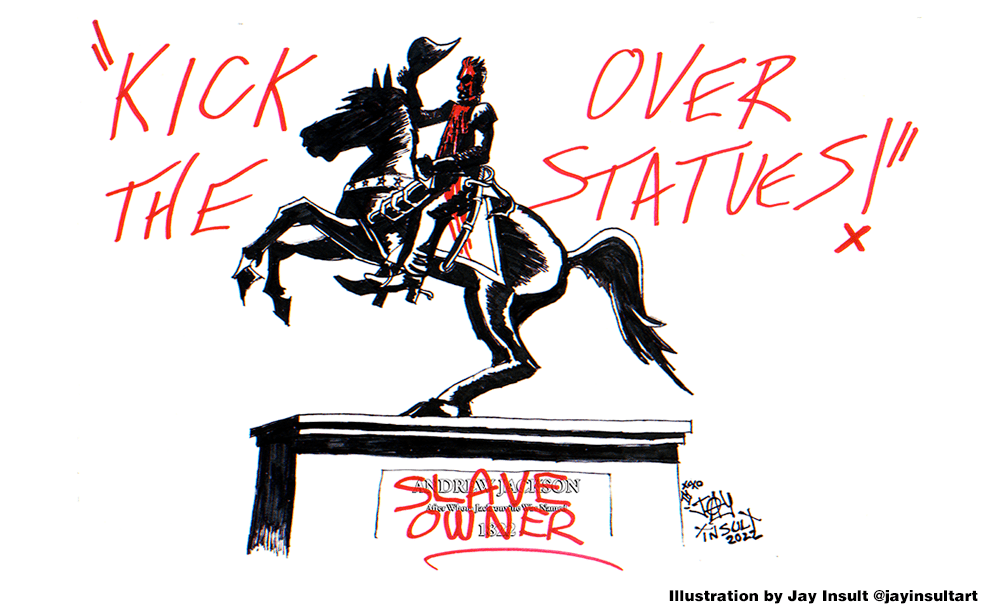 This Statue Sucks by Will Kenneth

After tearing down a confederate monument downtown and removing the name of Robert E. Lee from a high school, Jacksonville, Fla., still maintains a statue to Andrew Jackson downtown.

Andrew Jackson may not have been a confederate, but he was a slave owner and stood opposed to abolition just the same. He signed into law the Indian Removal Act, an act of genocide against native peoples who were removed from their homelands and forced to traverse the Trail of Tears.

Andrew Jackson might have been the first Florida governor, but he never stepped foot in Jacksonville, a city that bears his name. The statue downtown isn’t even an original statue. It’s a replica of the one in Lafayette Park in Washington DC. I hated it, and going by the number of times it was vandalized, I’m sure I wasn’t the only one who felt that way.

I didn’t realize how much Florida memorializing dead confederates and genocidal presidents bothered me until Rachel and I left. We took for granted that white supremacist symbols were chosen by default by our local governments and needed to be torn down, instead of realizing that other places in the country didn’t celebrate these bastards as heavily.

When we moved to Fort Greene in Brooklyn, we chose our apartment in part to being close to Fort Greene Park. As we got to know the park better, we discovered it was a historical Revolutionary War site. (We also learned that Fort Greene is a recently gentrified neighborhood, alongside some of the ones nearby like Clinton Hill and Park Slope.) At the highest point in the park stands the Prison Ship Martyrs Monument, dedicated to the 11,000 Continental soldiers who died aboard British prison ships due to overcrowding, disease, and starvation.

The park itself is named after Nathanial Greene, who oversaw building the original fort where the park is today. Some of those who died in those ships are interred in a tomb underneath, which is not open to the public, and one I’m hoping I can see in person one day. Park workers tell me the crypt is closed off because you could easily open up the sarcophaguses and scoop up some ill-gotten souvenir bones.

Today the park serves as a backyard for the surrounding neighborhoods. Most days the park is filled with friends and families hanging out enjoying our communal backyard. As I write this, I’m at the park holding out a spot to host my daughter’s sixth birthday party later in the afternoon.

As Rachel and I were planning our Florida escape, I kept thinking of all the second-rate historical sites and nature trails I had wanted to see before we left, but we ran out of time. (The most important historical site near us was an old fort in St. Augustine, but the rest of the surrounding area was a tourist trap with kitschy gift shops and corny ghost tours.)

What I didn’t appreciate about New York City before living here as an adult was that I was surrounded by history, much of it unmarked. I was inspired by what I learned about my own neighborhood, and I told myself I would want to get to know as many neighborhoods as I could. I didn’t just want to visit them; I wanted to learn their history, too.

But my time is limited. Keeping a full-time job, managing a household with my partner, and getting to shows hasn’t left me much time to explore. When Rachel and I had a date night to see Pup, Sheer Mag, and Pink Shift together at Terminal 5, I got FOMO for not being somewhere else. Yeah, the bands were all great, and seeing Jeff Rosenstock jump on stage with Pup to sing “Reservoir” was fun as hell, but I wasn’t having a good time.

Hanging out in dives all the time with your partner is no way to grow your relationship.

Ironically, I spent most of my life being jealous of all the great shows in NYC, and now that I’m here, my heart is somewhere else. Rachel and I agreed we still love going to shows, but we need to make time for other activities, too. Hanging out in dives all the time with your partner is no way to grow your relationship.

I convinced Rachel we should explore a 478-acre green space next to Prospect Park. I had spent months wondering what it was like after seeing it in Google maps. Rachel pointed out I was talking about a cemetery, which I probably should have figured out since most of the map markers were for grave sites, but we agreed to go anyway.

I’ve never explored a cemetery before, and I didn’t know what to expect. I was hoping to read some gravestones and see a few statues, but I was happy to just walk on some grass and be outside. This was me trying something new. I never willingly do anything outdoors despite living in Florida for most of my life. Outdoors has pollen and bugs, and when I was younger, I was happier inhaling secondhand smoke in packed clubs with no A/C.

We didn’t plan our visit to Green-Wood Cemetery at all, and we chose a train stop that put us several blocks away from the nearest entrance. I wasn’t expecting the cemetery to be fenced off, so we chose to hoof it despite the harsh summer heat, admiring what we could from outside. We were spent by the time we reached the entrance, but we were still determined to see something worthwhile, even if we could only muster a short walk.

Rachel asked a security guard for some highlights, and he was effusive with information, recommending we visit Battle Hill, Brooklyn’s highest natural peak. He shared with us that Battle Hill was named for a Revolutionary War battle where a group of Continental soldiers recognized its strategic value, fought British Soldiers to take the site, and then held it in more skirmishes. He said we’d see the statue of Minerva waving to the Statue of Liberty, which helps mark Battle Hill, and we could also find the gravestone of Leonard Bernstein.

Rachel and I agreed that would be the perfect stop, and we’d probably end our adventure there. New Yorkers will joke that true New Yorkers have never seen the Statue of Liberty. Seeing the statue is for tourists, and nothing is worse in NYC than being seen as a tourist. I kinda internalized that, but given we were here for sightseeing, and I didn’t actually have to stand in front of the statue, I was all for seeing Lady Liberty for the first time in my life.

We grabbed a map from the visitor center and stopped several times to take in the ornate mausoleums and statues, which reinvigorated us on our way to Battle Hill. When we arrived, we found a statue commemorating the New York soldiers who died fighting the confederacy. After living in the South for half my life, I was surprised to see a dedication to Union troops. I’d never considered that the North might memorialize the Civil War in their own way.

We soon found the statue of Minerva, poised in a wave to the Statue of Liberty, which could be seen along with an incredible view of Manhattan. I got emotional looking at the view. I was thinking about my family passing by the Statue of Liberty more than a hundred years ago on their way to Ellis Island. I was thinking about NYC celebrating its history and values of welcoming immigrants, and how these symbols of freedom stand in stark contrast compared to the South celebrating white supremacy and those who worked to uphold slavery.

I was also exhausted, which also partially explained why I started tearing up. The Northeast still has work to do, and I don’t want to gloss over that. Bigotry isn’t exclusive to the South, but at least in the Northeast the problem doesn’t feel as suffocating.

I love that Jacksonville showed they could rally to make progressive change. It gives me hope that one day Andrew Jackson will come down, too. After all, Jacksonville could always elect to replace him or even rename the city after someone who lived there.

I’d like to offer some alternatives to Jackson like Asa Philip Randolph, a civil rights activist, Carl Van Vechten, an artist and writer associated with the Harlem Renaissance movement, or Zora Neale Hurston, the author of Their Eyes Were Watching God. Heck, I’d settle for a statue of Limp Bizkit. My standards are pretty low.

I’m still experiencing culture shock after a year of living in NYC, and I don’t know when that culture shift will stop feeling radical.

I’m still experiencing culture shock after a year of living in NYC, and I don’t know when that culture shift will stop feeling radical. In the meantime, I’m going to keep exploring NYC, and seeing what else I can learn about my hometown.