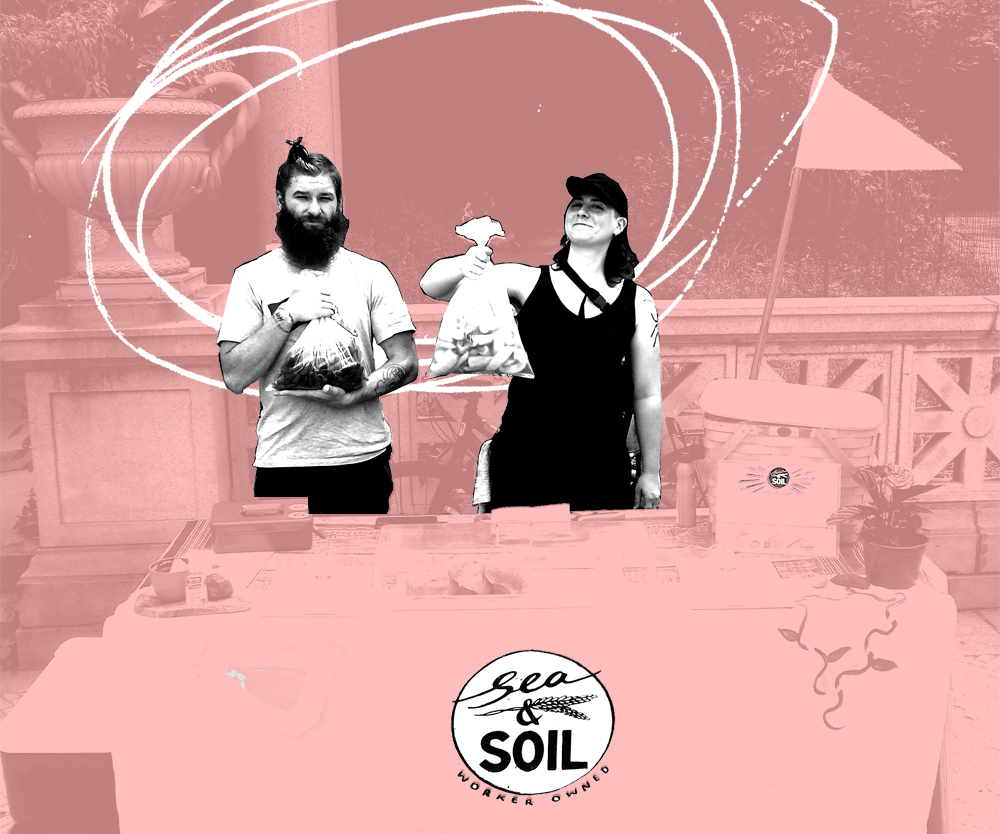 The Look, the Sandwich, and the Whole Fuckin’ System, by Daryl

Show me a DIY operation and I will explain to you the beauty of the worker-owned model. Responsibility, flexibility, and total fuckin’ freedom. Do the work with your hands and feel its rewards. Hold the end product in the very hands that created it. The work was done for the collective good, and you did it yourself, for yourself. Free of exploitation or coercion.

Sea & Soil is a worker-owned sandwich collective powered by the human forces-of-nature known as Gaby and Noah. Birthed from the bleakness of the calendar year 2020, they’ve been setting up shop at parks and farmers’ markets selling their affordably priced sandwiches all around Brooklyn for the last year. With a passion for bringing high quality food to their community, when they table it’s just as much outreach on the issues of food justice and workers rights as it is sandwiches. But the thing is: the sandwiches are also undeniably fucking delicious!

Noah and Gaby had gotten off work from their respective jobs at six that Friday evening and both headed over to Gaby’s apartment to start baking the bread for the sandwiches. My bus from Boston was running late so I didn’t even get into Manhattan till nine. I spent an hour figuring out where the hell I was going, and sitting on the subway, before I finally got to the apartment around ten. I arrived as they were putting the last couple batches in the oven. A second story kitchen filled with freshly baked buns that looked over the decorative lights of Little Caribbean. To be in a beautiful city watching wonderful people do something they’re passionate about, this is an overwhelming romanticism I welcome with open arms. This is hard work and hard dreaming. Staying up late after a long week to bake the bread that will be made into sandwiches in the morning.

When they finished I was able to borrow Gaby’s bike, and Noah and I rode to his apartment. Even though he had to wake up at five to start prepping the sandwiches he still made me what he referred to as a “weird vegan sandwich.” It was the first thing I’d eaten since noon, but it was objectively the best thing I’d had in weeks.

Scarcity is an illusion. And food scarcity is the most disgraceful version of it. Feeding people should not be thought of as a radical act, and yet here we are. A culture of shame. A culture of waste. Support those who are countering these ideas.

With a combination of confidence, an organized appearance, and keeping a low profile, Sea & Soil look as though they are authenticated with permits and the proper documentation. Amongst the other vendors they stand out at this farmers’ market. They stand principled and smile with integrity. Proud of their work. How many sandwich stands can claim they baked their own bread and offer their food at a sliding scale price?

“I’ve seen you two before,” a passerby states, “I think you offered me a sandwich once while I was jogging in Prospect Park.”

Another older man begins talking about how much he loves tofu. He’s eating a plum, his shirt is half buttoned. Mid sentence he trails off to the garbage can to throw away the pit.

“This is our target audience.” Gaby laughs. “Sucking the meat off a plum pit while talking to strangers. I love it.”

At some point in the early days of the pandemic it felt like society finally had a moment for self-reflection. For a major re-assessment. It’s so easy to forget about it now, because all the bullshit kinda just came back ten times stronger. But there was a time when everything had to close down that it seemed like lessons would be learned. One of the things I had truly hoped was that in the re-awakening it would be easier to build something for one’s self. The municipalities would realize how many fucking hoops they had created and would restructure their entire system to actually help the people who might need it. I’m not saying I’ve completely lost hope, because that’s a dangerous path to walk, but I just wish the hope I still have wasn’t so broken. Battered. And unfortunately, I think I’m fundamentally more disappointed than anything else.

Towards the end of the day, Gaby and Noah took some cash from the till and went and bought three cans of cider. One for each of us. Noah also went and picked up two giant bags of peppers which would be pickled, made into a jam, and used on future sandwiches. They only had one sandwich that hadn’t sold so they decided to break down the table, split the sandwich, and call it a day. I was sitting to the side as they disassembled their stand when Noah made eye contact with a man behind me.

“Excuse me sir, do you want a sandwich?”

“Sure, it smells really good! How much does it cost?”

And with that they quietly finished the breakdown and loaded everything into the car. As we drove away from the farmers’ market I asked Noah, “How did that come about…with that guy and giving him the sandwich?”

“He just gave me the look. I don’t know. Maybe I’m totally wrong about this, but I feel like sometimes you can tell when someone wants food but can’t necessarily afford it. And fuck it, we’ll just give them a sandwich.”

This is the power of working without a boss. Of working with other people you have total faith in. For every shitty service industry job these two people have worked, they are now in a position to make every decision for themselves. To buy produce locally and make everything from scratch as much as possible and as much as they wish! Putting money back into their community. No more getting calls from the boss who’s remotely watching them on security cameras. An atmosphere of cooperation and of mutual respect. As Gaby states, “The co-op model is not in and of itself an alternative to capitalism, but building successful, interlocking, cooperative economies helps to provide a road map for one way to shift power into the hands of workers.”

Your autonomy, and the authority you have in your own life is in danger. Embrace the hard decisions and harder work. Crunch the numbers. Work together, and work smart. Send yourself on assignment. Give away your last sandwich. You’ll be thankful you did.

Pick up a print copy of this article here-
https://razorcake.myshopify.com/products/the-look-the-sandwich-and-the-whole-fuckin-system