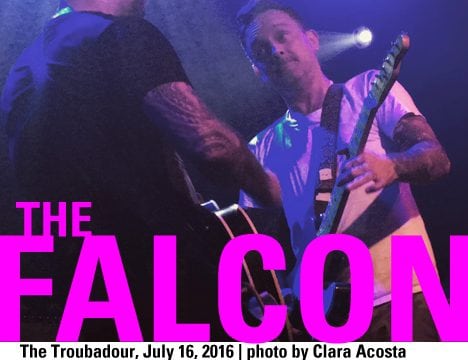 The Falcon, The Copyrights, Sam Russo live at the Troubadour, July 16, 2016 By Clara Luci Acosta

Brendan Kelly doesn’t know this (how could he?), but about two hours before I’m supposed to be watching his band play, I am sitting in a gay dive bar in West Hollywood with my best friend Dustin. I don’t know why, but I can’t shake the feeling that this is completely appropriate before going to see him. If I were drinking a beer instead of the pineapple and—if I remember correctly—vodka drink I ordered, I would truly be feeling at one with Mr. Bandsandwich himself. We’re not there long before we decide to head to the venue. Much to my dismay, we narrowly miss Mikey Erg’s set.

Sam Russo is up next, and we find a spot front and center. Even though I’m unfamiliar with his work, I become interested the moment he comes on stage with nothing but his acoustic guitar and a fairly adorable English accent. I would later find out that he has toured as a guitarist and backing vocalist for The Falcon. He begins his set and I’m not immediately drawn in. While Russo’s voice has the perfect balance of gruff and calm, the music is a little slow for my taste.

I become antsy and try to focus on something else. A girl standing a few feet next to me is singing her heart out to every single word. I take a moment and focus on the lyrics, and it brings me back in. I am reminded that not all music has to be fast and dance-y, and that it is okay to feel. I let Russo’s music take me on a journey into my own emotions, and I feel every word viscerally. As his set comes to an end, I am almost sad that I now have to switch my feelings off and get back into no-fucks-given punk mode. Dustin has to head out to feed the meter, and I join him because, well, I’m just a gigantic bag of emotions at this point and could really use the fresh air.

Once we’re back in, The Copyrights have already begun their set and the room has twice as many people as before. My sappiness dies down because there are two thoughts I always associate with The Copyrights: “Let the good times roll,” and “Party!” Their set list consists of a good number of songs spread evenly through their discography. They’re playing short tunes chock full of aggressive and undeniably catchy hooks and visibly enjoying every moment as they feed off the crowd’s energy. These guys possess the perfect pop punk formula and—not to oversell it—epitomize fun in the process.

By the time The Falcon hit the stage, we’ve made our way back to the coveted front and center. I’m boiling over with excitement to finally see them in action. While I typically avoid super groups (let’s face it, most are just in it for the money), The Falcon is a very reasonable exception. The super group consists of Brendan Kelly and Neil Hennessy (The Lawrence Arms), Dan Andriano (Alkaline Trio), and Dave Hause (The Loved Ones). The punk veterans start their set with crowd favorite “Sergio’s Here” then rip through a setlist composed mainly of songs from their latest album, Gather Up the Chaps, with some older songs sprinkled in here and there.

Their stage banter is genuinely funny and the chemistry between Kelly and Hause is undeniable. About half way through the set, they’re playing “Unicorn Odyssey” and Sam Russo runs downstairs to join them and sings along into Andriano’s mic. There is so much movement happening onstage, it’s hard to focus but it really riles up the crowd. They get so riled up, in fact, that a drunk couple behind me spills their entire cup of whiskey and coke all over me. I am initially pissed off, but it is a nice way to cool off after being sandwiched by sweaty strangers all night. I now refer to that incident as my punk rock baptism.

Right before their last song, Hause urges everyone to stick around after the show for some crowd interaction. They close out with my personal favorite “The La-Z-Boy 500” and the room explodes as we all sing along to “When the bell tolls, I’ll be fine / They say that living is a lot like dying.” A little less than half the room clears out when they’re finished; most of us are curious to know what this crowd interaction is going to consist of. Much to everyone’s surprise, it’s a conga line… inside that teeny, tiny room known as the Troubadour. Naturally, we all join in, dancing and holding the sweaty shirt of the stranger in front of us.

I can honestly say this was a show unlike any I’ve been to before.

Clara is a twenty-one-year- old college student who still lives at home with her mom. She likes going to comedy shows, collecting records, hockey, wrestling, anything written by Chuck Palahniuk, and Guy Ritchie films.