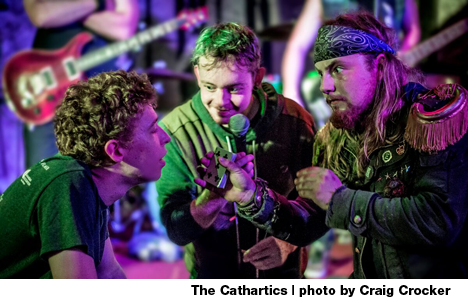 The Cathartics, Unhailed, Terry Savage And The Wonky Honkees, Thunderkok, The Catalysts at Gus’ Pub, Halifax, 09/26/2018 by C E Hoffman

A Wrinkle in Time: The Last Cathartics’ Circus

The rain’s stopped long enough for me to get to Gus’ Pub. When I arrive, the audience is literally my bandmates, three other humans, plus sad guys on the slots.

Whatever. It’s gonna be great.

Somewhere between sound check and Thomas (aka The Cathartics lead/tonight’s MC) donning a ringmaster’s jacket, the audience quadruples but after I ditch my glasses all the world’s a pretty blur, so it doesn’t make a difference.

We (The Catalysts) kick it off. Every time I plug in with these musicians I flood with gratitude. I feel like I’m allowed to be myself and that’s what rocking out is all about.

Everyone should be in a band—or some equivalent. Like how everyone should face their fears, laugh in public. Whatever your passion is, motherfucking go for it because behind passion lies the purest bliss. Nothing could compare to this.

I keep losing my breath. Is it excitement? Am I nervous and don’t know it? All I know is when I’m onstage I am born again, and I could do it again and again and people actually mosh to our set!

I’ll admit I miss the next band (sorry, Terry!) ‘cause I spend so much time talking with badass librarians on the curb. You can always judge a gig by its audience, and these people are fantastic. Some femme I’ve never met lends me a sweater ‘cause I’m cold and I feel like everybody’s good but some of us are out of practice.

I’ll also admit I completely forget which came first: the card tricks or the hot dog eating contest, and yes I was sober.

Next up: Thunderkok. (You read that right.)

Disclaimer: I hate metal. Or I did, until, Thunderkok took center stage. Their energy is impeccable. We are all made badass in light of this storm and while I dodge the moshers I am liberated. Maybe there’s more to metal than anger. Maybe the best metal evokes joy.

Everyone’s a hot, sweaty mess and almost everyone exits for air/cigarettes. I figure I should ditch ‘cause I wanna get to Charlie’s Bar before it closes but then again the vibes are great and I wanna see The Cathartics.

I don’t remember when Thomas water-boarded himself, when the balloons came out, when I spun around in streamers. All I know is the bands were tight and everyone was alive.

Unhailed takes over. They start chill but really amp it up by the end, pulling us with their rising tide.

Their song “Heavy Rain” hits me like sexy fog. The intro’s Bowie-esque in the best way.

Then they knock out “Rebel Yell” and nothing will stop us from singing.

In some mosh pits you’ll find the best people who ever lived. Life is for living and these fuckers are killing it.

There’s a paper airplane-making contest/cartwheel competition while The Cathartics set up. I am indebted to whoever thought of providing free popcorn ‘cause I sweated a surplus of calories. My hair’s a shitshow. I’m very happy. Everyone’s drunk. (Except me.) Everyone’s free.

The moment we’ve all been waiting for: The Cathartics! On the one hand, it’s a Wednesday night and we’re tired. On the other hand, music is the safest way to make love and the best way to wake up.

Two songs in, the whole crowd’s moshing: ripples on the universal seascape.

I don’t know what it is about The Cathartics but it’s like you’ve got these shimmering lovebeams fucking up a stage. Becky’s a monster drumming machine and Thomas keeps on keeping on no matter what bomb rolls in, like that moment moshers literally knock him over onstage and he Keeps. On. Playing.

In these small seconds we become big. One precious instant and we are infinite. Nothing matters. Not your IQ or the shape of your tits. Just this.

It ends with a group hug (“I love every one of you,” says Thomas.) I clean five streamers off the floor before slipping away into a fresh 1 AM.

FYI there’s some badass bands in Halifax. There are beautiful humans here and I could say the same for Marrakech and Bristol and probably everywhere. There are so many heroes you’ll never know, but I did, for a moment, and a moment is all we need.

C E Hoffman is a full time dreamer/part time human. They make music in The Catalysts and write words that (sometimes) get published.