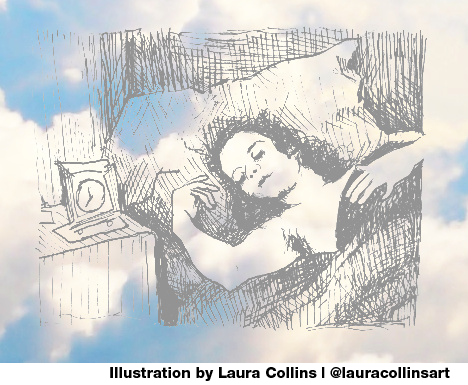 An examination of my history of using sleep as a method of anxiety avoidance.

When I was in high school my favorite extracurricular activity was napping. I spent a good portion of my teenage years in the depths of slumber. I didn’t have many part-time jobs, I sure as hell didn’t participate in any team sports, and I definitely wasn’t going out partying or on dates. Most of my free time was spent wrapped up in a blanket, snoozing my life away.

I didn’t think too much of it at the time; most teenagers are lazy (at least that’s what I told myself, I know now how untrue that is) and the “best years” are, in all honesty, pretty damn tough (this, on the other hand, is very much true). You study for eight hours, presumably get tormented for (if you’re lucky) only one to two hours in that time, spend most of your waking life trying to figure out who you are and who you want to be after those four years are over, and you deal with parents who just don’t seem to get it.

So, yeah, exhaustion is kind of par for the course. Plus, I wasn’t alone. A lot of my friends also took pride in their slumber. It’d be like a challenge between my friends and me to see who could sleep in the latest. Over the summer it would get really wild—I’d be impressed with my waking up at two in the afternoon to only be bested by another friend who’d clock in for the day at five o’clock. We didn’t have anywhere to be, and time, at that point in life, didn’t seem very fleeting, so why not spend most of it in a dream world where everything is just a little bit more exciting?

As I got older, I’d grow to learn that sleep wasn’t really just from exhaustion—it’s a solution. To boredom. To consistency. For avoidance. It’s a bad habit that runs in my family. My grandmother was known to sleep when she’d get upset—it would sometimes take multiple people to wake her up in the morning. In my formative years, my mom would often retire to her bedroom mid-day, exhausted and in need of space. It was hard for me to understand as a child why she wanted to sleep more than spend time with me. It wasn’t until I was older that I realized that it wasn’t her not wanting to spend time with me; instead, it was easier to sleep than to deal with the stress of her newfound (and unexpected) motherhood. I get it—I’m guilty of the same. If things are rough—sleep it off. If time is ticking a little too fast—don’t fight it. Go with it and sleep it all away. There will be another day tomorrow. Another chance to deal with what’s bothering me. Another opportunity to face challenges, as hopeful as that may be.

Nowadays, I think of naptime as a luxury I can only award myself if I feel I’ve truly earned it—or if I’m sick and have no other choice. And even then, I feel like any hours spent sleeping midday is time that could be better spent doing something, anything, else. Sleeping instead of productivity is a real-world nightmare, but even if I reject the notion of sleep, it doesn’t necessarily mean I’m living to my fullest potential. Even to this day I find myself lying vertical on the couch in place of confronting deadlines. If I sit on my couch in my living room and start to think ahead to my workload, my eyes instinctively begin to shut, my body to slouch. My internal clock falls off the wall for the night and any sense of urgency is trumped by a desire to sleep and get away from it all. And if I do manage to fight the sandman off, my time is instead spent mindlessly scrolling through my phone, playing some stupid app or another, until my eyes get heavy from staring at the screen.

That being said, the opposite is also true. Nothing upends my week more than an inadequate amount of sleep. As much as having a jam-packed weekend of fun and friends is great, it interferes with the amount of rest I’ll have to gear up for the next work week. Some of my worst anxiety attacks have happened when I’ve allowed myself to stay out late or party too hard on a Sunday night (a very rare occurrence), weekend me not caring enough about what Monday me will think. Waking up burned out on a Monday morning isn’t a good look on anyone—but for me, the mental exhaustion it causes is far worse than any physical tiredness.

So what have I learned? All the health tips aren’t lying—it is important to get the right amount of slumber, especially if you have anxiety issues. I’ve also learned that sometimes sleeping it off does help. When the anxiety quells late at night or the emotions run high in the wee hours of the morning, falling asleep to turn it all off and press the reset button for the next day is the best possible option. Sometimes those dreaming hours are the exact recipe needed to unwind. That being said, I’m also making strides to not only defer to sleep as a cure-all, especially when it is instead a roadblock to creativity, productivity, or an escape from issues that need to be handled.

I’ve gotten better at budgeting my sleep time wisely (removing my comfy napping couch from the living room in favor of my desk has also helped—I’m much less likely to lie down in my bed early on, instead forcing myself to sit at my desk and actually work.) I’ve also learned how much more I appreciate getting home from a fun night out with more than enough time to get a good night’s rest. But the balance is what’s key; sleep is important but, unless absolutely necessary, shouldn’t take precedence over carving out time to spend with friends and loved ones. I’ve still got a lot more to learn and still need to get better at the whole budgeting my time thing, but I’m getting there, one snooze at a time.

Waking up, however—that’s a whole different story. I’ll save that for another time; I’m far too tired now.