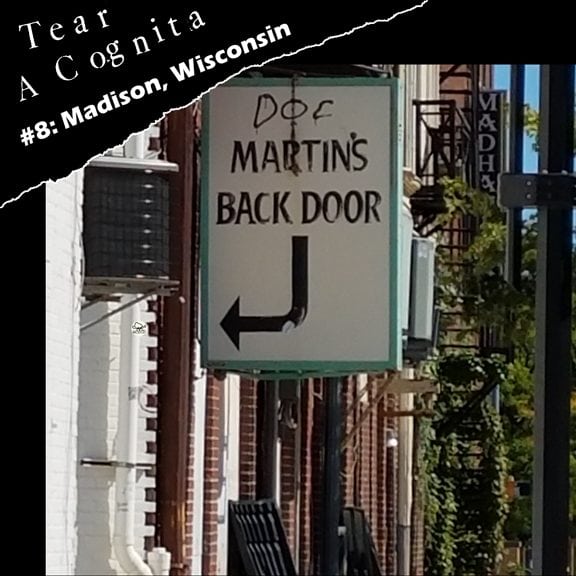 Tear A Cognita is a series of regional compilations put together by active participants in the community they're representing. The focus of this one is Madison, Wisconsin. If you're interested in what it takes to compile one for your own town, drop us a line here-
https://www.razorcake.org/contact

While not the most overlooked small city in the Midwest, Madison, WI is another blue dot in a vast sea of Midwestern red. The state capitol, college town that NY parents love to send their kids to for higher education. It's cheap (for them), and it's safe and out of the way for their kids, who love the party hard and work hard atmosphere. Madison was pretty progressive from the ‘60s to the ‘80s, so bands often stopped by as an in between. It's an easy stop between Chicago, Milwaukee, and Minneapolis. Lots of young progressives. The city has really grown since even the ‘90s. The nightlife is better than ever. Bars per capita is high. Average age is low. Cheap eats are available at almost any hour. Not to mention super cheap beer (almost no liquor tax in WI). And it's still a little progressive, being a college town and all.

Before anyone, back when we had democratic governors, they used to actually legalize marijuana one day every year. Every October the Great Midwest Marijuana Harvest Fest marches down State Street to the Capitol lawn, smoking joints and carrying bands on flat-bed semi's right up to the square, filled with bikers, hippies, heshers and punk kids. No age restriction. One year, helicopters were literally dropping bags of joints on to the crowd, but step off the square and risk a $14 ticket. Jaywalk and risk a $25 one. Skateboard and it's $35. Makes sense right? Now they still have one every year, but the never-ending string of right-wing governors don't sign it into law anymore. But the people are definitely weird here still. This place is filled with smart-asses too. Very good people here, but they don't fuck around, you'll get your ass handed to you in a smart-ass contest. And I would venture to say that they've been keeping Madison weird for even longer than they've been keeping them weird in Portland or Austin, and it is slowly encroaching the rural areas. So good things still happen.

If you want to stop and play a show, there are more venues and individuals that can help you out, than ever. Mickey's Tavern is the local indie bar smack dab in the best part of town. They also have really good food, there is never a cover, and the bands still get paid and fed, which is even better. If you want to play, email Liz at [email protected] For more of a rock club experience, but still a small indie feel, email Darwin at [email protected] The Frequency is Madison's favorite little rock club, right off the capitol square. And just outside Madison proper, in the heart of what is called the Driftless Area is a great place for indie and acoustic acts called The Shitty Barn, contact [email protected] for booking. If you still need help, or for more HC or heavier music, you can email Dave LuckyLacquers, at [email protected] or Chris from Kitschy Manitou Records at [email protected] These people can both help you set up a local show at a number of other independent or basement venues. And keep an eye out for the Thong Cape Scooter Man skooting the streets, Art Paul Schlosser jamming on near the Capitol or the legendary Marco Pogo trying to bring down the house at your show (PS: he gets in free, every show)!