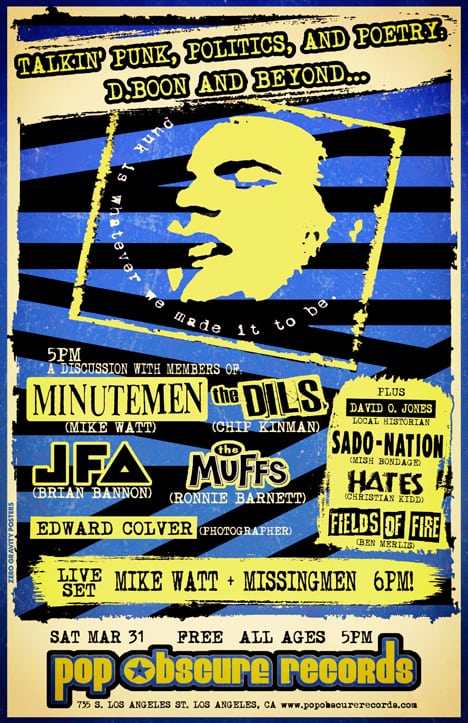 Talkin’ Punk, Politics, and Poetry: D. Boon and Beyond

Talkin’ Punk, Politics, and Poetry: D. Boon and Beyond

At 6 PM, Mike Watt And The Missingmen will play an in-store.

They will be focusing on navigating Trumpian times by looking back at punk history, poetics, and politics.

Earlier that day, David will be presenting at the 2018 annual American Comparative Literature Conference at UCLA, participating in the seminar “‘Stay woke’: The Politics of Protest Song.”  His paper, “Germs-filled Adolescence: Hardcore Punk’s Politicization of the American Neighborhood” is a folklore-based recounting of how punk transformed American communities.

That night, Ensminger will be playing drums for both the Hates (from Texas) and Mish Bondage And The Blokes (from Portland, Ore.) at Cafe NELA, mesmerizing LA locals with classic 1980s punk cuts!