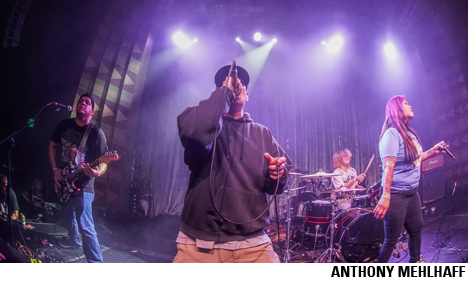 For our interview with Despise You (still available in issue #107) we hit up a handful of people about their first exposure to the band. We didn’t end up having room in the mag, but here are the responses we got. Check ‘em out!

I've been a DY nerd from day one. I can't pinpoint exactly when I first heard them but it might have been the Cry Now Cry Later comp or it might have been the West Side Horizons record (which is flawless). I do remember seeing the band in the dank basement of a Baltimore punk house with a pentagram spray painted on the wall in the early hours of the morning and all hell flying loose, notably during “Couch Slouch.”

-Will Butler / To Live A Lie Records

Despise You was always a mystery. I think the first time I heard them was on the split with either Suppression or Crom, and I was floored by the dark, bleak music and lyrics. They had an element to them that reminded me of early Suicidal with gangster-style writing/graphics and skateboarding imagery straight outta Venice that I was simultaneously drawn to and scared of! I knew they never played live and assumed they were a mysterious side project that bubbled up in a desolate garage somewhere in SoCal, but around 2011, I heard they were playing shows! I booked the first out of town show for them in San Francisco at Thee Parkside with my old band Voetsek, and was stoked when I heard that Cynthia from Gasp was their second vocalist alongside Chris Elder, and my old friend Chris Dodge was playing bass for them. They did not disappoint, and I've loved staying in touch with them and watching more and more people get the opportunity to see them. I love when a band is amazing musically and as people, and DY are some of the sweetest around.

My first time hearing Despise You was in the ‘90s. Maybe as the records were coming out or right after, I don't remember, but I do remember not being too impressed with the music over all. It was the lore and mystery of those backyard gangster parties they supposedly played that caught me. I saw a PCP'd up Excruciating Terror set at Gilman that was inhumanly scary and imagined DY to be in the same vein live. So when the material from what was supposed to be the split LP with MITB finally hit the streets I was fully in. There is a brutality to that session that really gets my blood flowing. Anyway when I did finally see them play many years later I lost my mind and threw people around the room. The mystery may be gone now but I will always appreciate being able to experience and unclouded anticipation for them.

Despise You – first time even hearing the name I thought it might’ve been misinterpreted or something. That was until I took grip of their Westside Horizons cassette tape that my good friend had let me borrow. Immediately got the gist. But that artwork, man. So low-life and awesome. I was only 14 (’99) at the time, had my share of punk (Rancid, Germs, DI, Hüsker Dü) and some hardcore exposures (Crudos, F-Minus, Minor Threat) but powerviolence, and this collaboration from a band that took place in the ‘90s? To think right here in Inglewood (my hometown) too. Inspiring to say the least.

Have to admit it took me a little bit of time to match the tracks to its song name - but that first time I heard Elder on “Been Lead,” that shit gave my ass chills. Funny thing is that it still actually fucking does. Only now by all the rest of their material.

My introduction to DY was the Despise You / Suppression split. I got it out of a distro when I was in high school. Never heard of either of the bands but the record looked cool so I bought it. I was immediately hooked. There was something way more raw, visceral, painful, and angry about this than other fast hardcore, powerviolence, or grind bands I had been listening too. Also mysterious and even sad at times. It wasn’t until I started picking up more of their records I realized how they stood apart from the rest. Someone was definitely listening to old death metal and punk. Never had I felt my soul crushed by the lyrics of a powerviolence/grind, fast hardcore band at this time. Lyrics about living in Inglewood and witnessing gang violence, drug addiction, police brutality, and this real sense of pain was really gut wrenching. Years later I would become friends with them, tour together, and put out a split with one of my favorite bands. I feel lucky as hell to of stumbled on to that record in high school.