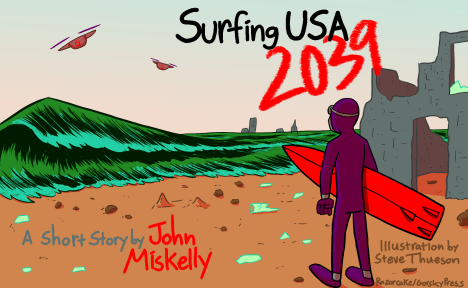 The sun took its first peep over the horizon, and Steve and Bill, neoprene calves aching from their squat positions behind two raised-building stilts, prepared to move.

“Right—hand signals from now on,” said Bill, fitting his respirator over his face and pulling his goggles tight over his eyes.

“Right,” replied Steve, doing the same. He pulled on neoprene gloves and duct taped each wrist to make the joint between the glove and drysuit as watertight as possible. He did the same to his ankles, then passed the roll to Bill. A mere drop of contact with the seawater would cause a week’s worth of unbearable scratching and a suspicious telltale rash, a dead giveaway in their next medical review. Any prolonged direct exposure to the water didn’t bear thinking about.

By the time Bill had sealed his suit, the sun was a golden crest, its first rays already glaring off the shards of broken glass that peppered the concrete between their hiding place below the building and the shoreline. Their knees clicked as they stood up. They quickly shook out the stiffness from their limbs, picked up their boards, and ran to the shoreline. This short sprint would have to suffice as a warmup. They couldn’t risk dawdling.

Even with their neoprene caps and the goggles that covered their nostrils, the smell of the water somehow seeped through. The aftermath of a tire fire, Steve would say. Bill insisted it was the exact aroma of gas station hot dog. With each duck dive, they struggled to see more than a few inches through the oil-black murk. The zero visibility plus the abundance of marine trash still left on the seabed made this break that much more treacherous. The last time they’d surfed this break, at a much lower tide, Bill had snapped a fin off on the top of a submerged ice cream van. On another occasion, Steve had come within inches of cracking his skull on a soccer goalpost.

Now behind the line of the breaking waves, Steve sat on his board and rested, his chest rising and falling with the exertions of the paddle out. A moment later, Bill popped up a foot behind him and mounted his own board. They exchanged a quick thumbs up and looked out to sea.

A set rolled in. They skipped the first, and Bill took the second. Steve watched him disappear over the drop, then followed his board’s nose and the top half of his mono-black form as it rose and fell in and out of sight with his succession of turns. Hundreds of yards behind Bill, he hoped he hadn’t seen what he thought he’d just glimpsed—a white blob moving along the shoreline, and the glint of sun off a camera lens. He put it out of his mind and caught the last one of the set.

Alas, by the time he made it back behind the line, the little drone boat was already circling Bill, who, catching sight of his friend, could only shrug despondently. Steve paddled up alongside Bill and waited. Sure enough, a buzzing overhead; a plop like a diving bird, and another drone boat appeared, joining the other in making a wider circle around the two of them. They turned and began paddling back towards the shore, catching a small wave each. The drones, airborne once again, escorted them as they did so, synchronizing their distance to their subjects and dipping and leaning this way and that, as the surfers themselves dipped and swept this way and that, carving white lines into the faces of their diminishing wave.

They didn’t remove their respirator masks until they’d reached their temporary base between the building stilts, not risking removing anything until as much seawater as possible had been toweled away. Finally, they unclipped the respirator and pulled away their caps.

“Two each if you include the waves we caught in. Not bad,” said Bill. “Almost worth it.”

Before Steven could answer, a familiar low-level humming reached their ears, no less innocuous in its apparent benignity than an electric toothbrush. Over Bill’s shoulder, Steve watched a small, ovular buggy trundle along the littered asphalt on caterpillar tracks. A tall mast-like structure rose out of the buggy’s roof. Atop of that, a spherical camera incorporating a light was mounted like a prying crow’s nest. There were no windows or doors. Two feet from the pair, the buggy stopped. There was a different whirring sound from within the pod; then a voice, amiable and inexplicably Aussie: “G’day guys! Good to see you (the slightest of giveaway pauses and change of tone), William. How’s it hanging, Stephen? Google is super stoked and blessed to be responsible for the care and upkeep of California’s beautiful coastline in partnership and accordance with the maritime and coastal state laws of California and the terms and conditions of Google. Part of our responsibilities is to protect our friends from endangering themselves and the wonders of our natural world by entering the open ocean. You can check our terms and conditions to verify this. Would you like to hear the terms and conditions?”

Dripping and shivering in the winter morning chill, Bill and Steve exchanged frowns.

“Okay,” said the machine. “To make your Google Coastguard experience as smooth as possible, we have already logged and catalogued this experience and will send you a mandatory donation request. Google is committed to protecting your privacy. Stephen, can you confirm your Google ID?”

“That’s no problem. We can access your details through our partners at Amazon. Can you confirm—”

Bill looked from Steve to the buggy and rubbed his forehead. “Dude, I’ve got a headache coming on, can we not drag this out?”

Steve’s frown deepened as he avoided his friend’s eye. “They bought the credit union Carol and I used, like, seven years ago. They own Miguel’s college fund too.”

The Google buggy continued, “Other Google customers who violated this section of the maritime coastal law have bought tickets to an Amazon Wave Pool and Water Park. Clean waves in pristine chlorinated water breaking all day long, brought to you by Amazon. A safe, clean adventure for family and friends. Your nearest Amazon Wave and Water Park is Disneyland Los Angeles, The United States of the People’s Democratic Republic of America. Shall I book tickets to Amazon Wave Pool Disneyland Los Angeles on Visa card ending 7811?”

“Your second nearest Amazon Wave Pool is Oaxaca, the Sovereign Territories of the United States of the People’s Democratic Republic of America. Shall I book tickets to Ama—”

Steve purposefully picked up his board and turned to leave, but Bill grabbed his shoulder. “You know we can’t just go, man,” he said in a low voice.

“My stomach’s doing backflips and my tongue feels weird.”

The buggy continued. “First time visitors get fifty dollars off. Caucasian visitors get free priority queuing. Only four hundred dollars for up to one hour’s surfing. Estimated queuing time for Amazon Wave Pool Disneyland is only three hours and twenty-two minutes.”

“Look, my friend feels ill and I’m cold and I have half a breakfast burrito in the van. We’re leaving.”

The buggy rolled a disquieting inch or two towards Steve. “It is contrary to the terms and conditions of your Google agreement to remove oneself from the vicinity while a Google employee, comfort officer, border protection officer, permanent resident guardian officer, or Google protection buggy is sharing or reaching out to you. Would you like to hear a legal definition of ‘sharing’ and ‘reaching out’ according to your Google terms and conditions?”

“Oh, man,” said Bill, clutching his stomach. “Look, we don’t want to go to a wave pool. We don’t care about the discounts. We’ll take the fine—”

“The mandatory donation and we’ll leave. My Google ID’s WilliamHarringtonCA4543.”

“Thanks so much, William. Can I ask you to rate your experience with Google Coastal and Maritime Buggy CA897 this morning?”

“We’re sorry your experience has not been satisfactory. Please complete this eighty-five question survey so we can improve our services—”

“Okay, whatever, five stars!” snapped Bill, who wobbled unsteadily with the exertion.

“That’s great! Google is super thrilled at the outcome of this shared experience…”

But Steve and Bill had become distracted by a new sound, another electronic whirring rising and falling in pitch and volume as it was buffeted on the rising morning breeze. They turned around to see another drone approaching.

“Hi, William!” began the drone, inexplicably Scottish and female. “It looks like you need a new drysuit. Would you like to know what drysuits are available right now through Amazon?”

“Our data says your drysuit’s damaged. We have a wide selection of winter drysuits from all major brands. Customers in your area and tax bracket have recently bought the following…”

Steve studied Bill from head to foot, then grabbed him and spun him around. Bill almost collapsed under the sudden movement and stumbled two steps sideways. Steve took a sharp intake of breath when he saw the hole—no bigger than bottle cap—torn in the neoprene just below Bill’s shoulder blade.

Bill tried to reply but could only grumble, droplets of foam and spittle falling from his lips. Steve tore open the hole. The skin beneath was tinged greenish brown, the color of toad, with red blotches like tiny volcanoes oozing white pus.

“I need a fucking ambulance!” Steve shouted to the hovering drone, as Bill fell to his knees and vomited.

“It sounds like you need medical assistance. There are two Amazon medical vehicles in your vicinity. The nearest is seventy miles away,” said the drone. “Estimated arrival time forty-five minutes.”

“He doesn’t have that long!”

“There are ten Amazon Prime Plus medical vehicles in your vicinity. The nearest is twenty miles away. Estimated arrival time five minutes.”

“Call that one! The second one,” shouted Steve.

“Our details show you are not an Amazon Prime Plus subscriber. Would you like to upgrade?”

Steve screamed a combination of expletives, picked up a rock and threw it at the Amazon drone, which wobbled slightly before righting itself.

Steve pushed his fist into his mouth and squeezed his eyes tight. On the grass next to him black blood trickled from Bills ears.

John Miskelly is thirty-three and lives in Asturias, Northern Spain