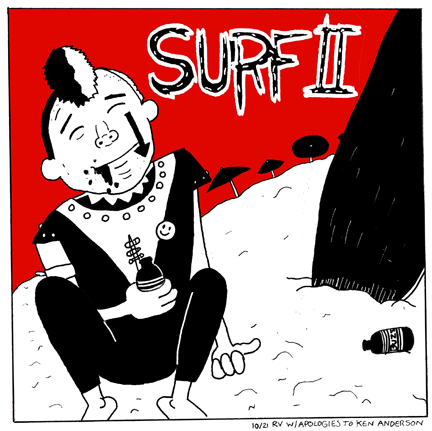 Surf II (the end of the trilogy) is a product of its time. It’s a raunchy, over-the-top comedy with little plot and padded out with gags. Menlo (Eddie Deezen) is a psychotic nerd living in a fortress underneath the waves who has only one goal, and that’s to kidnap surfers, force them to drink toxic cola, and turn them into oil-guzzling, glam rock, leather-clad punk zombies!

Our “heroes” are two nearly identical surfers Chuck and Bob, their nearly identical counterparts Lindy Sue and Cindy Lou, and their wrecking ball of a friend Johnny Fat Head who mostly only says “Bow bow!” And this is where I would tell you about what they get into plot-wise, but they don’t get into much! It’s these kids getting into shenanigans like skipping school to surf, making frogs race in science class, hooking up, surfing, going to see a movie about surfing, not hooking up to go surfing, occasionally running into the previously mentioned surf punk zombies, and surfing! Eventually, they have to win a surf contest and rescue their teacher, friends, and horrible dads. But that’s all in the finale.

This uncouth little gem has never been released on any format past a VHS tape until the good people at Vinegar Syndrome put out a beautiful 35mm restoration Blu-ray this year. This is something I have wanted for thirty years. Like most ’80s movies, it looks great on a color restored print.

The director’s cut of the movie is also included and it’s drastically different from the version I was used to. This is Randall M. Badat’s only directing credit. It was his baby and when the suits got ahold of it, they added a slew of cut-away shots of bare breasts and an annoying guttural groan every time the surf-punk zombies are on screen. The director’s cut has more surfing, more Jocko (played by the late, great Tom Villard), Cindy Lou and Lindy Sue as surf zombies, a live performance by Dick Dale, better music, and fewer breasts. The topless scenes still pop up but they’re less gratuitous. There is a very long scene where Johnny Fat Head challenges the surf-punk zombies to a  disgusting gross-out eating contest and I find myself dry heaving every time I see it. Couldn’t that have been cut, Mr. Badat?

It’s exciting to grow older and see lost relics like this come to the surface a thousand times better than they were originally produced. This is a movie to been seen with a group of friends who expect a ruckus. It’s extremely low brow but I’m sure if you’re like me, you can cringe and be delighted at the same time. Can you relate? –Rick V. (VinegarSyndrome.com)