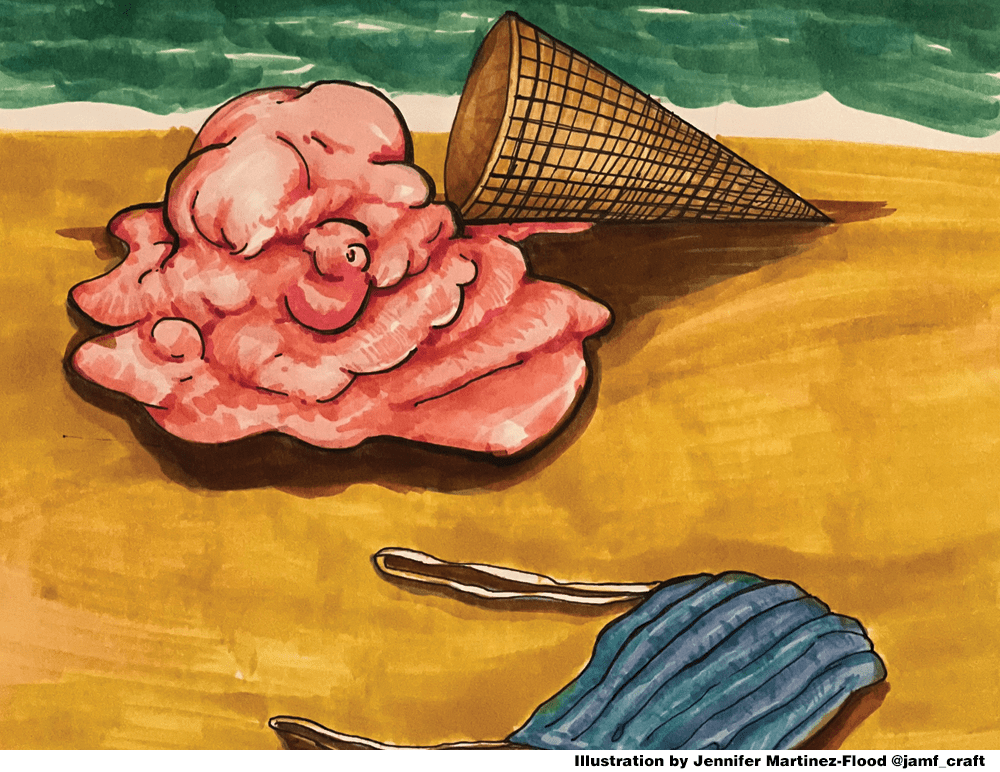 There’s just something about a heatwave that makes an existential crisis hit different.

Likewise, there’s something about an existential crisis that makes a heatwave hit different.

I started writing this in the last week of July. We’re almost on the other side of a heatwave, and there’s still over a month of summer left. And yet, summer always feels like a perpetual race against the clock. There’s still so much that can be jammed into these next six-to-eight weeks, but it seems like this is actually the end of the season.

People tend to associate the seasonal affective disorder with the winter. I’m not about to self-diagnose myself here, but even I assume the worst happens in the dark of the coldest months. But, lately, I’ve realized that I get hit with the hardest feels during the summer. And I realized it boils down to one thing: hope.

You see, there’s always a summer to look forward to in the winter. My fellow readers on the East Coast will recognize this feeling. When the sun sets at approximately 2:37 PM and you’re wearing layers upon layers, typing with fingerless gloves on, and constantly checking the weather report to see when you should venture outside to pull your windshield wipers up and begin pouring salt everywhere. It’s in those dismal moments where everything feels like an end rather than a beginning that hope springs alive. No matter how cold and isolating that time can be, there’s always a spring to give way to a summer, and a world of seemingly endless possibilities is there, just a few months away.

...What happens when you’re in the middle of a time of endless possibilities, feeling endlessly stuck?

So what happens when you’re in the middle of a time of endless possibilities, feeling endlessly stuck?

Summer brings with it a sense of urgency. There’s no endless summer, just a fleeting time that’s over before it even begins. A lot of summer feels like a race; there are never enough weekends to get done everything I dream of doing, and certainly not enough money to sustain those ideas. A big part of the problem is that, no matter how many years I’ve been away from school, the summer still feels like it only exists from the tail end of June until the very start of September. It’s the same stretch of time public pools are open. The Northeast “School’s out for summer” time permeates without regard of the solstice or the weather. And even if I have no school to mark this passage of time, I still feel it as if I do. Nevertheless, that’s technically two months of summer; surely that’s enough time to accomplish goals.

Well… not exactly. Despite the idea of having two months of freedom, it boils down to a handful of weekends for us Monday-to-Friday, nine-to-fivers. When those weekends get eaten up with characteristically un-summer plans, it feels like weekends are wasted. And that feeling of wasting time burns more than the sun kissing my pale skin.

Enabling my poor choices can, unfortunately, occur easily at any time of year. They just seem like better bad ideas in those long summer days into nights.

There’s this constant, nagging feeling of FOMO. Every sunny-but-not-too-hot day (which are already exceedingly rare), I wonder what happened to all the plans I once had. Suddenly it feels like all my friendships have evaporated; I’m no longer invited to barbecues, boat excursions, or beach trips. I’ll get the occasional “Let’s get a drink” text, but what’s so summery about that? Enabling my poor choices can, unfortunately, occur easily at any time of year. They just seem like better bad ideas in those long summer days into nights. Where are the road trips, the early morning hikes, the loud laughing and singing badly along to music with the windows rolled down? Where are my Len-music-video-come-to-life moments?

Sometimes, when I’m feeling sad, especially in the depths of winter and early spring, I like to believe that the summer will be filled with those moments. My happy place imagines just that: riding around with the windows down, headed to the beach with all my friends. The kind of adult summers I imagined I’d have when I was a kid, watching TV shows about people my age now.

… But it never is. Summer is always, without fail, a letdown. I build it up to be something bigger than it is, only to be consistently disappointed in how much of it is really just sweating through work and chores. Those carefree summer days of my youth, which were always trapped between the confines of school, of the clock ticking on those summer reading book reports, of buying school supplies—they’re still there, but without the wonder of waking up every day and deciding what to do. In a lot of ways, there was more freedom as a child, even if it was just choosing which cereal to eat and which morning cartoons to view.

Of course, summer does bring with it something to look forward to: fall. The true best time of the year, my favorite season that houses in it some of the best weather, activities, and holidays. But for my fellow New Yorkers, we know that peak fall only ever seems to feel about two weeks long, and the undue pressure I put on myself to do all the fall things is just as bad, if not worse, than summer. And after that comes the dreaded winter again. I find myself over-indulging, over-promising, over-delivering and under-delivering, waffling between disappointing myself and disappointing others. I try to live each season like it’s the last of its kind. And let met tell you: that apocalyptic mindset does nothing to help. It only helps me sink further into bad decisions, negative mindsets, and a complete disregard for my favorite things about said season. Summer and fall becoming, instead, seasons I dread or resent instead of ones I love.

Every season I both hype myself up and psych myself out about what’s coming next. If only I could just live in the present, enjoy the current moments and the time I have now.

Thank goodness there are a few weeks of summer left.

If only it wasn’t so fucking hot.

Jamie L. Rotante is a writer/editor/proofreader/mentor/Jill of all trades, so long as those trades involve words. She works as an editor and writer at Archie Comic Publications, Inc. She’s also a recently converted wrestling fan and would love to talk your ear off about it if you’ll let her. She is proud to call the near-outskirts of New York City her home, where she lives with her husband and their small-yet-thriving window plant collection. You can find her on Twitter @Jamitha and at www.JamieLeeRotante.net.