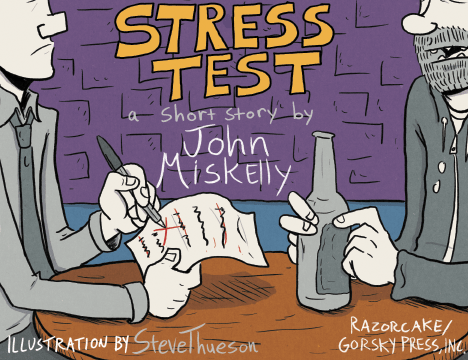 Craig picked up his beer, took a tentative sip, and placed it back down. Then he picked it up again and started picking at the label.

“Kind of a big question, considering the circumstances,” replied Gene, sitting with his legs and arms crossed in a boss-like manner, his chair pushed back away from the pub table and his own bottle untouched.

“I guess I have seen some shit. I saw some shit. Legitimate shit. I mean, there’s not much to see after something like that. The impact is so big, I guess, and the blast is so intense, everything sort of burns up and disintegrates. There were some chairs and stuff.”

Craig looked away and took another sip. “You don’t have to go into details,” he said.

Gene had barely finished hanging his clothes on the makeshift clothesline when the plane roared over, annoyingly on schedule, louder than he could have imagined. He made it to the upstairs window just in time to hear the crash sear the early evening peace and see the fireball lunge upwards from beyond the rooftops. He wasn’t in an elevated enough position to tell for sure, but by his calculations it looked to be a direct hit. He put on his coat, selected a suitable hat, grabbed a pack of smokes, and walked the scenic route to the crash site.

“So that’s not so bad then. Just stuff and blood. I mean, blood, sure that’s intense, but not like, a child’s foot or whatever.”

“No,” said Gene. “There were no children on board.”

“But I guess stuff can trigger things, like if a guy’s into a sports team and there’s a piece of, like, an Arsenal FC mug and its like, ‘These were people with lives and tastes and mates and shit.’ Or like a badge of a not-shit band and you could be like, ‘Shit, I thought that band was okay. We could’ve been friends under the right circumstances. Maybe he played guitar too.’” He took a large gulp of beer as if to dam the torrent of words. “Or whatever,” he concluded.

“Yeah, I mean, sure, everyone’s somebody, right? Even that guy,” said Gene.

“How many were there in the end?”

“Ten: him and a few board members, an accountant.” Gene feigned an idle interest in a beer mat and adjusted the pitch of his voice. “So did you find out pretty quickly?”

“Yeah, the press are so quick these days. It was, like, immediate man,” said Craig, clueless, oblivious, digging himself further into the hole of his own making.

There was already a gaggle of townsfolk rubbernecking around the crash site, texting, tweeting, looking concerned, and generally bearing witness. Among the uniforms of the blank-faced emergency servicemen and women, Gene spotted the unmistakable slouch and perpetually hungover, indifferent stare of the local journalist. He beelined through the crowd towards the journo, peering beyond the cordon and dutifully shaking his head at the “sheer waste of it all, such a shame.”

“Looks like you’re the first with this one,” he said, standing at the guy’s shoulder, arms folded and sneaking a look at his notebook.

“Nah. It’s already on the BBC and a couple of blogs. Twitter, innit?” said the hack, lazily sweeping his hand in front of him at the crash and the crowds and the newest manifestation of his growing professional irrelevance.

Gene flipped the lid of his phone and checked the nationals. Sure enough, it was there—private plane, ten on board—oh dear, plus one cat, that was a shame—company stocks down, staff in mourning, oblique references to Islam.

He also had a text from his mother: “are u ok?” This was a biweekly event and thus most likely not connected to the crash and his proximity thereof.

He waited another ten minutes. Finally, a text arrived. “Saw the accident. Just checking ur not dead u prick?” Better than nothing, despite the “banter”-cloaked repression of the emotionally-stunted British white male.

“Do you ever wonder why we’re friends, Craig?”

There’d been a moment of silence between the two during which Craig had developed a deep interest in the curvature of the table edge. The sudden directness of Gene’s question induced something of a mild spasm, like an afternoon drunk waking himself up with his own snoring.

“Well, when have we not been friends? We always have been. Since school.”

“Yeah, it’s—we’re mates. We’ve always been mates. It’s just how it’s always been.” Craig took a hasty suck of beer. “And we like the same things, like … pubs. And beer. And bars as long as they don’t play music too loud.”

“The thing is, Craig, if everything was kept alive purely because it’s the way it’s always been, we’d still have public hangings and animals in circuses.”

“Look, what’s this about anyway, Gene?” said Craig, making a poor attempt to muster some kind of authoritative tone.

Gene uncrossed his legs and leaned forward out of his chair, fixing Craig with a hard stare. “What this is about is you taking four days to check if I was alive after a plane crashed half a mile from my house.”

Gene grimaced and averted his gaze during Craig’s spluttering theatrics of bogus indignation, all sardonic smiles and disbelieving shakes of the head.

“I’ve had a lot going on,” Craig managed. “There’s a restructuring at work, some stuff with the house…”

Again, the derisive laugh of bullshit incredulity. “Four days isn’t that much these days; time just disappears. Can you believe it’s almost June…”

“How many days of decomposition is that? What would my body look like in the time it took you to check I wasn’t dead?”

“Well, it depends on the conditions, obviously!” said Craig.

“You’d probably still be okay for an open casket.”

“This is beside the point,” snapped Gene.

“You bought it up. And what is the point anyway, Gene?”

“The point is that you’re a bad friend, you failed the test, and I’m striking you off.”

“Half a mile isn’t that near.”

“In aeronautical terms, a half mile is like a tenth of a millimetre or something. I’m using my near-death experience as a kind of social stress test.”

“Yes, like a bank, one in need of major structural reform.”

Gene retrieved a crumpled piece of paper and a pen from his jacket pocket. On it were scrawled various names, some scribbled out, others with notes beside them.

“This is absurd,” said Craig, slumping back in his chair. “Couldn’t you have just unfriended me on Facebook or some other passive aggressive shit like that?”

Gene ignored him and scribbled out the name. He peered down at the page and sucked the end of the pen like a crossword player. “Does Sarah J still live round here? I hope I can get to her before…”

“Don’t tell me you’re striking her off too?”

“Nope, she passed,” said Gene. “Got quite a touching Facebook message off her the next morning.”

Craig took another deep swig of beer. “She passed? How nice.”

A silence ensued as Gene studied his list and Craig observed him resentfully across the table.

“So when was the cut off for acknowledging your not-dying?” Craig asked.

“Ostensibly, it was twenty four hours—but they have to take a whole load of other things into account—so there was no exact…”

“The company, they’re called… I can never recall. It’s one of those meaningless acronyms that you’re not supposed to remember.” Gene fumbled with his wallet, pulling debit cards and receipts out onto the table. “Here it is,” he said, tossing a card to Craig.

Craig peered at the off-white rectangle and read out loud. “‘Streamline your life. Stress Test Your Relationships. Let us knock the kinks out of your buckled social circle.’ Holy shit. So this was deliberate?”

“Ten board members of a big pharma company are dead. Collateral damage. They won’t be missed.”

“People were worried. I was worried.”

“Clearly not that worried, hence…” Gene spread his arms wide and looked about him. “…this.”

Craig pinched the bridge of his nose and closed his eyes tight. “This is…”

“Genius?” said Gene. “It really gives you peace of mind. Just knowing who’s got your back, who’s thinking about you. No more doubts or dark thoughts or ambiguity. Like, ‘Should I call Craig? No, because I know he doesn’t give a fuck.’”

“Well, if you were a better friend maybe you would have worked that out sooner.”

Gene downed his beer, slammed it decisively onto the table, and got up.

“Keep the card,” he said. “They’ve got all kinds of methods—blackmail, entrapment—there’s all types of ways you can test someone’s loyalty. You could do one for Jessica. Are you still seeing Jessica?”

“Cheated on you? That’s exactly what I’m talking about. There’s this special they do to work out your best man. It’s genius.”

Gene put on his coat and got up with a stretch and a heavy sigh.

“Anyway, I get a discount if I can get to everyone on this list and submit it by the end of the day, so I’m off.”

And with that, he left the pub, leaving Craig sitting in a pallid stupor. Two seconds later, Gene poked his head around the pub door. “Oh yeah, and if you’re thinking of telling anyone, like the police, etcetera, I wouldn’t bother. I mean, these guys downed a plane and no one has a fucking clue. So what I’m saying is going to the police probably won’t end well for you. Bye forever.”

And then he was gone.

John Miskelly is the Absolute Undisputed Commander in Awesome of BonusCupped Fanzine, which may or may not exist depending on when, where, and who you ask. He is thirty. More of his short stories exist on this website. That is all the information worth knowing about John Miskelly. Good day to you, sir.