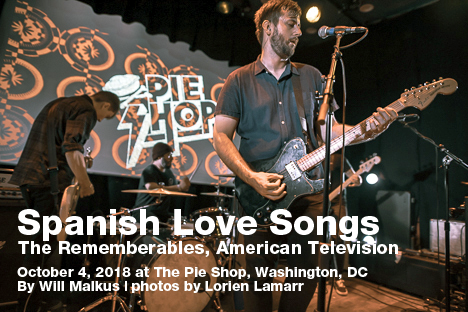 Spanish Love Songs, October 4, 2018 at The Pie Shop By Will Malkus

Spanish Love Songs, The Rememberables, and American Television, October 4, 2018 at The Pie Shop, Washington, DC By Will Malkus

The morning of October 4, 2018, just eight short hours before I was supposed to drive to our nation’s capital to see Los Angeles, Calif.’s own Spanish Love Songs, I woke up with a 100.3 degree fever. I immediately panicked; I had been waiting months to see these very nice, very talented people play again—and to top it all off, this show was happening at the new venue above the Dangerously Delicious pie shop. I couldn’t believe that my body would betray me like this, but I also couldn’t deny that I felt like absolute shit. I drank some Emergen-C, called out of work, downed some NyQuil, and crossed my fingers. Six hours later I woke up soaked in my own sweat (which I’ll admit felt extremely on-brand) and my fever had broken! The gig gods had heard my prayers! I was nowhere near 100% but I was going to make it this show come hell or high water, because did I mention it was also storming?

My good luck endured and Lorien Lamarr (Aretesophist Photography) offered to drive, so all I had to do was make it to her house and we were on our way! Until, that is, we hit immediate gridlock right outside of Baltimore. Rush hour traffic is no joke no matter what city you live in, but Washington, D.C. rush hour traffic is a fucking nightmare’s nightmare even when it isn’t raining. Still, it did feel extremely fitting that we were stuck in bumper-to-bumper traffic on our way to see a band from Los Angeles. I spent most of the trip trying not to fall asleep or talk, but by some miracle we made it to the venue, found street parking, and got inside while the first opener was still tuning. I claimed a space off to the side, put my earplugs in, and tried to figure out if I was freezing was from being sick or if the pie shop was just pumping the A/C hard. I was so out of it I didn’t even realize that other friends had arrived and were standing right next to me.

First up was American Television, a four-piece melodic punk outfit from the D.C. area that I’m always jazzed to see, not only because they rip but also because they put on some of the best DIY shows in the city as Breakin’ Even Presents, including this one. The American Television boys organized the last show Spanish Love Songs played in town as well, and it’s a good combination. As drummer Bryan Flowers donned a hat shaped like a giant piece of pie and frontman Steve Rovery put on a pair of cardboard glasses that read “X-Ray Specs,” it was clear that they were not just here to play but also to entertain us. I’m sure the rest of the crowd that made the journey out to the show in the rain appreciated the energy they brought to the room, because my sick ass sure did.

American Television played a tight twenty-minute set of blistering punk rock across all flavors, from the pop punk personal favorite “The Creek” to the decidedly heavy “Explosions in This Guy.” It seemed like they were just as excited to get to the rest of the bands on the bill as we were because they barely stopped playing long enough to tune. But like the professional he is, Rovery still managed to slip a merch plug into a song intro: “This song’s called ‘Death Defier.’ We got coffee over there called Death Defier, drink it or something!” The standout track of their set for me was “Better Living through Chemistry,” which showcased both Jerred Lazar’s specific brand of shredding and some of bassist Edwin Wikfors’ best work. It was a good start and I was feeling energized, but I was worried. It was still early—would I peak too soon?

Fortunately, local fuzz pop band and winners of the “Best Facial Hair of the Gig” award The Rememberables had me covered. Fresh off their most recent tour, this was the only band I had come to the pie shop knowing virtually nothing about. I spent a long time trying to figure out what their sound reminded me of—was it new wave? A little bit country? Finally, I cracked the code. If you took the best parts from every song on a ’90s college station and combined them into one band, it would probably sound a lot like The Rememberables. There were elements of Dinosaur Jr., Smashing Pumpkins, Nirvana, and the Lemonheads mixed into the sludgey wall of sound they produced, and I found myself repeatedly getting lost in their music. I honestly couldn’t tell you if each song was three minutes long or ten minutes, and that’s not a complaint. It was nice to trance out for a half hour, specifically to Tim Bean’s blown-out, driving guitar and Binh Ngo’s Paul Westerberg-style vocals. The Rememberables had mercifully gotten me through another set, but now I had to make it through the main event.

If I’m being honest, I was kind of worried in the minutes leading up to Spanish Love Songs. The whole “being sick at the gig” angle was a fun one that I knew I was going to use in my review, but I still felt awful. I was genuinely worried that I would have to manufacture a happy ending about rallying for one of my favorite bands, but as soon as I heard those opening notes of “Nuevo” I knew I wouldn’t have to manufacture a damn thing. There was no way I was doing anything but screaming lyrics back at the band tonight. Schmaltz, their 2018 release, is hands down my album of the year, but it’s hard to describe to other people. It’s about being depressed? And how the world is incredibly fucked right now? And things are never going to get better? But like, party jams.

Every member of Spanish Love Songs is one of the nicest people I’ve ever met, and they have a great group dynamic. While Dylan Slocum’s warbling vocals are undeniably the focal point of their sound, Kyle McAulay on guitar is probably the most fun member to watch on stage as he emphasizes some of the best lyrical moments with gestures and back-up gang vocals. Every time I’ve seen them play Kyle seems like he’s having the time of his life, and I really appreciate the way he looks out for everyone at the show. I once saw him stomp out a lit cigarette mid-song that some asshole had dropped on the floor of the venue, and at this particular show he took charge of distributing beers to every member of the band only to discover that drummer Ruben Duarte had already smuggled three behind his kit. It cannot be overstated that Spanish Love Songs are good people, and as always with their tours, Meredith Van Woert’s keys were sorely missed.

There was really no other way they could have opened this set other than the same perfect two-song combo that Schmaltz opens with. “Nuevo,” a stripped-down rumination on what it means to get old in punk that never fails to leave me in tears, swells into a burst of guitars before transitioning seamlessly right along with Slocum’s vocals into the much faster and more energetic “Sequels, Remakes, and Adaptations,” where I was happy to note they changed the last, echoing instance of the word “brothers” in the chorus to “sisters.” That’s no surprise, considering the subject matter of a lot of Spanish Love Songs tracks centers on the state of society and trying to cope with the prevalence of hate and abuse, along with our own personal demons, but it’s always welcome to see more inclusion in the “brotherhood” of punk from artists I admire as much as this group.

“We’ve been working on those rock’n’roll endings!” Dylan joked at the end of “Bellyache,” but it actually does show. Schmaltz is both an easy and a tough record for me to listen to; the songs are incredibly catchy and endlessly sing-able but are also sometimes all too real in their subject matter. This has earned Spanish Love Songs a reputation as kind of a “sadboi” band, but their party potential has always been criminally overlooked in my opinion. Songs like “Joana, In Five Acts” and “Beer & NyQuil” became joyous celebrations of solidarity that helped relieve our collective frustration and bring us all together as a crowd. Even something as simple as shouting the chorus of “The Boy Considers His Haircut,” which expresses a desire to find a flattering haircut that hasn’t been claimed by Nazis, is such a relatable sentiment that simultaneously acknowledges how fucking absurd it is that we have to deal with Nazis co-opting hairstyles in 2018. I knew my voice was going to be shot the next morning but that didn’t stop me from screaming it raw during “Buffalo Buffalo,” a perfect closer if ever there was one.

The night ended with Spanish Love Songs mercifully skipping their acoustic tearjerker “Aloha to No One” and thanking all their homies for coming out. I prepared myself for the long journey home to my bed. I had survived the show, and actually felt better than when I’d arrived. I would never try to claim that a night of good music and good people had cured me, but to quote the aforementioned song: “You might wake up, but you’ll never be better.” Maybe it’s not always about feeling better; maybe sometimes it’s about going on with your life anyway.

Will Malkus is a writer, librarian, and concert photographer based out of Baltimore, MD. You can check out his photography portfolio at charmcorephoto.com/.