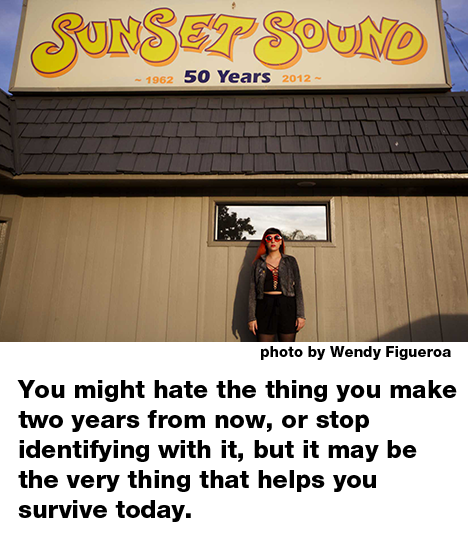 In the first installment of “Sound Advice,” Razorcake’s advice column, cosmic femme punk Taleen Kali addresses identity as it pertains to creative mojo. Send all questions about punk rock, self-care, and creativity to @taleenkali via message on Instagram!

Dear Taleen,
I try to think about my activities and what I’m either letting define me, or how my me-ness is attempting to define a set of activities. How/where do all of those things meet in a way that you could point to your “self”?

The Armenians call it “armat,” meaning root source. The Egyptians call it “the golden ray,” in reference to alchemy’s universal elixir. In Vedic, Hindu, and certain yoga philosophies it’s called “purusa,” referring to an unchanging spirit.

They’re all concepts of “source energy,” and what you call it is up to you. My favorite thing to call it lately has been “mojo.”

When I’ve got the link to that mojo, it doesn’t matter what I’m making or how it defines me. Why? I’m linked to something bigger, tapping an endless well of creativity.

More so now than ever we’re accepting identity as fluid, and thanks to the power of the internet and self-publishing, it’s never been communicated more effectively en masse. The post-binary punk rock queer universe has always known this, only now it’s being driven further by a younger generation that’s simply more open-minded and accepting of fluidity. The future isn’t patriarchal. The future isn’t female. The future is fluid (it always has been). It’s punk rock, and that’s hard to miss unless you’ve truly stopped paying attention.

Although we’re living in darker times than usual, this is how nature has been working overtime since day one.

This column itself may outgrow its tone in a mere season. Our L.A. Indian summer will effectively burn out, another DIY venue will get shut down, and a new guard of punk kids will start carving out their own spaces.

This is not to get neo nihilist or hopeless on you, pal. In fact, it’s all the more reason to keep connecting with your own personal brand of mojo: that state of flow you get into when you’ve been riffing on that shitty bass line for twenty minutes; and the idea for the entire bridge idea comes to you all at once; and it’s like you’ve been at once transformed and transported.

My personal drug of choice to access this mojo is most notably music, and I also partake in yoga, journaling, writing, and reading. This connection to this source—identity be damned—gives our spirits a higher sense of purpose, which in turn tethers our lizard brains to something bigger than us in our ever-shifting modern reality. And it’s a generative source—meaning it doesn’t dry up—providing much healing and inspiration. Furthermore, we amplify that personal mojo when we share the things we make in community, offering it to the collective. Here it has the ability to create shifts in consciousness, art, society, and the world at large.

Let’s just keep making shit and try not to get too tripped up by the tidy packages society and capitalism wants to pack them into. Connecting to the mojo is the point. Making for making’s sake. Attempting. Failing. Ultimately, connecting.

You might hate the thing you make two years from now, or stop identifying with it, but it may be the very thing that helps you survive today. And you never know who that’s going to help someday.

Everything changes. Including your self.

Thank god for the damn internet. For the time being at least, it has the possibility to connect us—change and all.

Got a question about punk rock, self-care, or creativity? Send your questions to @taleenkali on Instagram.

Taleen Kali is a writer, musician, and artist native to L.A. A multi-hyphenate to the core, she is founder of cult favorite DUM DUM Zine and Kali Punk Yoga.

Look out for her solo debut Soul Songs out now on Lolipop Records. Poetry, essays, and photography appears in The Onion, Filter, SPIN, Entropy, TL;DR Magazine, The Bushwick Review, Funhouse Magazine, and zines in all your favorite cities.

To see more of her work visit taleenkali.com, and check out her Patreon