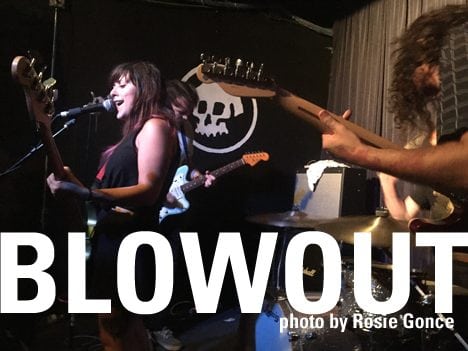 Nowadays, with how easy it is to get music online, shows are more important than ever. No matter how much free music we can listen to, or how many concerts we can stream, nothing replaces going to see a live show. Whether you’re someone who enjoys going to shows, to support friends, to have a good time, to see a band you’ve been following, or to just get out and hear something different, everyone wants to be entertained and enjoy themselves. With the balance of good (enough) musicianship and amusing showmanship, along with a fun audience and comfortable ambiance of the venue, one can have an unforgettable experience.

That’s what this night was. It was Saturday, September 10, at 1,2,3,4, Go! Record Store in Oakland, Calif., and the bands Snooze, Blowout, and Walter Etc. were playing. I wanted to review the experience of the show, including the location, the audience, and the overall kind of night it was, instead of detailed particulars of each bands set. So I went undercover as an interviewer of the audience to get an inside scoop of what people really think of the bands and to see if they were having a good time at the show. In an attempt to gather some fans’ opinions, I chatted with and eavesdrop upon randomly selected people who were candidly reflecting on the bands and venue. Their identities will remain anonymous, especially since they did not know that they were being recorded. (Note: This is legal, because we were in a public space where there is not an expectation of privacy, and I had my recorder in plain sight. I looked it up.)

1,2,3,4 Go! is a quaint record store in Oakland that also has a small room in the back where they put on shows. It has a capacity of around eighty people, an appropriately sized stage, and a couple tables in the back for merchandise for the bands. The record store itself has a fun selection of rock’n’roll/punk/alternative used/new cassettes and vinyl. Throughout the night, people mill around looking at music, buying music, and taking photos in the record store’s vintage photo booth. It’s an all-ages show for eight dollars and around 7:30 PM, it’s on its way to getting packed. On either side of the record store are Homeroom and Homeroom To Go, which are both mac‘n’cheese restaurants, creating a lively couple of blocks on 40th Street in Oakland.

The first band, Snooze, was described to me by someone who had seen them before, as a “Weezer worship band.” After hearing them, I instantly understood why. They were a group of five dorky-looking guys and every song was the tempo of Weezer’s “The Sweater Song,” but with many more guitar solos. Throughout their set they maintained a packed room with more than half of the audience bobbing their heads to each song. One drunk girl flopped around the dance floor, holding her Homeroom leftovers in a brown bag above her head as people nervously smiled at her and edged away.

After they played their last song, a group of guys next to me all took their earplugs out and said “Well, that was sick,” and “Yeah, that was tight.” It seemed like a lot of people had seen them before and they had a lot of friends there, which made sense when the singer made a comment about being from Oakland, born in 1994, at the hospital nearby there. Many people actually ended up leaving after Snooze played, but since new people kept showing up, it stayed busy throughout the night.

Next was Blowout, a four-piece with female lead vocals—who also plays bass—two guitarists, and a drummer. They play indie garage rock with jangly guitars and busy, tight drum beats. The singer’s voice is sweet and strong and all four musicians are talented and comfortable on stage. They also had many friends in the audience, some of who at one point started chanting, “Brad! Brad!”—who was obviously one of the guitarists. I asked a giggly girl in front if she knew Blowout and she said, “It’s my boyfriend’s friend’s band and we’ve seen them before. They’re awesome!” She and her boyfriend ended up giddily dancing together throughout the entire set.

The room was packed, again with many people bobbing their heads, some with arms crossed or hands in pockets, yet seemingly captivated and thoughtfully observing the band’s performance. The group of friends danced wildly and uninhibited. I noticed one guy up close to the stage, but off to the side, mouthing the words along with the songs and clapping his hands on his legs along with the beat, smiling supportively at the rowdy crowd of friends. A real fan. After the show he left with a bunch of merchandise from all the bands, under his arm.

People generally seemed very impressed with Blowout, as the room remained packed for their whole set and all the members got swamped with people complimenting them and buying records and T-shirts. After chatting with their drummer, I discovered that Blowout were coming to the end of their five-week tour around the states and heading back to Portland. A few days after arriving in Portland they were going to be flying to Hawaii to play a couple more shows. Unfortunately as Nick, the drummer, was sharing this with me, we were approached by some friends of his, who had just then got held up at gunpoint about a block from the record store, while walking to their car. They both got their wallets stolen and were understandably very upset. It was definitely an unforgettable evening for those two guys. All the mugger got was three dollars.

After Blowout played, I hung around outside the record store, waiting to see Walter Etc. While many people were standing in groups strewn across the sidewalk, smoking cigarettes, and eating mac’n’cheese leftovers, I was approached by a very intoxicated guy, dressed nicely in a collared baby blue shirt, who chose to share with me his experience of Oakland and Walter Etc, with a little perspective of Blowout as well. Apparently, he and his friends came to see Walter Etc. but first had gone to Plank at Jack London Square. He really wanted to tell me about it. This is what he said (candidly, and word for word, spoken in a Spicolli-like voice):

“So we ordered burgers. We ordered Jack London Square wingnuts and we were like, dude, this is really fun. So we hopped in a cab and came here to 1,2,3,4 Record Store. We’re gonna see our friend’s band, Russell Bussell playing the drums on the squadron… he plays the drums, dude! In Russell Mitty! Walter Mitty!”

I was confused because I thought that they were called Walter Etc. I was then informed by someone who was part of our conversation circle that the full name of the band used to be Walter Mitty And His Makeshift Orchestra.

“Ground control to Major Tom!” he yelled after I finally stopped laughing and understood what he was talking about.

He went on. “So it’s like Walter Etc. or the Walter Mitties or all that ying yang bullshit, like, but now he’s playing the drums (note: Russell is in the band, however does not play drums in the band) and I’ve known him since diapers and all of the sudden his fucking parents showed up and his sister who’s super hot showed up and so now I’m just like trying to play it cool, calm, and collected.”

He paused and smiled. I then said kindly, “Well, I think you are.”

“Yeah, totally.” He said confidently. And continued on, “All of the sudden they were like ‘Cash only.’ and I was like ‘Pfffft! Whoa. I have no cash.’ So I marched over to the 7-Eleven, which was like a stone’s throw away, and got like forty ducats, and was like ‘Hey, can you guys go?’ and they were like, ‘It’s free, dude. What are you talking about?’ And I was like ‘Aw, thanks! Thanks a lot!’”

Slightly confused but deciding to move on, I asked him if he’s heard of the band Blowout.

Without skipping a beat he dove back into his quick rhythm of talking and intense eye contact and said,

“So I visited my best bud Russell in Oregon a month ago and he was like ‘Dude. These are the boys. They’re in Blowout. They’re fucking rad.’ And I was like ‘Oh, yeah? Sick, dude!’ So we ended up staying up all night with the boys… and like… all of the sudden… I’m like, trying to walk in and they were like, five bucks, and I was like, ‘Dude, what do you mean? I’m in the fuckin’ band, dude!’”

Realizing he went back to the earlier part of our conversation, I was curious if he was actually allowed in the show. “So you got a stamp?” I asked.

“So long story short,” he continued, “I went to 7-Eleven and pulled out sixty ducats and walked in and they were like, ‘It’s free of charge! Get in there!’ And I was like, ‘What do you mean? I just walked like, fuckin’ six blocks away, with my boys, and got a six pack of tall boys, dude! It’s ridiculous! It’s complete anarchy here in Oakland.”

After another story about how he didn’t want to tip the ferry bar waitress because she cut him off, he eventually made his way inside. A guy who had witnessed our entire conversation was unlocking his bike when I asked him if he was going to watch Walter Etc. play at all. He smiled and said,

“No. That guy is the epitome of their fan base. And…they play kazoos.”

But inside it was so packed that we couldn’t even get in and people were going crazy dancing to them. We had a chance to meet them and they were friendly and humble, with a great sense of humor about their friends and fans. We all know that one person can’t really represent an entire fan base. But even though that intoxicated guy wasn’t always making sense, I actually enjoyed talking to him, and I could tell that he was genuinely have a very fun evening.

The whole night was a blast, but the highlight was definitely Blowout. They seem to be on their way to blowing up. The buzz that they have going right now is almost tangible when they play live. I predict we will all be seeing more of them in the years to come. As people get to know their music, their audience (at least their audience here in Oakland) will loosen up, take their hands out of their pockets, stop staring in awe, and join all of Blowout’s friends who are dancing and moving around to the music.

Rosie Gonce is a musician and writer who lives in Oakland, Calif. with her husband and cats. She enjoys going to see live punk and rock’n’roll shows, going camping, and being with family.