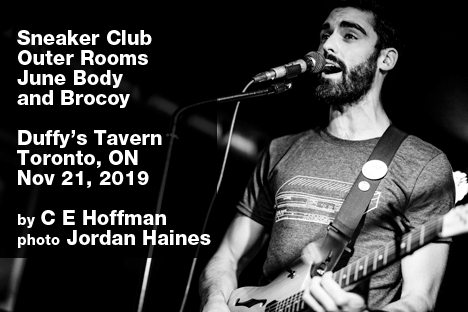 It’s raining. When my friend and I alight from the subway we’re unsure which way’s West.

Duffy’s sandwich board is our beacon. Not too far beyond it we see our old, dear friends unloading gear. Exuberant hugs are interrupted by the encumbrance of amps et al.

We enter a delightfully cozy venue. The stage is nestled on the lower level, which feels like a cocoon where folks are free to sling their coats over chairs and chat with strangers who turn out to be the first band.

During sound check, the singer boasts a muddy twang, which I’m relieved to find is dropped in their set.

Indeed, Sneaker Club is full of pleasant surprises. Crammed with sexy floods and salty groove, a sound that melts in your mouth and demands you dance, or at least move.

More than musicians, they’re performers. They put the “entertain” in “entertainers.”

They are definitely giving more than they’re getting from the crowd—such is the cross of the opening act.

The singer is a special sort of storyteller. This along with the long rock solos from the lead guitarist remind me of The Hold Steady, a band that will forever remain a favorite.

I’m suddenly nostalgic. I remember one of the first gigs I ever covered: Art Bergmann back in Edmonton. Some guy told me not to stand so close to the stage taking notes because it made me look like a noob.

Almost ten years later, I’m still doing it, and I don’t give a fuck.

I thought I was done writing about them, but then they finish with a School of Rock cover!

I watch while Outer Rooms sets up an excess of pedals, candy apple red keyboard, and a guitar that Alex and I agree is very sexy.

They create a triangle on stage, the pinnacle shape for channeling energy. Looking more at each other than us.

What I love best is the double vocals. Both keyboardist and guitarist sing in tandem, an affect nothing short of arresting. They create the type of tension that makes you stand on your toes and
your hair stand on end.

I don’t know what they’re singing about but it sounds like something they lost, or wasn’t what they thought it would be.

Yet there’s a playfulness underneath, like skipping down memory lane with an old, dear friend.
Maybe even a friend you had to leave behind.

“Keeping up appearances and waiting for the world to end”—this sentiment stems from the least melodic yet possibly most poignant piece, if only for the crowd reaction.

Local fans are the best support a band could get—the sort who memorize your songs long before they’re on the radio.

Full disclosure: June Body consists of very dear friends. They are the reason I’m here; this TO gig is the kickoff for their mini-tour. I however am bound by objectivity, and besides, I didn’t tell them I’m writing up the gig in case the article didn’t run.

June Body is best appreciated in a room where you can hear the lyrics. They’re like Death Cab For Cutie, but actually interesting. They are poetry backed by insane stage action. They are a force of nature, and whatever lies beyond it.

June Body’s the kind of band bound to spread your heart wide open (with consent, of course.)

Their melodies map out luscious moments, on and off stage. Like all music, it only works if you give in: to those stirring vibrations, the messy hair, that line of sweat down your back as you dance, hips aligned to that fine, supple stream of sound.

A bass never looked so badass like it does on Alex Callaghan. No one makes sense behind a mic like Connor; no one gets shirtless as fast as Johnny on drums.

I know for a fact Alex requires at least twice this stage room to move as much as he wants. But there’s plenty space for witty repartee, which this band has plenty of.

The songs don’t necessarily stick in my head, but their stage show always does.

I want to go, but I may as well catch the last band.

The singer thanks those of us who stayed behind. Without any ado, they crash right in, their passion a shock to everyone.

What they lack in audience they make up for in volume. It’s too loud for my taste, but you gotta respect those bands that insist on going up to 11.

The vocals are lush, masculine, raw with emotion and a little bit of mystery. Their songs are proper stories complete with denouements and plot twists, but despite all of this, I’m emotionally and physically exhausted. Most everyone seems to feel the same. Such is the bane of being fourth on the bill.

I’m distracted. I want to chat with friends I haven’t seen in forever, go somewhere my ringing ears can chill. Almost more than anything I want to go write.

It’s fine being out in the world, but we all need a place to go home to.

“We used to get drunk, we used to get so high”—that’s the line that drags me back. This combined with the fact that this is their last gig of the year, in the same place they played their first show makes me tingle with a sweet sadness.

I’d love someone to hum it in my ear on the long walk back.