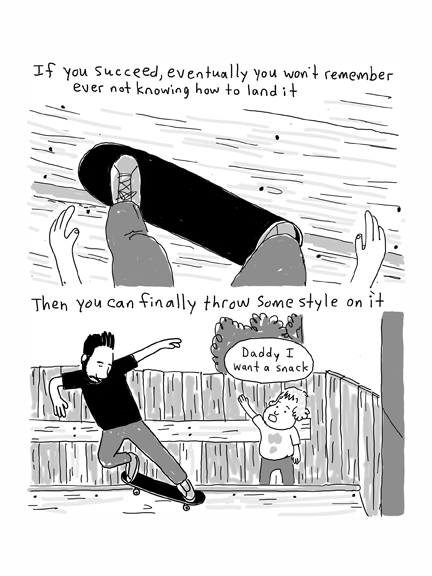 An autobiographical comic about a forty-something-year-old dad building a ramp in his backyard. Brett has stepped up from stealing from constructions sites and is now purchasing the wood. Throughout the comic, he reminisces skating on the ramp he built with his friends and hopes that one day his toddler son will want to skate. Instead his toddler son just wants to run around the ramp while being chased by a remote control car.

Brett learns new tricks, is ridiculed by his peers, gets beat to hell, and slowly watches the ramp get worn by rain. In the end, it’s all inspiring about how you’re never too old to re-pick up the board and build your dream ramp.

The artwork is super cartoony, doodle-y, and not really formatted like a traditional comic, with only two panels per page. And I absolutely dig it. Brett’s son is often the comic relief. Like most toddlers, the little one-liners that come out of his mouth are hilarious. And he’s often seen wearing only little shorts and some sort of make-shift cape. This is a short little comic that I have re-read several times and will undoubtedly let my other aging skating friends borrow. Whether they want to or not. –Rick V. (Bird Cage Bottom Books, birdcagebottomebooks.com)