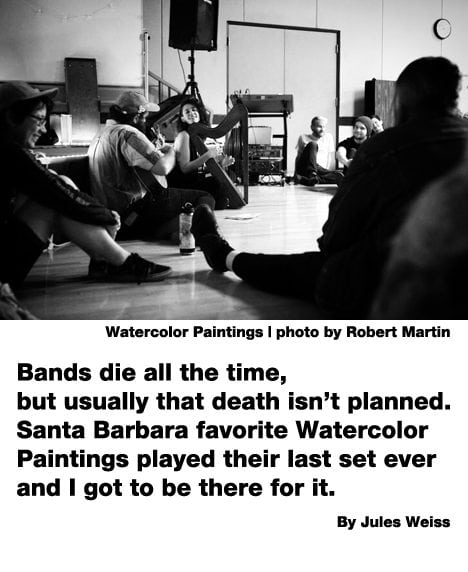 A few weeks ago, I watched a band die. It was less of a funeral and more of a celebration of life, a last hurrah. It was sitting shiva, or at least what I think sitting shiva would feel like, because it’s something I’ve never had to do before. It’s sad, certainly, and very emotional, but comforting in some strange way because at least you know the person dying isn’t alone in their final moments as a person. Their memory will continue to exist, but after this they won’t feel real anymore. A band that no longer plays exists only in memory. People will still listen to their music, but it can no longer be experienced in the same way it was experienced when you could hear it live, especially when live performances were so integral to understanding the music in the first place.

I had never heard of Watercolor Paintings before a few weeks ago. Rebecca and Josh Redman are siblings from Santa Barbara, Calif., whose parents held a b’nai mitzvah for them, since they didn’t want to pay for separate parties. I had never met either of them before their performance, but I feel like they bared their souls to a room full of people who are now deeply connected by this intensely private moment.

Corvallis DIY’s inaugural music festival, Sinking City Pop Fest, is probably something everyone in attendance will talk about for years, especially those of us who attended all the shows. The fest, which ran May 11 through May 13, featured four shows, twenty bands (some local and some visiting from other areas of the Pacific Northwest), one band from Germany, a lot of coffee, a little bit of moshing, vegetarian Mother’s Day brunch, a handful of freshly printed cassettes, and a whole bunch of new friends. It’s an experience I’m glad I didn’t miss, and the Saturday night show (which I’ve started affectionately referring to as “punk rock prom”) was the big ticket and not-so-hidden gem of the weekend.

Watercolor Paintings played last at the Saturday night show, where the audience was largely made up of community regulars and members of other bands playing that night and at other shows in the fest. Not everyone who had listened to the earlier sets stayed to the end—most folks who stayed seemed to know of the group, knew what was coming, and knew to stay. Rebecca and Josh sat on the floor, backs to the stage with their harp and ukulele, and we all snuggled together in a semicircle around them. They opened with a little bit of sibling banter (something that would continue throughout the performance) and a song I don’t know the name of, but it had an audience participation component. Rebecca sang the melody while we sang the bassline with Josh:

Not everyone stopped on Rebecca’s cue, and the room collectively collapsed into laughter and applause when it was over. It was a hauntingly beautiful way to start the evening, and a small part of something larger I’ll never be able to recreate, partially because I have dug and dug but cannot find a recording of the song on the internet. It’s something that will exist forever in my memory and in the shared experience I had that night, and something I so desperately want to share with people who weren’t there, people who I care about who I want to share such beautiful and fleeting experiences with.

The whole night was like that. There was another singalong, a few missteps and restarts, and a lot of sibling banter. Rebecca remarked that it was odd to be playing songs she wrote when she was nineteen, ten years ago or so. Lyrics and chords were forgotten and suddenly remembered. It felt more like band practice, or a private moment between the pair, than a public performance. I teared up a few times. Surprisingly, almost nobody took out phones to record. There was an understanding in the crowd, a respect for the private nature of the moment as a whole. The crowd favorite “Indiana” was played, partially because the song’s “namesake,” Corvallis DIY organizer, longtime Santa Barbara resident, and friend of the Redmans, Indiana Laub was in the room, ready to be pointed out and publicly but gently embarrassed by the experience. (The song isn’t actually named after Laub, but the reference seemed to be a reoccurring joke between Laub and the Redmans, and calling Indiana out was part of the friendly banter emblematic of the whole experience.)

At the end of the performance, after a lot of applause and probably a few tears, Rebecca and Josh made good on their promise earlier in the evening that everyone would walk out of the show with at least a CD (a copy of their 2009 album Open Your Mouth) and a 7” EP, a split with Madeline Ava. I gathered my things, said my goodbyes to folks I would see at the brunch show on Sunday morning, and biked through the cool night air of Corvallis to where my partner was coming to pick me and my bike up. I had picked up a few gifts for him at the show, but I was more excited to tell him about my experience, which I did. I cried about it a little—I had missed him, but not in a wish-you-had-been-there kind of way. It was more of a wish-we-had-shared-this-experience kind of missing someone. I gave him the CD and made him promise to listen to it sometime soon. It was the only part of the experience I could properly share with him.

I watched a band die. But I also watched something new be born, a new understanding shared between the people who were there to sit shiva and give Watercolor Paintings the send-off I can only imagine it deserved. I will undoubtedly see Rebecca Redman again, sometime soon, since she’s a member of a number of punk bands that tour with some frequency through the Pacific Northwest—SOAR, Remambran, Coherence, and doubtless more to come. I might ask her if there’s a recording of that so many lights, so many stars song in existence, and if there is, where I can find it. But I don’t think I’ll ask her if she’ll play it again, regardless of how much I want that. Watercolor Paintings is dead, and that’s okay.

Jules Weiss is new to the West Coast, new to punk, and new to writing articles for any sort of publication. They are a graduate student in Anthropology at Oregon State University doing research about transgender people involved in punk and trying to figure out exactly what’s up with that. You can find them on various places on the world wide web where they don’t keep their name private at all, or by email at [email protected].