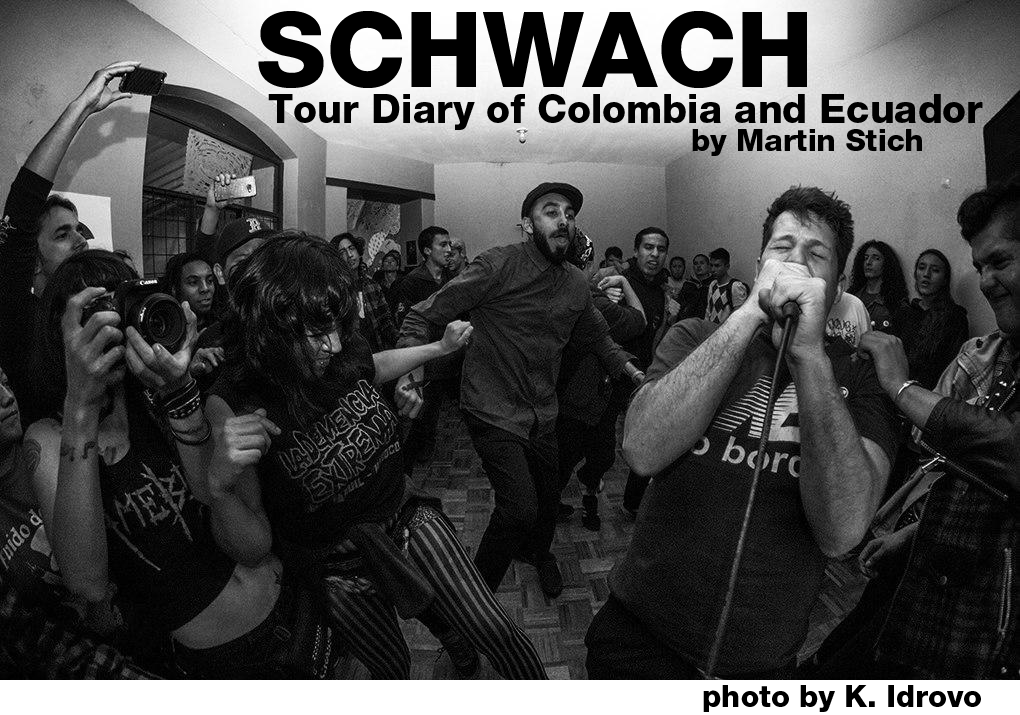 Schwach Tour Diary of Colombia and Ecuador by Martin Stich

When a friend of ours, who was traveling Europe last year, invited us to tour in Colombia, we didn’t give the proposal much credit. Many promises are made when you’re far from home and someone just gave you a couch to crash on. And, anyways, who the hell would care for a German-singing hardcore band in the tropics?

During the following months, however, we realized that our guy Fello was serious and eventually we had an entire tour booked, starting March 30 in Bogotá, where we arrive one day in advance. We’re picked up at El Dorado International Airport by local punks Camilo Amenazas and Maria-Paula who, apart from putting up shows, run a vegan burger joint in the country’s capitol. The air in Bogotá is pretty thin and after we already lost our sense of time somewhere across the Atlantic, the nocturnal ride to our sleeping place is somewhat surreal. Not the least because we’re being dropped off in the midst of what seems to be the city’s financial center: a lot of shiny glass, no buildings with less than ten floors and a doorman who lets us in so we can squeeze into an elevator that shoots us skywards.

Once welcomed by our host, we situate ourselves between cats, lentil burgers, and a bunch of Bogotanos preparing for a night out. Even though someone has made an effort running down the place, punk posters and missing toilet paper as well as soap cannot hide the fact, that this is a pretty solid apartment. Crust friends who had already toured this neck of the woods had told me about stabbings at shows and blood-splattered hostels, causing a certain paranoia about my chances of survival. Tranquillized by the thought it might not be that bad in the end, I fall asleep.

After we spend the following day looking for a place to print a tour cover for our 12”—an impossible undertaking in Catholic Colombia on what turns out to be Good Friday—we head to the venue of our first show where we also meet Ximena of the Rattrap collective who had screen-printed and sewn a bunch of shirts for us.

As with most of the events of the following two weeks, this one’s located in a private club. While those lack the fucked-up, rancid feel of the squats we’re used to, the kids that turn up usually see to the right atmosphere. There’s probably no better way of being welcomed than to see total strangers go nuts during your set. Ironically enough, it’s also here where our cultural differences become most apparent: besides the fact that punk seems to be more vibrant on this continent, it’s also more open to violence. On several occasions, half the people attending would have been kicked out of an average German punk venue before the end of the first song. This was most notable in Medellín and Cali, where we had to cut the set after a brawl broke out. (Although, that happened because our singer knocked a kid over who he thought had kicked him in the crotch.) The problem, however, was that we play a type of music many people like to go berserk to. Although, we as a band, distance ourselves from that notion and try to appeal to people who love tough music but find tough guys annoying. Which, of course, no one knew and didn’t make much sense to a scene where stomping each other’s heads in seems to be the default mode.

That is not to say that all the locals approved of violent dancing. On several occasions tensions arose within the crowds, as was the case in Quito, Ecuador where we played our last show. The whole thing this time around was somehow connected to straight edge, with edge kids being the culprits. Mistaking us for a straight edge band, we were blamed for the violence and also had to cut this set.

Apart from that incident and the band Raw Brigade from Bogotá, straight edge, for the greater part of our stay, is conspicuous mostly by its absence. Drug use, especially that of cocaine, seems to be more accepted, and in any case more affordable, than in Europe. Still, we are a little disturbed when we play in Caicedonia, a very small town next to Armenia, the capitol of Colombia’s coffee growing region. The place is easily the most beautiful we’re going to be at. After days spent in either metropolis or bus, being able to look for miles with only occasional trees blocking one’s view of some distant hills is a relief.

On our arrival in the morning we’re being offered some sort of home-brewed liquor that seems to blind everyone within smelling distance. Later we learn that the rural youths have also taken to mixing ethanol with some sort of flavored powder and drinking this blend—that actually does cause blindness—on top of all kinds of other drugs. Naturally, the kids don’t drink this crap because they want to lose their sight (at least that’s what we hope—a few individuals seem already pretty far on the path of self-destruction) but because it’s way cheaper than less poisonous alcohol. This doesn’t harm the overall vibe of the evening, though. The show is pretty cool.

The way the riches of this country are distributed within the population is, in general, very striking. I have never been to a place where the wealth in resources is so evident. And I’m only talking about what one can see with the naked eye. That is to say: food. The amount of fruit and vegetables alone growing alongside the roads is so great that it seems ridiculous anyone should go hungry or have malnutrition. Still, it looks like the average diet consists of chips and soda. At any rate, that’s what we live off most of the time, with some occasional fried nuts pepping up the menu.

While this might very well be due to the fact that we live in buses or bus stations and also don’t want to eat stuffed pork that can be purchased on every corner by the slice, we do learn that the Colombian economy is dominated by a few families with close ties to the United States. Many of the goods growing here are meant for export, which also explains why it’s virtually impossible to get a decent cup of coffee in one of the world’s top three coffee exporting countries. On top of that, Colombia’s main corporations also own a few of the more important media outlets. One day inside a taxi we listen to a report on Caracol Radio praising palm oil, that had recently been chosen to boost the Colombian GDP. Wondering how that might affect the country’s rainforests I look outside the driver’s window, just in time to catch a glimpse of a neon sign advertising a super market by the name of Caracol.

Taxi rides were part of the security protocol recommended by our respective hosts, who either accompanied us while walking around or took care that we arrived safe and sound as scheduled by promoters ever worried about us being on time. Well-advised, we mostly stay away from sketchy areas and don’t encounter any problem whatsoever. In fact, the only time our lives seem to be at risk is when we—pressured by yet another promoter and in spite of being warned against doing so—book seats in what apparently is Colombia’s most fucked up bus company, Rapido Tolima.

The bus driver does his best to live up to his company’s nickname Rapido Suicida and some forty-five minutes into the twelve-hour ride, we’re standing in the middle of nowhere with mosquitoes eating us up, while the man in charge tries to fix a broken engine with swamp water. We wait for two hours in complete darkness, with occasional trucks thundering past us until the impossible seems finally achieved: he drums everybody up, mounts his seat, puts the key in the ignition, turns it… and calls the company to send a replacement bus. After another hour we are back on the road and arrive in Medellín just in time to kill an entire day before the show starts. We’re later told that drivers aren’t paid by the hour but by accomplished rides, which changes our feelings towards that guy.

However, us being spared doesn’t mean that the region we’re traveling through can, in the narrower sense, be considered safe. For decades, part of the Colombian population engaged in a fight against big capital whose influence is increasingly limiting the access to the country’s vast resources. Confronted with governmental repressions and paramilitary violence, groups like the FARC, for their part, also took to guns which created a situation that has kept the country in gridlock for the better part of the last half century. The government’s reply to proposed peace talks in the ’90s was more violence against both rebels and the rural populace. Facing the consequent diminishing support within their base, the FARC recognized that armed struggle would be unrewarding and finally agreed to a process of “legalization”—i.e. disarmament, which includes their transformation into a political party—a procedure that is by no means uncontested as we learn on our sojourn. Right-wing activists try to prevent leftist positions from entering the legal stage of politics. This endeavor has reached another level since the election of Colombia’s now president Duque in August.

Not the least because of these dynamics there’s also discord within the FARC movement; while large parts of the former guerrilleros proceed with their rehabilitation, some refuse to give in. Deprived of both a negotiation base and legal means of income, some draw on nontaxable branches such as drug trafficking and ransom. While we’re pretending to be punk adventurers, a team of journalists from Ecuador investigating these activities is kidnapped in the Colombian-Ecuadorian border region and executed only a few days later.

The only reason we’re not in that precise area when this goes down is because we’re stuck at the border crossing with about eight hundred Venezuelans who leave the neighboring country in the thousands. Already in Bogotá, we’re surprised to hear our punk friends expressing their disdain towards a bunch of people who turn out to be Venezuelans trying to get anything in exchange for bundles of their worthless cash. While we’re waiting to pass the Ecuadorian health check (three nurses and a thermometer) we get into conversation with some of them who tell us about the $2 wages they’re turning their backs on. Afraid to already know the answer, we ask if it’s $2 an hour or a day. But it’s neither one. Not sure how anyone might live with a sum that little during a whole month, we climb into the bus that gets us to our last two shows.

Substantially smaller than its neighbor, there seems to be a lot more money in Ecuador. The bus terminal of an average city looks like a European airport—still no toilet paper though—and the overall feel is that the wealth of this country somehow trickles down easier to the average person. In any case, it had reached most of the people we stayed with.

Interestingly enough, it’s only here where we’re not getting any cash from the promoters. Anyhow, after ten shows and countless hours and miles on curvy roads without guardrails, we fly back to Berlin, reassured there are other places where punk and hardcore still have meaning.

We are called Schwach and play hardcore punk with German lyrics covering mostly leftist politics that are critical of the neo-liberal society that we find ourselves living in more and more in Europe. After having crossed the Atlantic Ocean last year to play in Colombia, we’re currently organizing a tour on the U.S. West Coast and Mexico set for July 16 through August 4.