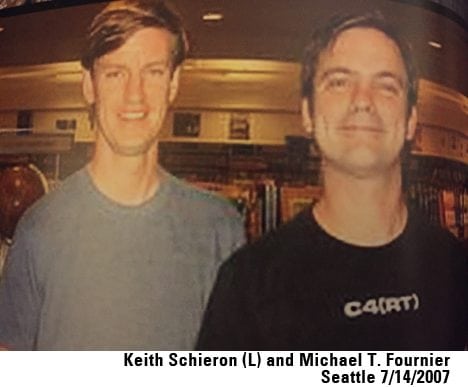 I’m saddened by the news of Keith Schieron’s passing. He died of brain cancer at the end of 2016.

Keith was half of the filmmaking team behind We Jam Econo, the documentary film about San Pedro’s Minutemen—my favorite band, the band that most inspired me, the band that propelled my career in writing.

I didn’t know him very well, but it was Keith, more than anyone, who got me started.

The Minutemen have been my favorite since I first heard them playing “Paranoid Chant” behind Jason Jessee’s halfpipe part in the old Streets of Fire Santa Cruz video. I was—and am—smitten by their chops, honesty, and sense of humor.

I spent high school lunches thereafter in the school library, ransacking drawers of microfiche in an attempt to learn everything I could about them, and pieced together something resembling a chronology: guitarist D. Boon and bassist Mike Watt growing up together, D. Boon’s tragic passing in a van accident, and the subsequent formation of fIREHOSE. And I managed to find all of the band’s records, either in my hometown of Concord, N.H. or during record shopping trips to Boston.

Years later, in 2005, I discovered the 33 1/3 series—small books, each devoted to discussion of a specific album. Great, I thought, I’ll be able to find out more about Double Nickels on the Dime, the Minutemen’s 1984 double album widely regarded as a classic. I was shocked to find that no such volume existed.

I thought maybe I could write it.

For years I’d fancied myself a writer without doing the work to earn the title. I decided to get serious in 2003 or so, first writing a (horrible) first novel draft, then some short stories, which I pitched around. I reviewed my record collection alphabetically online to get into the habit of writing to deadlines.

I had some small successes, offset by enough indifference and rejections to make me wonder when I’d get a break. Some days such a thing felt impossible.

Around the same time I heard that a Minutemen documentary would be playing at the Coolidge Corner Cinema, walking distance from my Allston apartment. By then, I had read Michael Azerrad’s fantastic Our Band Could Be Your Life, which filled in the gaps in my own research. But footage was elusive. I’d managed to find a video store in Philadelphia that rented me a copy of SST’s The Tour VHS tape in 1993, but that was it, pre-YouTube. I was too young to have seen the Minutemen play.

The documentary screening amazed me: I was in a room full of Minutemen fans for the first time, many of whom rocked vintage T-shirts and talked of the band playing the Rat, the Channel. I played Minutemen records for anyone and everyone for years, but had never met legit fans of the band until then.

Once the movie started, the audience cheered as a thirty-foot projection of D. Boon bounded around a stage.

After the film ended I bought an “econo” T-shirt from a woman at the merch table. “Thanks,” she said. “This saves us a trip to the post office.”

“My husband is one the filmmakers,” she said, pointing to a tall guy.

I introduced myself and told the guy—Keith, he said—how much I appreciated the movie, how great it was to see and hear the band’s whole story. He thanked me and talked about how much fun the process had been.

I mentioned that I’d been thinking about pitching the 33 1/3 series a book on Double Nickels.

“Great,” Keith said, “let me know if I can do anything to help. My address is on our webpage.”

Some months later, as my pitch deadline approached, I wrote Keith—I asked if he could pass along Watt’s contact info.

Another setback. More indifference. I tried not to bum too hard.

Instead, Keith forwarded my email to Watt, with the disclaimer that he had only spoken to me briefly.

And Watt wrote back.

Within a few days we agreed on a date to meet in San Pedro.

I couldn’t believe it.

I wrote and thanked Keith effusively.

I saw him again on my first book tour, in Seattle, when he came unannounced to my reading at Third Place. He congratulated me on my success. I told him I was taking another crack a writing a novel.

What I didn’t get to tell him was that the life I always envisioned—writing and travelling—opened up because of his kindness.

And that based largely on the Minutemen book, I’d get a free ride to grad school.

And that with my newly minted degree I’d cobble together enough work teaching to leave ten years of waiting tables in the rearview mirror.

And that the cool couple that would cold call to ask me to read at the 25th anniversary of Double Nickels would put out two of my novels on their press. My wife and I would tour these novels, make new friends, hang out with old ones, have adventures.

It’s a small thing, forwarding an email, but my whole life has changed as a result.

Thank you, Keith. Rest in peace.

Michael T. Fournier is the author of two novels on Three Rooms Press and a book about the Minutemen’s Double Nickels on the Dime album. In addition to Razorcake, he’s also written for Electric Literature, Chicago Review of Books, McSweeney’s Internet Concern, and Pitchfork. More at michaeltfournier.org