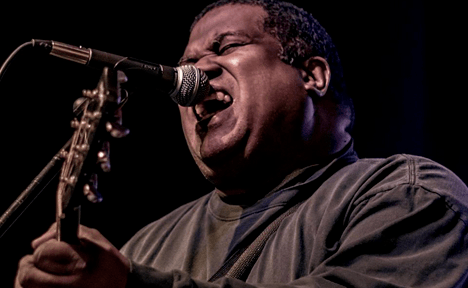 Part of The Sound Salvation series.

It is easier than ever to hear old and new bands. We can stream or download music that is quickly found through an internet search. But in the pre-internet days there were limited options for discovering new punk bands. Living in an area that had a college radio station with some kind of punk programming was certainly one great way to hear music. People might record the shows and listen all week and/or write down releases to mail order. In Chicago and some nearby cities, “Fast ‘N’ Loud” on WNUR 89.3 FM at Northwestern University was the source for punk and hardcore. The show lasted for nearly two decades and was integral to the local scene. I interviewed one of the show’s founding hosts, Rodney Anderson, to learn about the experiences of doing a show in the early 1980s when it was much harder to find punk on the radio.

Daniel: How did you get involved with Fast ‘N’ Loud?

Rodney: I was playing in a punk band (Seismic Waves) and suddenly in the summer in ’83 things exploded in the punk community. For the first time we had a punk radio show that a lot of people could hear because of NUR’s signal strength. So we rushed and got an interview as quick as we could. During the interview we talked about going to college and how we were going to make the band continue to work. Everyone said where they were going. I went last and said, Northwestern. There was dead air for a second, and when the interview was over Doug Conn (host and creator of “Fast ‘N’ Loud”) said, “I’m going home in a couple weeks and I need somebody to cover this show while I’m on vacation. Are you really enrolled?” I said, “Yep, I start in September.” I had the keys to the radio show; stumbled and bumbled my way through it. You could tell people were listening because every bad trait I had on the air would get yelled at me on stage when my band played. [Laughs] I started that summer of ‘83 and did the show until December, 1987. Shortly after I started, another buddy of Doug’s came, a guy named Mark Hejnar. The three of us did the show for a year. And they both graduated so I kept it alive.

Daniel: Can you share a bit about the context of “Fast ‘N’ Loud”: When were you on the air? How did your show fit into the station’s sound and mission more generally?

Rodney: We had a prime time radio slot that a lot of college students wanted: 7-10 PM on Saturday nights. It was 8-11 at one point, 10-12 if there was a basketball game. They always had the “Rock Show” (a block of programming that is currently on Monday-Friday in the late afternoon/early evening that focuses on indie/post-punk/alternative music, broadly speaking). We weren’t against the “Rock Show” playin’ the stuff, but we needed a separate identity.

After a couple years I felt done, but it was what I knew, it was what I was good at. It’s just that I spent more time defending the show than I worried about running it. They (station management) were always pointing a finger at the show because we were this odd thing that supposedly could do more damage than good. The show didn’t make any sense until we did our first fundraiser and pulled in—I don’t know—$600 or something during three hours on that particular night. But we did it with like two hundred phone calls. The phone never stopped ringing. These listeners wanted the show to remain around. People behind the scenes were trying to figure out what shows were worth keeping and every year we went on and did our shtick, playing songs like Fang’s “The Money Will Roll Right in.” The reaction was always great; the listeners loved us. There was no alternative.

Daniel: The show was still going when I moved here in 2005 but ended shortly after. A lot of older punks I have met here talk about the importance of “Fast ‘N’ Loud”; the show helped them hear new bands but also was an important outlet for their music to be heard. What was the reach in terms of wattage and geography?

Rodney: I am surprised the show ran for twenty nine and a half years, or somewhere in there. There was enough flow of students. The wattage was the same then as now: 7200 watts. The antenna was only about eighty feet off the ground. There are other stations on that frequency, so when you started driving along Lakeshore Drive (a mini expressway that runs along the far east side of Chicago along Lake Michigan), you couldn’t hear the station when the buildings got taller. But the bizarre thing is that the signal cut across the water like nothing, so we had listeners in Kenosha, Wisconsin and fans in Hammond, Indiana. My band was on a bill in Madison, Wisconsin with Toxic Reasons and a band from up there called Imminent Attack. When we were playing, people were singing along. That’s a little weird. We finish the set and they come running over: “You’re the guy who does the radio show.” I said: “The signal does not make it to Madison, Wisconsin. How do you know us?” They were from Kenosha. Kids got in their cars and drove eighty or ninety miles to see a punk show. It’s something I always liked about Wisconsin; they supported bands. Any event was a big event. In Chicago people won’t go across the street; there’s just too much of everything here.

One thing that I always had fun with is that people knew what I sounded like but not what I looked like. It was good because you could do your job, leave the station, and nobody could pick you out. Somebody called once and said he saw me at a show. I asked, “Yeah, what was I wearing?” And he said I was six feet tall, blonde, with a mohawk. Leather jacket. “What was on the back?” He names a band. “Yep, next time I’ll buy you a beer.”

Daniel: He had no idea that you are African American. [Laughs] He thought he was able to link your voice to some other punk, but did you have situations where people could identify you because of your voice?

Rodney: One time I was working in a lab at For Eyes Optical, talking to the lab tech. There were two eight-year-old boys and a father. The father says: “My son says you do a radio show.” He picked my voice out of the air just walking through. “Yeah, it’s a punk rock show. Songs are basically anti-parental and hating the government, but it all goes over their heads.” [Laughs] And they walk off. The lens secretary goes: “Why would you say that?!” And I told her: “Well, for the first time in a long time, he’ll sit down with his kids and see what they’re doing.” They’re not going to turn into axe murderers. There’s this stigma that punks are fuckups.

Daniel: Let’s talk a little bit about The Middle of America Compilation that came out in 1984. That comp certainly helped expand the show’s influence beyond an immediate listening range.

Rodney: Doug got the idea of making the compilation. He presented it to NUR and they shot him down one hundred percent. Doug is a very enterprising person and he got a group of friends, who all pitched in, and put it out. Everybody thinks it’s an NUR compilation because on the cover it says “Fast ‘N’ Loud Presents.” He might have put NUR on their somewhere. (WNUR is listed on the back of the album jacket.) But he wasn’t very happy that he had to do it himself even though he was totally capable and got it done. I wasn’t involved: I didn’t put in any money, help with the production, and my band was too lazy to get our shit together to put a song on it. It was critically acclaimed and after that NUR started doing compilations all through the “Rock Show.” Fairly cool stuff would show up on those comps but we were laughing because we had to earn it.

Daniel: How were you getting records during those early days? I think there’s a false sense that punk bands were constantly on the road at that time, but really that only applies to bigger bands. Local bands would mostly play local or regional shows.

Rodney: We did get stuff in the mail. And we had one sponsor, Wax Trax (a record store that started in Denver but moved to Chicago and later became a label). In exchange for saying that “a portion of the show was donated by…” we could go there once a week and pick up twelve dollars worth of stuff. We’d grab a lot of 7”s because you could get more than LPs. We’d go down there and pick out stuff and add it to the rotation.

The compilations were a great way to get international bands. Any national touring bands would bring their records. But we were also local, and local needed our support. That’s what keeps everything going. It took me a couple years to realize—there was some band I didn’t want to play on the air—but at that point I decided as long as it was punk I would play it. Somebody somewhere may dig this. If the mic was off, I might not like a band, but what I would say when the mic was on was different: it’s not fair to somebody to have some music critic, or some nobody who doesn’t know anything shit on you. People travel a long way to give you their cassette.

Daniel: Can you talk a little bit about the sound of the show and how you coordinated with the other hosts?

Rodney: During the days when it was Doug, Mark, and me, one of us was on the air and then we usually trash talked each other. [Laughs] But it was cool because Doug would play a lot of British, Mark was East Coast, and I was very local. And then stuff from California got played. But the running theme was that “Fast ‘N’ Loud” was always educational. You could get Suicidal Tendencies “Institutionalized” or “Holiday in Cambodia” anywhere. When you come here once a week, we want you to go: “Who was that?” And then you could go out and buy it. What good am I if I just play “No Feelings” by the Sex Pistols? We want you to hear everything. A lot of the obvious stuff that you already had, that was probably sitting on your turntable, when you’d call the station to request it… that doesn’t accomplish anything. Time is precious.

I don’t know what happened during the later years but for us it was a newborn and you had to nurture it. And, again, we were on during a prime time. I always thought that the first ten minutes was always fun. Sometimes we’d follow a basketball game and I would always say: “Either turn up or turn down your radio because it’s ‘Fast ‘N’ Loud.’” I would make a point to run the most sonically shredding, hard stuff for the first ten minutes. I wanted to make sure I purged anybody who just happened to casually leave the radio on. You will be challenged.