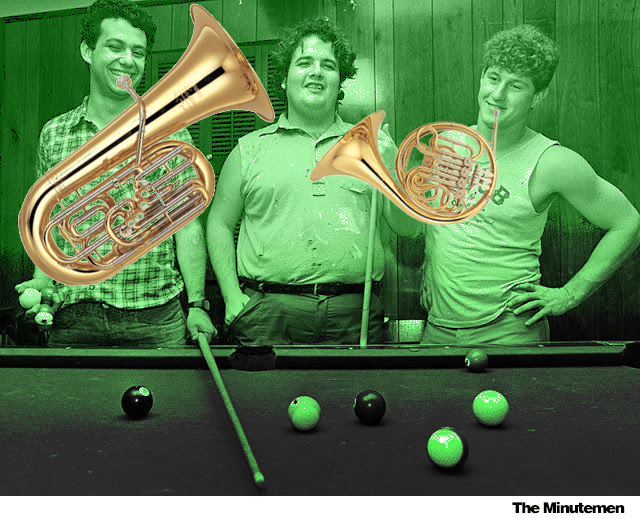 Razorcake Podcast #781 with When Horns Are Okay 13, Stations of the Brass with Ethan and Todd

Welcome to When Horns Are Okay 13. Aww, shit. We just dived down a series of rabbit holes and you’re stuck with us dum-dums for, at bare minimum, another six horn-honking episodes. We did some behind-the-scenes cleanup and organizing prior to recording this episode after being in the following scenario too many times:
“Hey Ethan/Todd, have we played _________ or is that something that’s logged in but we haven’t played yet?”
Answer: “I don’t know.”
We’ve now collected, cataloged, and Excel-nerded over 320 horn songs by over 300 different artists… and counting. Be warned. We’ve tightened the valves on this tootin’ podcast, cleaned our spit valves, and are lookin’ with crossed eyes to the future. There’s no quick end in sight.

This was just pure laziness on Todd’s behalf. The Minutemen song “King of the Hill,” is from Project: Mersh. In Watt-lingo, the title is The Minutemen’s stab at making a commercial album. It wasn’t.

John Lennon (Plastic Ono Band) and GG Allin & The Jabbers are one step away from one another. The connective tissue is David Peel, Apple Records, and Orange Records.

Todd briefly mentioned the Pope did worse things than smoke dope, and said the Pope (and by extension the Catholic Church) was responsible for the killing of children. This is what he’s referring to.

Alison Mosshart is not in The Killers, but The Kills. She was definitely in Discount, who Todd really liked and interviewed in the late ’90s. As Ethan mentions, The Killers in contemporary times are a rock band from Vegas. There is no overlap to the British band.

The Compulsive Gamblers actually do predate The Oblivians in Greg Cartwright’s musical timeline.

There is no YouTube channel of Razorcake podcasts. Todd was just fibbing.

CALLS TO ACTION!
If anyone has some suggestions for some rippin’ punk from Macedonia that isn’t Xaxaxa and Bernays Propaganda, please let us know.

If you have any punk horn suggestions, please send your recommendations.
(Please note we’ve already played The Saints, X-Ray Spex, Rocket From The Crypt, and are aware of Fear’s “New York’s Alright.” Songs played in previous horns podcasts: https://razorcake.org/?s=horns)

As of today, we haven’t come across a Crass song with a horn in it (see title of this podcast.) If you know of one, or have access to audio equipment and can add a horn to your favorite Crass track, please get in touch.
https://razorcake.org/contact/