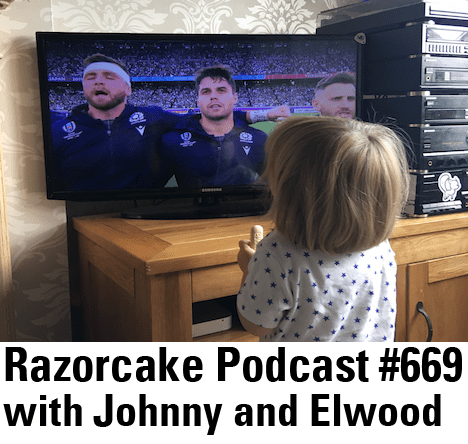 Razorcake Podcast #669 with Johnny and Elwood

Razorcake Podcast #669 with Johnny and Elwood

I’m going to talk about something really unpunk for this intro: national anthems. I really love watching rugby (again quite unpunk) and my favorite competition is the six nations where teams from nations in Europe compete. Every match is preceded by the singing of the two teams national anthems (except Ireland who have a special anthem due to the team being made up of republic and northern Irish players). One anthem really stands out everytime I hear it and stays in my head for hours after the match and that is “Flower of Scotland.”

If an anthem is supposed to symbolize a nation then it seems that this maybe the perfect anthem for Scotland. It tells the tale of the Scottish under Robert The Bruce defeating Edward The Second at the Battle of Bannockburn. It speaks of the fierce independent pride that still runs through the Scottish. Its melody sounds Scottish and it gets the blood pumping before the match begins. It’s undoubtedly more inspiring than imploring a deity to look after the symbolic head of an outdated mode of rule.

But it also speaks of the fact that taking to the battlefield is something that must remain as a part of the past and bloodshed should not be a part of the future. That the English and Scottish can live and thrive together and that there are different ways to retain your independence. There can be pride in our past without necessarily having to repeat it. It’s a damn fine song and so are the ones you’re going to hear in this podcast.