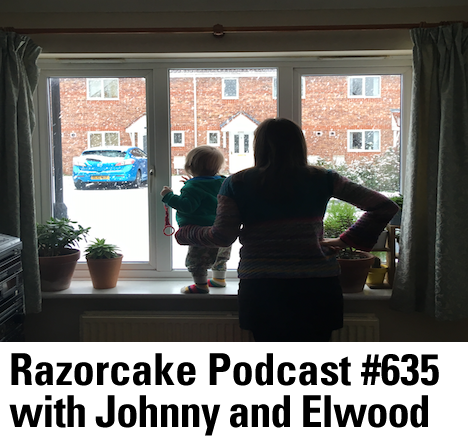 Razorcake Podcast #635 with Johnny and Elwood

Razorcake Podcast #635 with Johnny and Elwood

Ten years ago I moved from my small hometown to Yorkshire. More specially Leeds and then York. In that decade I’ve gained a degree, got married, and started a family. As well as watching my share of bands live, and buying more records, t-shirts and other band paraphernalia than was healthy. I’ve come to know this county as my home and it’s seeping into my identity. For Elwood it may have an even more profound affect on who he is.

I arrived in Leeds at a time when the music scene seemed to be exploding with creativity. Young bands were playing in fantastic venues and I was lucky to see so many varied line-ups that didn’t make so much sense but that was the joy of it. The Brudenell Social Club remains (in my opinion) the greatest music venue in the world and the Live At Leeds festival (not to be confused with Leeds Festival) is a fantastic inner city festival that a glance at the latest line up shows a festival with a large percentage of women and people of colour.

When I moved to York I found a city with a much smaller, but equally dedicated music scene. The LGBTQ positive Hot Crush nights introduced me to a queercore scene that harboured some fantastic bands and a really welcoming community. York is also a beautiful city that has retained so much of its history.

So Elwood and I provide to you a glimpse into some of the music of Yorkshire from the past decade. Or as Castrovalva put it “Come up to Leeds and check out our shit band!”

And a little bonus tidbit for you. The county of Rutland is the smallest county in the U.K. for half the year, for the other half it’s the Isle of Wight. This is down to whether the tide is high or low on the Isle of Wight.