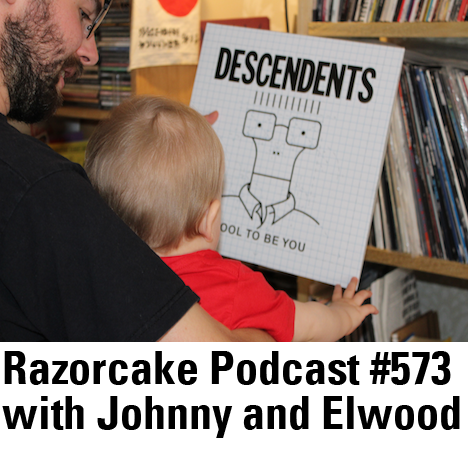 Razorcake Podcast #573 with Johnny and Elwood

Razorcake Podcast #573 with Johnny and Elwood

Can a genre of music make you a better person? I think punk can. Through this music and the culture that surrounds it I became more socially aware, I changed the way I eat and the way I think about how I consume. I grew up in a pretty conservative town and was lucky that my dad, upon hearing me playing Green Day, handed me a Clash CD because he thought I might enjoy it. I may have turned out very different if it hadn’t been for that moment. So in this podcast I’m going to start my son listening to punk early, 9 months old early, and hopefully he’ll turn out an even better person.

Tracklisting:
Kinky, “Legal Fucking Murder” - Sissy Mosh (Self released)
Shit Present, “The Line” - Misery + Present (Specialist Subject)
- - -
The Smith Street Band, “Suffer” - More Scared of You than You are of Me (Side One Dummy)
Post War Glamour Girls, “Jazz Funerals” - Pink Fur (Hide And Seek)
Future of the Left, “Beneath the Waves an Ocean” - The Plot Against Common Sense (Xtra Mile)
Jeff Rosenstock, “To Be A Ghost” - Worry (Side One Dummy)
Kepi Ghoulie, “The Beast With Five Hands” - Kepi for Kids (Fun Fun Records)
- - -
Colour Me Wednesday, “Queer for the Summer” - Queer for the Summer (Self released)
Self Defense Family, “Have You Considered Punk Music?” - Have You Considered Punk Music? (Run For cover)
Petrol Girls, “Restless” - Self-titled EP (Self released)
The Creeps, “Car Crash” - Art Of The Underground Single Series (Art Of The Underground)
Moody Gowns, “Step Mother” - Moody Gowns/Bearfoot Beware Split (Self released)
- - -
Kimya Dawson, “At the Seams” - At the Seams (Self released)