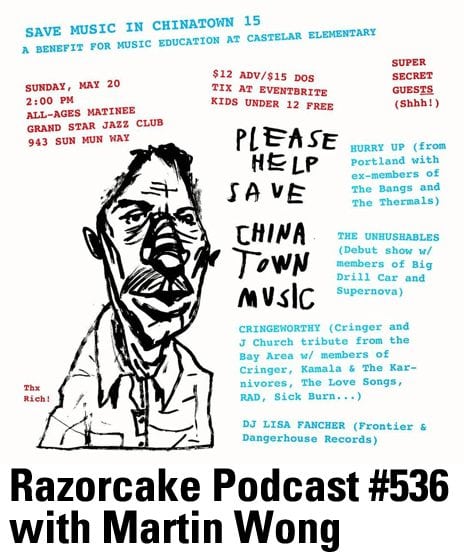 Razorcake Podcast #536 with Martin Wong of Save Music In Chinatown

Razorcake Podcast #536 with Martin Wong of Save Music In Chinatown

Who knew that the Save Music In Chinatown all-ages benefit matinee fund raisers for the music program at Castelar Elementary would last longer than the actual punk rock shows at the neighborhood’s old Hong Kong Cafe? First-wave punk bands like Black Flag, Germs, Go-Go’s, Dils, X, and Bags played in Chinatown from 1979-1981, and now survivors of the scene and their musical progeny are back with little kids dancing in front and cookies and coffee at the bake sale. Looking ahead to the fourteenth show in the project’s fifth year, we talk to the its main toiler Martin Wong (ex-Giant Robot magazine) about the cause and play music from the upcoming show (Hurry Up, The Unhushables) as well as bands who have played in previous lineups (Alice Bag, The Crowd, Ford Madox Ford). Take a listen!

Stay up to date here:
facebook.com/SaveMusicInChinatown