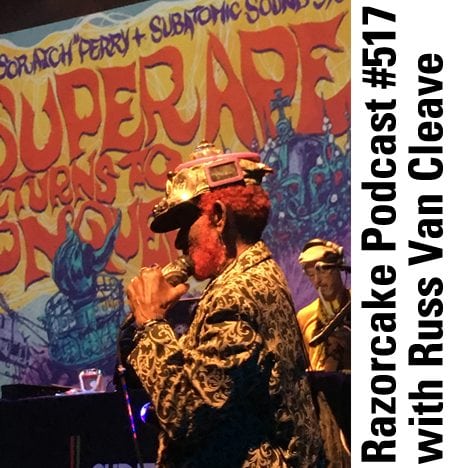 One of these days, I'm gonna get it together and do another one of these that's a little more thematic. Not this time though. This is merely another amalgam of random tunes that occasionally attempt to draw some vague connection between one song and the next through nothing, if not my best attempts at establishing a sequence. Nonetheless, I stand by whatever we have here.

Tracklisting:
Future Virgins, “Darkness” from Late Republic (Recess)
- - -
Panthro UK United 13, “Goleta” from Goleta (No Idea)
Old Vices, “Gave 'Em Hell Today” from Old Vices (None)
The Nips, “So Pissed Off” from The Tits Of Soho (Bovver Boot Co.)
- - -
The Wedding Present, “Once More” from Tommy (Re Sept Shun)
NRBQ, “I Want You Bad” from At Yankee Stadium (Planet Closest To The Sun)
Hot New Mexicans, “I Made The Doubt” from Self-titled (Recess)
- - -
Lee “King” Perry, “People Funny Boy” from Some of the Best (Hart Beet)
Fugazi, “Shut The Door” from Repeater (Dischord)
Bad Brains, “The Big Takeover” from Attitude: The ROIR Sessions (ROIR)
- - -
Scream, “Came Without Warning” from Still Screaming (Dischord)
Swing Ding Amigos, “Undercover Nugger” from Kings Of Culo (Recess)
Midnight Oil, “Back On The Borderline” from Head Injuries (Sooo Knee)
- - -
Sloppy Seconds, “Mighty Heroes” from Knock Yer Block Off (Orange Drink!)
Butthole Surfers, “Creep In The Cellar” from Rembrandt Pussyhorse (Feel and Leave)
Unfun, “Girl Who Lives On Heaven Hill” from Something To Du (Dead Broke / Drunken Sailor)
- - -
Mountain Goats, “The Best Ever Death Metal Band in Denton” from All Hail West Texas (Murge)

Future Virgins: I hope all y'all are as excited about a new Future Virgins album as I am! If you're not, hopefully this song will help to change that. One of the greatest bands around should have a new album out by the time this podcast gets posted.

Panthro UK United 13: Alex has a distinctive voice. Some of you might recognize it from the Don's Ex-Girlfriend song I played on my last podcast. For a period of time in the late ‘90s/early ‘00s, this band was one of the best bands in Gainesville, FL. Given the company they kept in that city at that time, that's really saying something.

Old Vices: These guys are composed of essential Tampa folk. They're some of my favorite folk. Period. Jeff and Phil played in the Dukes of Hillsborough. Dan Padilla is Dan Padilla. In this podcaster's humble opinion, this song is fantastic.

The Nips: Fuck all that, a theme song for nihilists everywhere. I bought this LP at Amoeba almost 20 years ago and it still sounds like a choir of angels to me. For the uninitiated among us, that there is a young Shane McGowan on the lead vox.

The Wedding Present: I've been, more or less, obsessed with Peter Solowka's six-string wailings lately. Don't get me wrong, this song is absolutely fantastic. But, damn...listen to that dude hammer away on those strings.

NRBQ: This band gets very little credit and I still don't understand why. They've been around since 1966 and they've released over 20 albums in that time. That's insane, especially for a band that is not a household name. They write fantastic songs. They're amazing musicians. Pete Donnelley from The Figgs even played with them for awhile. They recorded an album with Carl Perkins. So, get your shit together, America, and listen to NRBQ

Hot New Mexicans: Speaking of outright fantastic bands that don't get enough credit...here we are with one of my favorite songs of the past ten years or so. In the wake of the absolutely brilliant, “It's Called Leaning Back” (along with a couple seven inches), this band put out a self-titled record that, in my mind, proves that the brilliance of their previous work weren't no fluke. If only there were more of these wonderful sonic gestures.

Lee “King” Perry: I just saw this guy in concert. That's not a joke (see pic for proof). It was something else and I had to do it because, when....when, WHEN, will I ever see a living legend of classic Jamaican music of this stature again? I won't. This is one of his first songs. It was written as a gesture of insult towards his former label owner. Note the crying baby sample was meant to make a point on his feelings regarding his former business colleague (in case you couldn't tell). It's hard to overstate the influence that Lee Perry and the whole of the ‘70s Jamaican music scene had on punk rock. His influence on music, regardless of genre is also undeniable. His philosophy on the recording process has had immeasurable influence. I think this quote from the man himself goes a long way towards explaining how that impact came to be:

With respect to his influence on punk rock, I think it is pretty evident in music from bands like The Clash, Op Ivy,etc., but there is also a subtle influence that crept into the work of bands like Lungfish and...

Fugazi: I have never played a Fugazi song on my podcast. This is odd due to the fact that I've been listening to them forever. I can't honestly rank them among my “top, top favorite” bands, but I own nearly ever record they've ever made, I consider Repeater to be an absolute masterpiece and I've spent innumerable hours listening to them out of them for years, so it would probably be an understatement to say “I enjoy their music”. I picked this song especially for the muted approach on display here. The style and the trance-like rhythmic delivery imply a heavy reggae influence, at least in my ears anyway.

Bad Brains: Just to keep it DC for awhile, here's some Bad Brains. What's really funny is that these guys, (who ended up going full Rastafari) knew nothing of reggae music until they heard The Clash. They're badass musicians. They started out as a jazz-fusion band! And then they heard the Ramones, which brought them around to punk rock and The Clash.

Scream: More DC? Why not? I've been listening to first Scream record a lot. But aside from the fact that it's a good record, I couldn't tell you exactly why. It's just been among the heavy rotation jams for me lately. Enjoy!

Swing Ding Amigos: One of the great benefits of living in the 21st century is enjoying an existence that is concurrent with the existence of this record. That is not hyperbole. These guys are/were/should continue to be....absolutely brilliant.

Midnight Oil: Yea...this has been a long road for me. I remember when my bed was burning oh so many years ago. I picked up Head Injuries mostly because some old weirdo named Scott loves Midnight Oil, but I'm now convinced that he might be onto something. This album is fantastic and this song is one of the best tracks on this spin.

Sloppy Seconds: This band gets too little credit for being an absolutely awesome band and I think this song is a bona-fide pop punk masterpiece. Also, note that brillinat transition between the talking and the music. That's right. I am a professional.

Butthole Surfers: I just picked this up on vinyl a couple weeks. So weird. So awesome. My favorite part is the violin. They didn't even play it! It was a leftover track from a country band that had recorded on the tape for the previous session. But since it was backwards and weird sounding, they decided it fit in well with the song and decided to keep it.

Mountain Goats: This song strikes a particularly strong chord with me, as I'm sure it does with anyone who has ever been bullied into believing that it is OK to have your dreams and ambitions mocked by people who don't share your vision. The world may be full of assholes who will tell you, “you suck”, or “you're a loser”, but it doesn't mean they're right.