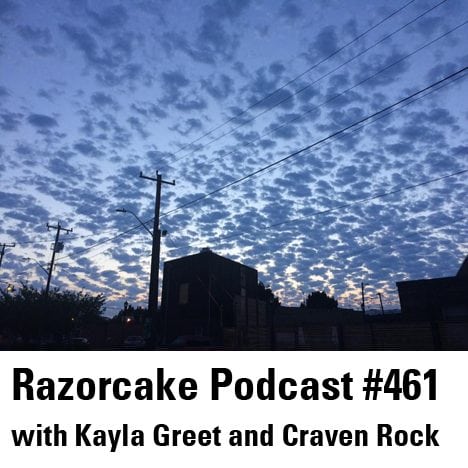 Long before I started writing for Razorcake, and right about the time that Craven Rock began doing so, we became friends and later roommates. The contributors for this fanzine are so incredibly spread out across the world, that lest you are in a major metropolitan city, chances are you might be the only Razorcaker around. And that’s unfortunate because every contributor I’ve had the pleasure of interacting with are wonderful people. So since Craven and I both live in Seattle, we thought it might be a good idea to take advantage of our luck and join forces for this podcast.

Our themes combined are basically “Things that make us angry.”
For myself I’m irrationally fired up about my quaint, “just outside the city” neighborhood getting gentrified. They’re knocking down homes where artists and musicians once lived and forcing the creative diaspora further south where things are still moderately affordable. On my block alone there are six construction sites for bougey condos (with at least six units per site) that are priced around half a million each.

As I walked home from my local arcade last week, I was at a loss to reason what the appeal of this neighborhood is for the upper class. To my back was four million dollars worth of condos, while in front of me sat a disembodied rat carcass, Harbor Freight Tools, and the Shell station which is frequented by some ne’er-do-well characters. Mind you this is the same neighborhood where people look you in the eye and smile a hello as you pass them on the street. Just yesterday I took my headphones out of my ears on my walk home to hear a neighbor recount an impromptu block party they had at Oxbow Park (look it up- giant cowboy hat and boots!) because it was nice outside. People look out for each other here. But if you’re a renter like myself, your comfort is at risk. Thanks to all these yuppie fucks my rent is going up $250 in a couple of months and I’ll have to figure out the next affordable neighborhood before it’s gentrified.

Craven on the other hand is still trying to swallow the bitter pill that is this administration. He and I live in the Pacific Northwest which is extremely liberal, but not completely. In late May there was a situation in Portland where a few men on the MAX (public transportation train) stood up to stop a man from harassing two teenage Muslim girls. The man responded by stabbing two of the three to death in public, and leaving the third in critical condition. As someone who constantly speaks up for people who are getting fucked with in public, it makes me fucking sick and scared to hear about things like this. And it’s extremely heartbreaking that this type of behavior is directly connected to the political climate of this country. I can’t even understand where this country is going, but it’s certainly a ride I want to get off of. Craven can express himself best in his own words which are on the podcast, but since I’m writing the intro, I figured I’d shoehorn a few of my feelings in here as well.