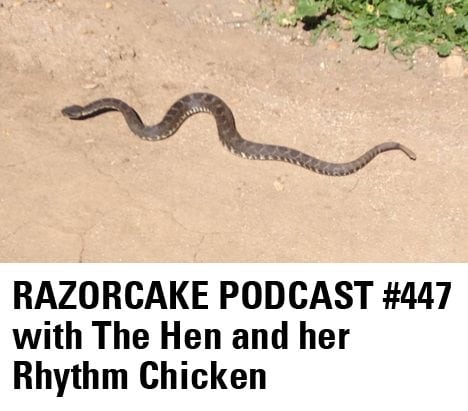 Razorcake Podcast #447 with The Hen and her Rhythm Chicken

Razorcake Podcast #447 with The Hen and her Rhythm Chicken

So we landed at the Bob Hope Airport in Burbank, Calif. where we were amazed to see a baggage claim carousel outdoors in the California sun. Having driven for five hours through a blizzard to fly out of Milwaukee, this seemed like a great introduction to early March in Southern California. A few hours later, we were hiking in the hills near the Griffith Observatory where we happened upon a three or four foot long rattlesnake crossing our path. Another few hours later we were gawking at modern art in the new Broad Museum next to the Disney Center. Wisconsin was a world away.

A few days later, we woke up after an evening of Rhythm Chili and Ohana Brewing Pacific Ale to limp into the podcast station and pop open a bottle of bubbly. My Hen shared five songs from her youth, growing up in Poland. I shared nine songs from my beloved home state of Wisconsin. Clucking was clucked. Bubbly was gulped. Todd was the glue keeping the Wisconsinites on task. In the end, we tacked on one last song from Maanam, one of our Polish favorites. After completing this podcast we relaxed while watching David Lynch’s Eraserhead. Now, that is how you end a Sunday in Los Angeles.