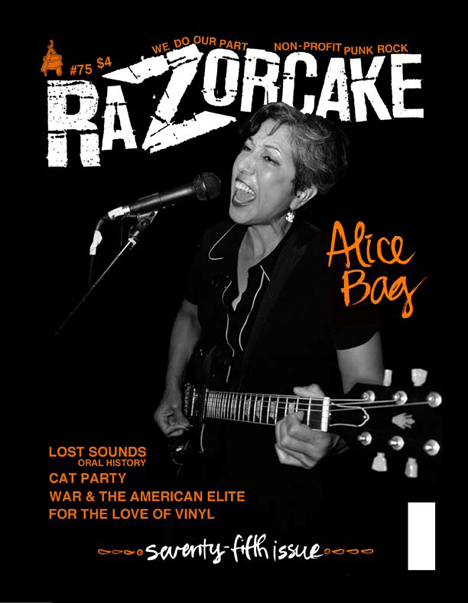 Razorcake Issue #75 from 2013 with Alice Bag, Lost Sounds, Cat Party, War & The American Elite, For the Love of Vinyl

Alice Bag: Nardwuar video interviews Alice Bag about her band, her life, and her incredible book Violence Girl: East L.A. Rage to Hollywood Stage, A Chicana Punk Story. If you’re unfamiliar with Alice Bag, she was the lead singer of seminal L.A. punk band The Bags as seen in The Decline. Read about her turning down Oprah for dinner, fisty-cuffs with Tom Waits, and refusing to get a Germs burn from a tenacious Darby. The interview ends with a recipe for chocolate chip cookies. What more do you want people?

Lost Sounds: Ryan Leach gets intimate with the living ex-members of Lost Sounds. The Memphis garage rock band formed in 1999 with Alicja Trout, Jay Reatard, and Rich Cook. They put out four reckless albums before disbanding in 2005. Ryan facilitates an oral history of the band by interviewing Alicja Trout, Rich Cook, Ryan Rousseau, Federico Zanutto (Solid Sex Lovie Doll Records), Meghan Smith (worked at Empty Records), and Larry Hardy (owner of In The Red Records). With an amazing amount of detail and the right about of giggles, the interviewees provide a comprehensive history of the Lost Sounds. Nothing about this interview is boring. Stay sober, you’ll want to remember this one.

Cat Party: Jenny Angelillo (Neighborhood Brats) interviews Cat Party. Despite their silly name, Cat Party churn out some dark butter jams. If this interview tells you anything about this band’s personality, it’s that these guys are hilarious. And they say “shit” a lot. Jenny gets some good one-liners out of them. Here’s my favorite: “I’d eat the fuck out of pizza.” Try not to smile.

War and the American Elite by Chris Pepus.  Chris attacks the American elite and their justifications for war. Framing the conversation with a critical look at how most leading journalists are alumni of prestigious private colleges and universities, he dismantles the rhetoric and illusions behind the Iraq war. A compelling and well-researched read.

For the Love of Vinyl by Todd Taylor. The Todder explains vinyl to you like you’re on the Magic School Bus. He walks you through the history of vinyl from its invention by Waldo Lonsbury Semon (real name!) to how best to store and treat your records. Have you ever wondered that thing you stick in the center of a big-hole 7” is called and why it was ever necessary? Have you wondered why records are black? Have a warped record? Want to fix it? Read this and you’ll have all the answers. But seriously, the guy who invented vinyl was called Semon.

Sean Carswell doesn’t have to wake up if somebody is crying in his house.

Jim Ruland offers a guide to surviving the Great Indoors.

Liz Prince is over the hill and under the covers.

Mitch Clem is getting fat and turning to adderall for fun.

Designated Dale remembers the late Jeff Hanneman of Slayer. There will be burritos.

Rev. Nørb gets the shit kicked out of him.

Kiyoshi Nakazawa wants to get a tattoo or skin suit.

This is our 75th issue. That’s a lot of work that got done on time and consistently so. In between our lunch time pie eating contests and summer underwear parties we take the lamps off our heads do what we love the most: make zines. It’s hard work and we’re proud of it. Thank you for your continued support. You goobers are all right.

This issue is dedicated to the loving memory of Hector M. Gomez