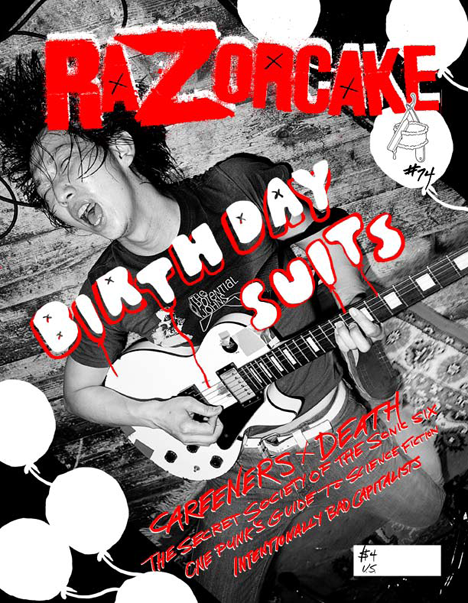 Razorcake Issue #74 from 2013 with Birthday Suits, Careeners, The Secret Society Of The Sonic Six, Death, One Punk’s Guide to Science Fiction, An Intentionally Bad Capitalist’s Take on the Internet

Birthday Suits: Todd Taylor interviews the two fully clothed men responsible for the Birthday Suits. Matthew talks about his early dreams of leaving Japan to talk rock with Steven Tyler stateside. Hideo laughs at stupid, loud Americans and loves them nonetheless. One makes sushi in the Twin Cities and they both drink too much to remember why they do what they do. All I know is how fracking awesome what they do is. If you ever get a chance to see these dudes live: do yourself the favor.

Careeners: For those of you not in the know, Careeners is the new name of the Grabass Charlestons. Grabass’s new record, Dale and the Careeners, is a masterpiece. Travis Fristoe has a one-on-one with Will about lyrics, restaurant vs. restaurant battle of the bands, and depression. Everything about this interview is insightful and hilarious. Well, except what’s not. Enjoy!

The Secret Society of the Sonic Six: Matt Average gets intimate with S.S.S.S. These local, sharply dressed Los Angeles weirdos play dark, minimal, synth-based music and make a lot of sexual analogies. They discuss the power of subtlety and people’s addiction to TV trauma. This is a goodly strange one. I suggest you tie your shoes before climbing into this.

One Punk’s Guide to Science Fiction by Katie Dunne. Katie provides some literary scaffolding to the science fiction genre. She links the genre to punk via its connection to fanzines, elucidating their origins in the ‘30s, and maps them out to the present day. The best way to learn about something is to have someone who loves it explain it to you. And how often do you get to read articles with Suggested Reading lists?

An Intentionally Bad Capitalist’s Take on the Internet (An Absorption of Robert W. McChesney’s book Digital Disconnect, 2013) by Todd Taylor. Sometimes paranoia is a justified and necessary emotion. It grows increasingly difficult every year to be a human unencumbered by technology. There’s nothing inherently wrong with innovation and efficient tools, but there is something disconcerting about their ability to isolate and control our lives. Todd reflects on the incestuous relationship between the internet and capitalism. Don’t read this on the internet you fools!

Jim Ruland goes fishing to a soundtrack of Bob Seger’s “Night Moves,” buys a twenty dollar omelet, and remembers being a sailor.

Liz Prince is having trouble admitting how lonely she really is.

Mitch Clem is clearly too old to still be playing drinking games . . . things get weird.

Rev. Nørb is in the market for a new CD player and refuses to listen to his Rancid promo CD on his laptop.

Adrian Chi gets existential and discusses epistemology with dogs.

Rhythm Chicken sits on Santa’s lap and gets a present full of ruckus.

Kiyoshi Nakazawa discusses his blooming sexuality in the springtime.

Art Fuentes goes thumb-deep into the high art of painting.

Gary Hornberger is on the move and settles in the antique mall of California.

And rad photos from:

Life isn’t always about fruit pies and dandelions. Sometimes it’s about work. We work hard here at Razorcake. Each issue is full of better-than-boring record, zine, and book reviews. They’re worth checking out. So, get your grubby sourpuss out of that pie and learn something new. Or at least laugh at something new. Reruns are for posers.

This issue is dedicated to the marriage of Alex Barrett and Lisa Tucker.