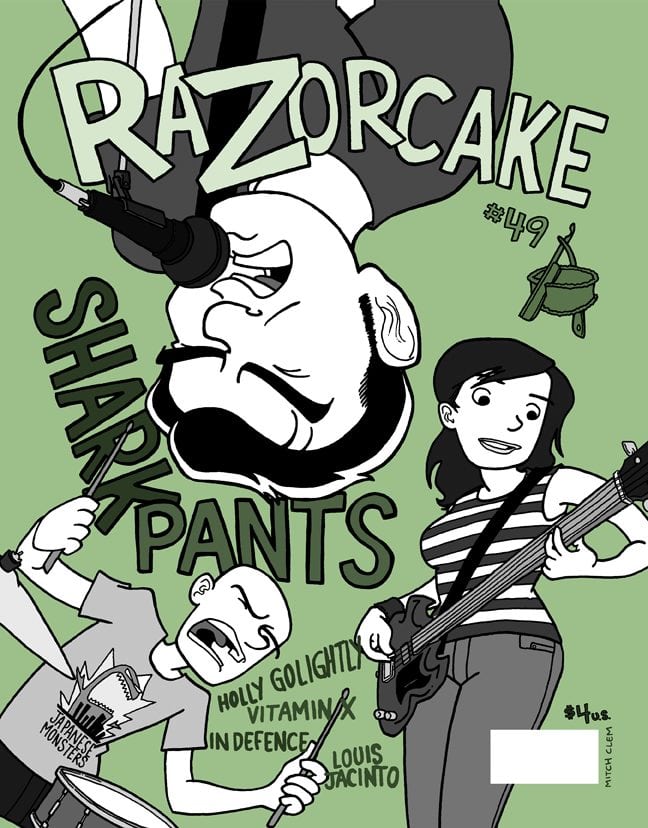 Shark Pants: Interview by Todd Taylor. Southwest fastcore that gets so crazy at times you won’t be able to tell if it’s the heat or if you’re fucked up. (http://www.myspace.com/sharkpants/)

Racking the Slide: Fiction by Ernst Schoen-René. It’s the farthest places from the big cities where the weirdest stuff happens.

Louis Jacinto: Interview by Ryan Leach. An interesting conversation with the prolific photographer of classic punk bands. (What? Let’s see you come up with a fuckin’ pictures joke.) (www.onodream.com)

In Defence: Interview by MP Johnson. Ripping hardcore from Minneapolis that covers the important issues. Are tacos better than pizza? (http://www.myspace.com/indefence)

Liz O can’t get no satisfaction.

Maddy Tight Pants seems to know a lot of facts about secret societies.

Rev. Nørb is fighting his own war.

The Rhythm Chicken sets up a new nest over in Vegas.

Designated Dale loves a parade, hates everyone else.

Art Fuentes has a razor face.

Sean Carswell reminds you to lay off the clams.

And a shit ton of reviews. Only a few for Civil War this time.