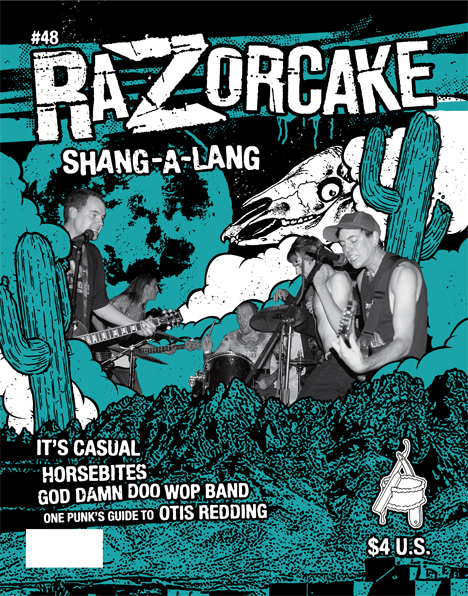 Shang-A-Lang: Interview by Daryl Gussin. Imagine if Bloodbath And Beyond and the Postal Service crossed paths in the desert, and became a catchy, lo-fi, super DIY poppy punk band. Seriously, just imagine it.

It’s Casual: Interview by Matt Average and Donofthedead. They may be casual, but these guys treat metal with the utmost formality. (www.myspace.com/itscasual)

Horsebites: Interview by Reyan Ali. You’ve seen his artwork with bands like New Mexican Disaster Squad, as well as The Fest. Now read the rest of Richard Minino’s story.

One Punk’s Guide to Otis Redding: By Todd Taylor. This ain’t no trick, it’s a treat.

Obituary for Jamie Ewing: Some close friends share memories of someone who’s touched us all.

Liz O would probably write more if she didn’t eat so much at Thanksgiving.

Maddy Tight Pants keeps her clothes on and talks about books.

Ben Snakepit isn’t the only one who takes Danzig seriously.

Sean Carswell, a priest, and a rabbi all walk into a bar.

The Rhythm Chicken gets drunk AND political.

Kiyoshi Nakazawa reminds us that everyone poops—their pants.

Nardwuar interviews the Rhythm—um, make that the San Diego Chicken.

And like always, a couple hundred reviews, all of which for D4’s Civil War.