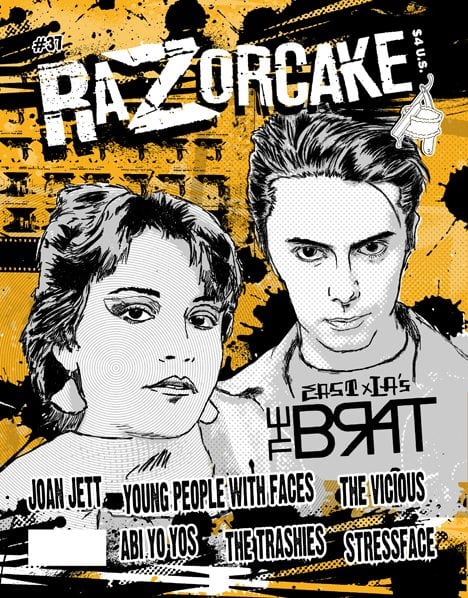 The Brat: Interview by Jimmy Alvarado. They’ve been going at it for so long that they don’t even want to be called punk anymore. And they can still kick most other bands collective asses. (http://www.myspace.com/thebrat)

Abi Yoyos: Interview by Daryl Gussin. Man, fuck trying to describe this band. They’re good, and they totally messed with some fancy hotel. That’s awesome with us. (http://www.myspace.com/abiyoyos)

The Vicious: Interview by Miss Erika and Todd Taylor. Remember when every other issue we’d be like, “Hey we’ve got some awesome band from Sweden”? Yeah, apparently all those bands decided to join forces and start another one. Sweet jebus. (http://www.myspace.com/thevicious/umea)

Young People With Faces: Interview by Chris Peigler. They may not be that old, but that doesn’t stop them from rocking it just like dudes that are waaaay older them. (http://www.myspace.com/youngpeoplewithfaces)

The Trashies: Interview by Megan Pants. Songs written in about eight minutes by people who haven’t even being playing their instruments for that long. Brought to you by Sparks. (http://www.myspace.com/thetrashies)

Liz O. goes to Vegas (but does not actually stay in Vegas).

Jim Ruland gives us the top ten reasons why L.A. is better than San Diego.

Rev. Nørb takes you on a tour of his jukebox,that—while detailed—has nothing to do with his penis.

Designated Dale talks about his and other kids’ upbringing.

Sean Carswell has seen a lot of murders.

Nardwuar talks to Joan Jett. Man, you don’t want to piss her off. Literally.

Plus: 36,326 words of record reviews, 2,988 words of zine reviews, 3,140 words of book reviews, 0 words of DVD reviews (DVDs got shafted this time), and we still get complaints that we haven’t covered your band.