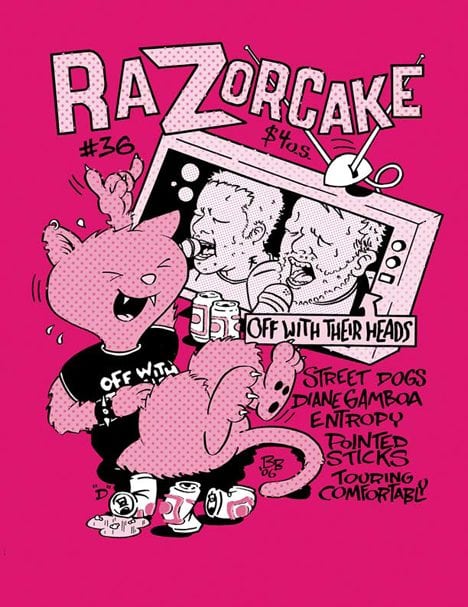 Off With Their Heads: Interview by Megan Pants. Truly one of the biggest mysteries in pop punk today, four enigmas drinking PBR Light while watching Bring It On. The most miserable things in the world never sounded so awesome. (http://www.geocities.com/owthmn/)

Touring Comfortably: Article by C.T. Terry. Never been on tour before? Want to learn how to do it and not drive yourself completely nuts? Well now you can learn how. You’re welcome.

Diane Gamboa: Interview by Jenny Moncayo. A portrait of an artist who makes you look like a fucking asshole. Diane got more done at age five than you probably do now.

Pointed Sticks: Interview by Allan Macinnis. It’s like Canadian punk/power pop legends reunite, and bam, we got ‘em. Hell, we got stuff from all over the worldon ‘em. (http://www.suddendeath.com/Band_Pages/Bands_pointed_sticks.html)

Entropy: Interview by Julia Smut. Old school L.A. punks, where it’s amazing enough they still have the same original lineup after so many years, you almost forget about everything else about them. (http://losangelesentropy.com/)

Liz O. has an “adult” conversation with some protestors.

Jim Ruland tells us why listening to Carlos Santana is never good for anybody.

Gary Hornberger hopes you had a happy holiday, and tells you about stuff he thinks is cool.

Ben Snakepit presents: The Festies (we swear, it’s not nearly as dirty as it sounds).

The Rhythm Chicken does his part to put on a drinking festival and shows the dudes who wrote Beer Fest just how it’s done.

Designated Dale talks about movie remakes (there’s talk of a Rock ‘N Roll High Schoolremake, so you know where this is going).

Kiyoshi Nakazawa gives an insight into the relationship between George Bush and Saddam.

Nardwuar talks to Feist about the right moment to start taking off your clothes in rock’n’roll.

Art isn’t happy with the state of modern toys.