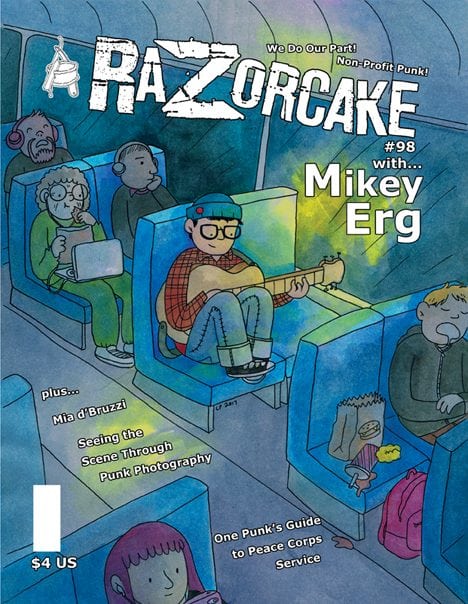 “Mike Yannich was a pivotal part of The Ergs! for the better part of a decade. He sang, played drums, and wrote many of the band’s heart-wrenching, self-effacing pop punk classics. He was among the DIY underground’s most prolific writers. Then he wasn’t. The band broke up in 2008 and new Mikey Erg songs faded from the landscape. He performed solo shows and played with countless other bands, but his songwriting went into hibernation.

Fast forward to 2016, and Mike has re-emerged with the release of Tentative Decisions, his first solo record, marking the full-force return of his distinctively personal songs. He’s never preached from on high nor wallowed in the depths of self pity. His lyrical stance is eye to eye with the listener, a conversation among equals. Here’s another one about a time that hurt like hell. This may be my song, but it’s our story; we’ve all been there. Filled with energy, dynamics, and first-listen hooks, his songs can appeal to a teenager going through their first break up, as well as the geezer wading through the demise of a decades-long relationship.

Mikey Erg and I have known each other for years but it’d been ages since we spoke at length. We met up on a sweltering summer night and talked over drinks, dinner, a spontaneous show across town, and then another round of drinks for good measure.” –Mike Faloon

“Though most punk fans recognize Mia d’Bruzzi as a core member of Frightwig, a band whose noise, sarcasm, wonkiness, and in-your-face feminism helped shape a one-of-kind miasmic rock’n’roll, she has spent decades as a musical chameleon, living the DIY creed like few others. Mia has shifted musical duties with ease and artful deviance. Her time spent in Mudwimin—the churning, harrowing, distorted, grunge-meets-riot grrrl (think Babes In Toyland)—distinctly contrasts her nimble, jazz-blend musicality of Mama Mia. Plus, her constant acoustic busking at farmers markets is a roving counterpart to her role as recently added singer in the legendary Mutants and mentor to Sticky Situation, a fuzz-pop band with under-age panache carved in a homegrown school of rock that just released Introduce the Moose, with righteous catchy tunes like “Don’t Judge Me!”

Meanwhile, Dizzy Twin is a joint effort with her multi-instrumental husband that showcases her post-genre, nuanced, silver-flowing, and swooning vocals. By combining punk’s blueprint with her own unfettered dynamism, d’Bruzzi effortlessly weaves an intense, gobsmacking honesty and sincerity. And always restless, she embodies a hunger and pulsating purpose unleashed in never-dead Frightwig too, who continue their psych-punk agitation.” –David Ensminger

”There has been a proliferation of books and documentary films about punk culture and history in recent  years. Though these media might feature some well-known photos from mostly album covers, the books and films rely heavily on previously unseen photographs made by people interested in documenting their scenes.

Of course, there are even more opportunities to see photos of well-known and more obscure bands on the internet. The shift from analog film to digital photography combined with the rapid growth of social media outlets has facilitated more opportunities for punks to create photos and share images locally and globally. For punk photographers who shot analog film in the past and who shoot with digital cameras in the present, many the goals remain the same: to visually record an energy and aesthetic that is so important to punk identity and culture and then share those experiences.

Although the availability of high quality, low-cost cameras (including cell phone cameras) creates more opportunities for people to photograph their everyday experiences, that doesn’t mean all photos are equally engaging. Some photographers develop distinct styles that can help us feel the experience of being in the shot. These photographers are able to navigate the bodies that move in waves at a show. And they do so in ways that capture those brief moments in time when something magical happens. A second earlier or a second later, and the photograph might be radically different and that exciting visual experience is lost to time.

The following roundtable interview features a conversation with four punk photographers. They have been involved with different scenes and have photographed during important moments in punk’s history. Their individual work and collective efforts have been crucial to telling visual stories about what it means to do and experience punk rock. We wanted to learn more about their aesthetic choices and hear their thoughts on how punk photography has changed and stayed the same.

Dawn Wirth is one of a handful of photographers to document the first wave of the Los Angeles punk rock scene. Her early work was published in various fanzines, such as Flipside, Sniffin’ Glue, Gen X, and White Stuff. She has also published two photo books.

Chris Boarts Larson self-published Slug & Lettuce fanzine and has been documenting the punk scene through photography for over twenty-five years. Chris has also been a contributing columnist to MRR, Profane Existence, and Razorcake.

Martin Sorrondeguy is vocalist for Los Crudos, Limp Wrist, and Needles among other projects. He has been documenting punks and shows since the mid-‘80s and has three photo books published, with a fourth on the way.

Patrick Houdek was born in Los Angeles, Calif., where he discovered punk rock. In 1985 he moved to Carbondale, Ill. and started P&S Productions to release compilation tapes featuring bands he loves. He also was an integral member of the scene that helped start the long-running punk house, Lost Cross in Carbondale. He currently resides in Chicago, where he takes photos of punk rock bands.” –Daniel Makagon

One Punk’s Guide to Peace Corps Service by Christopher Gordon

“I was twelve years old the first time I heard about the Peace Corps. My cousin Kerry wanted to join, but my uncle Mike wouldn’t let her go because he didn’t think it was safe for women. She ended up not going, and I always felt bad for her. When I was twenty-one and about to graduate from college, I found an advertisement on the Peace Corps’ website that said, “Can’t decide between the Peace Corps and grad school—why not both?” It was a link for the Masters International Program. It would take me four more years before I actually ended up joining, but my mind was set. I was going to be a Peace Corps Volunteer, and nobody was going to talk me out of it.

I can’t describe the force that drove me other than it was so deeply ingrained in me that this was something I was going to do. I felt really inspired by those old videos of President Kennedy describing his vision for what would eventually become the Peace Corps. It made sense to want to help people who were asking for it. It seemed admirable. There was something so romantic about the idea of leaving everything behind to go abroad, learn a new language, live with people in their communities, and volunteer.

My dad’s a Hungarian immigrant who left Budapest in 1977. His previous eight years were spent applying for visas only to be denied. His distaste for communism wasn’t enough to grant him immediate access into the United States. He ended up in a refugee camp in Austria before eventually making it to New York and later settling in California. My mom left a strict Catholic family behind in New Jersey at the age of twenty-three to move to California with a very minimal support system out west. It was in Los Angeles that my parents met.

I think it’s partly in my blood to take some risks, and I was quite honestly looking for my own adventure. One of the things I’ve learned from my parents over the years was the importance of following your dreams, and I was ready to follow mine.

I had been on DIY punk tours before, but I never found whatever it was I was looking for. I wanted something bigger than playing to ten people in some Mid-western basement. I love my band, but I didn’t feel like it was going to get any more popular, and I wasn’t willing to commit to touring full time. It never felt like there was enough return in it for me or for the people in the audience. Maybe it would have been different if I had been writing better songs, or if the audience had been bigger—I honestly don’t know. But I thought by joining the Peace Corps I would find what I was looking for.”

Art Fuentes has some decisions, decisions: “Monkey has some thinking to do.” (twitter)

“He was carried by the monarch through borders
hatched in the city of lost guidance
Only the hood knows who he is
Only the hood has seen him cry
Too afraid of his own masculinity
He yells at the love who tames him
She is quiet
She is the victim
of a broken dream
So tell me brown man, why hurt her?
She is as delicate as the monarch who birthed you.”
–Annissa, Brown Man (ig: @mi.jita)


This issue is dedicated to the memory of Don Rickles.