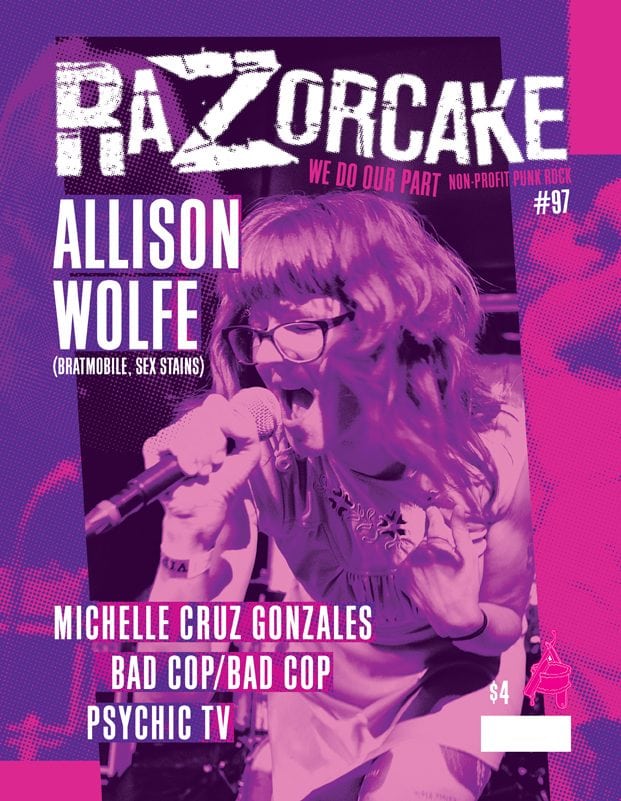 This issue is dedicated to the birth of Nora Jane Mason.

In alternate universes, this introduction could start with: “Allison Wolfe, Olympic champion gymnast.” Or “Allison Wolfe, first chair clarinet of the National Symphony Orchestra.” Or, Allison Wolfe, “Daughter of the woman who started the first women’s health clinic in Olympia, Wash. that got fire bombed.” Instead, it is my pleasure to introduce Allison Wolfe, one of the originators and torch bearers of riot grrrl in the ‘90s. Riot grrrl’s message was revolutionary, simple, and direct: fuck misogyny. All people are created equal, yet women were constantly treated as “lesser,” paid less, on fewer stages and in fewer bands, shoved to the back. Riot grrrl addressed women’s rights head-on in punk. They were confrontational. Women’s rights is a lesson that still needs to be taught—and fought for every day—until we have gender parity in all strata of culture, DIY punk included.

Allison helped make influential zines, formed Bratmobile with like-minded friends, and is the founder of Ladyfest. These are huge accomplishments, but it would be a big disservice to keep Allison pegged in isolation there as an artifact worthy of academic archiving. Her fire and drive arcs more than a decade beyond Bratmobile and Girl Germs. Through continuous involvement in bands—and a constant contact with cultural activism—Allison is a model of flexible stamina within DIY punk.

She currently lives in L.A., sings in the fucking great, punk-driven, funky, dancey, high-energy Sex Stains, and is earning a degree in journalism.

“Shut up and play.” Spitboy heard this so often from boys and men in their audiences that the band’s drummer Michelle “Todd” Gonzales used the angry phrase as a chapter title for her recently published memoir The Spitboy Rule: Tales of a Xicana in a Female Punk Band. “We were a message band,” said Gonzales, who recalls making tons of photocopies of Spitboy lyrics at Krishnacopy in Berkeley. The lyric sheets were distributed at shows during the ‘90s so the band’s feminist ideas wouldn’t be lost amidst the loud, fast music. Spitboy challenged racism, sexism, and patriarchy, including within the punk scene itself. They surprised some by overtly distancing themselves from the riot grrrl movement that took shape around the same time as Spitboy.

Spitboy released their first album, True Self Revealed, in 1992 and shared a split LP, Viviendo Asperamente—Roughly Living, with Los Crudos in 1995. Spitboy toured the U.S., played shows in Japan, New Zealand, and toured Europe with Citizen Fish. Before Spitboy, Gonzales played drums in Bitch Fight. After, she drummed in Instant Girl and later briefly played guitar with Kamala And The Karnivores, who recently had a reunion concert on Jan. 1, 2017.

Gonzales is a punk rock musician, mother, writer, and a professor at Las Positas College in Livermore, Calif. where she teaches English and creative writing, including a class on dystopian literature.

If punk rock has some revolutionary and political roots, then women and Xicanas have been among those who’ve challenged the isms that limit this on-going revolution. Gonzales’s book and blog are filled with insights about navigating life in a culture where race, gender, and class still weigh heavy on determining potential. And Gonzales manages to do this with a great sense of humor and hope.

Bad Cop/Bad Cop are a family of four strong individuals. And they’re advocates for us all. They come from different places and different backgrounds, but they’re united in purpose: there is no option but to rock! More than that, Bad Cop/Bad Cop are about empowering people to be themselves, stick together, and stand up for what’s right. Bad Cop/ Bad Cop are all about empowerment of marginalized people. Don’t let the name fool you. It wasn’t calculated and it isn’t a political statement. According to them, being yourself shouldn’t have to be a political statement.

The band came together in 2011 and were signed to Fat Wreck Chords by the end of 2013. It’s been a whirlwind of activity since that includes the release of an EP, a full length LP, and multiple tours across the U.S. and Europe. After returning from one tour across parts of the U.S. and Canada, and in the aftermath of one of—if not the most contentious presidential campaigns in history—Bad Cop/Bad Cop paid Razorcake a visit to talk about what drives them, both as a band and as a family.

From h/er involvement and formation of COUM Transmissions in Britain in the late ‘60s, to Throbbing Gristle, to Psychic TV, Genesis P-Orridge has inspired many people to simply start making art. The first time I saw Genesis was on a Target Video VHS where s/he was sucking face with an audience member all while playing bass. With Genesis anything was possible! Genesis uses the word “we” when s/he refers to h/erself. A true superhero of the modern era, it was very exciting to talk to h/er and h/ers longtime collaborator Edley ODowd.

Donna Ramone the self-identified “resident Muslim among us” combats Islamphobia, the Muslim ban, and racism under the Trump tyranny. (instagram)

Jim Ruland writes, “I no longer believe in heaven, but I know there is a hell.” (blog, twitter)

Cassie J. Sneider hit a deer, (then put it in the trunk). (blog, twitter)

Rev. Nørb lists people, places, and things that would make a better president than Trump. (Obama bottle opener and slice of mac and cheese pizza in the first ten). (website)

Puro Pinche Poetry: Gritos Del Barrio (Edited by Ever Velasquez and Nicole Macias)
“A homegirl will never envy but instead be inspired!
A homegirl will not give up on you nor judge you!
Homegirls will teach, listen, and learn together
Homegirls don’t take advantage of your kindness
Homegirls are tender while strong”
–Esperanza Cisneros (From Homegirls)

J.V. McDonough discusses leaving, being left, and lessons from dogs.