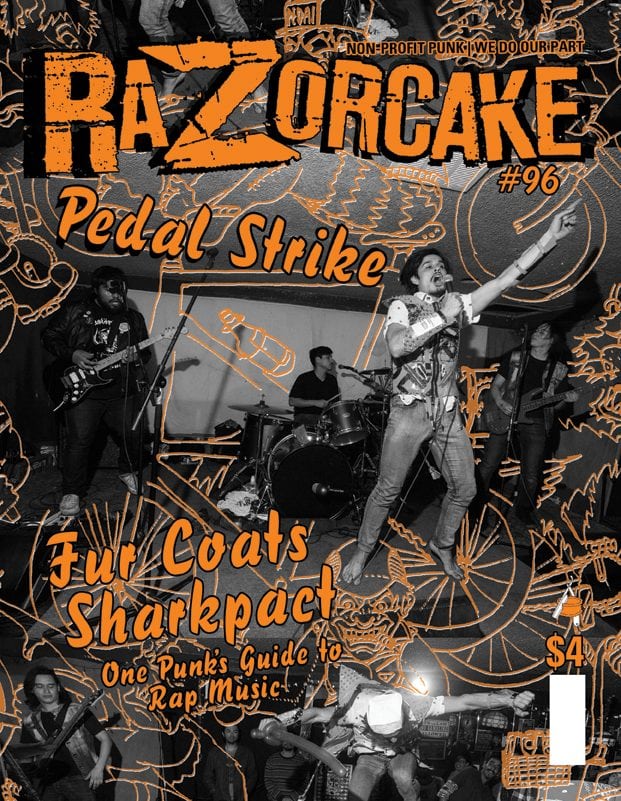 This issue is dedicated to the memory of Laila Rayyes.

This isn’t television. This isn’t Hollywood. This isn’t even the L.A. punk that has received attention from scholars and shoe companies. Pedal Strike is self-propelled, L.A. punk. This band is one of those rare examples of how good it can be when it all comes together to shirk clichés and genre pigeonholes. Community over competition.  Fuck your condos; this is development of the mind and body. These guys set up their own shows, release their own album, and have helped jumpstart their scene. It’s a manifestation of how engaging and fun a band can be while still standing for something. Pedal Strike represents what’s happening on the streets of this city, in between the lanes. The work you have to put in just to create some space for yourself, with detractors and cops on every corner. Defeat isn’t an option.

And then there’s the sound: ripping, garagey, surf-punk guitar, tailed by a rhythm section that predates high school, with The Beast From The Northeast leading the charge. This is Los Angeles. Pedal Strike! Ride your bike! –Daryl­­

Marc Ruvolo is a luminary in Chicago punk. Founder of the hardcore band No Empathy, he was influential in the development of that scene in the 1980s. As co-founder of Johann’s Face Records, Marc was involved in early releases by bands such as Alkaline Trio and the Smoking Popes. Coming out as gay in the early 1990s inadvertently made Marc an important part of an emerging homocore scene that helped reshape the landscape of North American punk. From being an active musician, overseeing a minor but influential label, and running Bucket O’Blood Books and Records, Marc was an institution in Chicago for many decades.

Recently, Marc relocated to Austin, Texas, taking his band Fur Coats with him. The Fur Coats’ 2014 release The League of Extraordinary Octopuses is a masterful blend of melodic pop punk and darkly twisted humor. Originally a solo-plus-rotating-cast-of-friends project, the relocated Fur Coats has solidified into a solid trio with the addition of veteran drummer Craig Nichols (of Guided By Voices, The Method, and a hundred other bands) and youngster Jake Figallo on bass. I met up with the Fur Coats before their set at Awesome Fest. We headed around the corner to a small bar, where Marc started telling stories before I even had a chance to get my recorder out. Noting that Razorcake’s editor Todd Taylor started out at Flipside, Marc was already telling stories about Al Flipside by the time I hit “record”…

In the wee hours after last call, I’m lucky if an overworked bartender, just off his or her late night shift, gets in my cab to go home. Though the world of cabdrivers is a weird, mid-world vacuum compared to a buzzing bar, we’ve both been dealing with the same drunken, wealthy, entitled dirtbags all night. There’s an understanding between cabbies and bartenders. They’re the first human that’s really seen you all night. The first person that’s really talked with you. You share stories, bitch a little, and have a few laughs. And without fail, they tip well, (better than any rich suit) letting you know you’re appreciated. This bartender-cabbie connection means everything on a shitty night or after a series of them. I feel a similar sensation when I listen to Sharkpact.

Sharkpact, a duo from Olympia, is unafraid to express feelings of hopelessness, profound sadness, and despair of both the state of the world and their inability to change it. I don’t need a self-proclaimed “activist” band to tell me I’m a “sheeple.” I don’t need sloganeering or rhetoric. I need an aware band. Not sugarcoating the truth, but not stooping to an oversimplified, fuck-it-all nihilism. Rugged and spare, Jefferson’s spastic drumming meets the crashing avalanche of Camille’s huge distorted synth riffing over both their warm and expressive vocals. They deal with heavy shit, but listening to their songs doesn’t bring you down. Sharkpact offers solace and rest for their listeners and themselves. Talking to Camille and Jefferson (and their partner in crime/producer, Joe), I found that just about every part of the band’s lives seems dedicated to resistance. This dedication takes immense courage and, perhaps, is what gives Sharkpact their musical power.

One Punk’s Guide to Rap Music by Chris L Terry

“I was born in March of 1979, two months after the first rap record was ever released. That would be Rapper’s Delight by The Sugarhill Gang. It’s the song that starts off with some funky gibberish: ‘Hip hop the hibbit the hibbit to the hip hip hop ya don’t stop the rocking...’

My parents didn’t play it in the hospital when I was born, but I feel like I’ve been hearing that song for my whole life. In my geekier moments, I’m pleased to be the same age as rap music. We’ve grown up together.”

Cassie J. Sneider writes, “There was no light, and I was thrown up on.” (blog, twitter)

Designated Dale is not impressed with London burnings.

Art Fuentes reminds us to love.

Puro Pinche Poetry: Gritos Del Barrio (Edited by Ever Velasquez and Nicole Macias)
“I love the weird ones.
The brown ones.
Las Morenitas with mohawks,
Chelseas, and shaved heads.
With fishnets against their brownness
Como una sirena caught in a net.”
–Alma Rosa (from Ska y Frijoles)

Rhythm Chicken remembers his time as a young chickie flipping the bird. (facebook)

Jennifer Whiteford unfortunately has to explain to fools that socks are gender neutral.

This issue is also dedicated to the memory of Gwen Ifill.