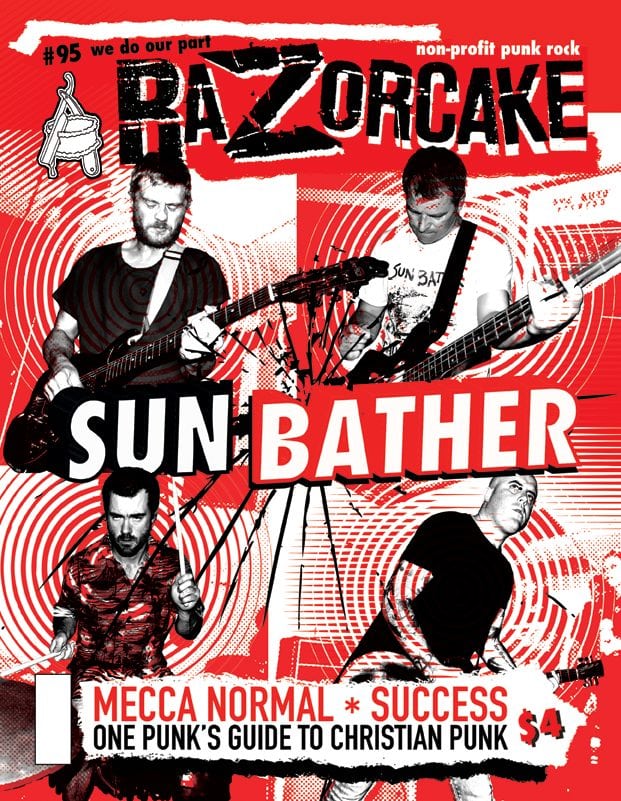 This issue is dedicated to the marriage of Liz Prince and Kyle Folson.

“Tommas is a big, fat fuckin’ liar. He lied to me repeatedly a decade ago when I interviewed him in Gorilla Angreb. It turns out Peter Bonneman (Amdi Petersens Armé, No Hope For The Kids) wasn’t a teenage drug offender and hard-time incarcerated graffiti artist. Peter’s no better. “Spild Af Vinyl” does not actually mean “large dildo manufacturing corporation” in Danish. I’m saying this because I had faulty ammunition going into this interview with Sun Bather, a band comprised of two Danes, a German, and Santa Cruzian. My research confidence was supremely shaken. Was it true that Will (Born/Dead, Red Dons) grew up in the Children of God cult and had a torn muscle in his chest from being punched? Did Fabian (Burial) ever give up or give in? Is “Sun Bather” Danish for “Defenders of Disneyland”? Why the flute? All of those questions get answered, but who knows what new falsehoods have been forged.

Here’s what I do know. Sun Bather is important rock. When some musicians slow down the tempo, they just suck and get boring. However, Sun Bather stretches out on a nice little deck of garage rock. They take the waggling swagger of the Cramps; the taut, steel airiness of The Estranged; the “What? Yeah!” of Black Randy And The Metrosquad to heat that in the white-hot embers of all four members’ extensive musical pedigrees. I cannot recommend their two 7”s and 12”EP enough.

Ah, screw it. There’s no need for a music history lesson here. You don’t need to know any of that. Pull out a fold-up foil neck tanner, ratchet up the rays, and let Sun Bather’s skin cancer music bronze you.”

“Jean Smith is half of the powerful, prolific, and poetry-infused duo Mecca Normal, whose uncanny, bare-boned punk helped paved the way for riot grrrl’s forceful attack on gender norms and its embodiment of DIY punk production. Her one-of-a-kind vocal delivery, postmodern storytelling, and incisive intimacy truly make her a maverick. Stretching over thirteen albums alongside musical partner David Lester, who channels power chords and jazz riffs with ease and gusto, the two have plowed through the decades since the mid-‘80s, leaving behind output that complicates and blurs the boundaries between genres.

Some may wonder if the songs are more akin to spoken word—monologues set to music, soundtracks of an inner-cinema of consciousness at work, or simply punk rock that resists tired formulas and well-worn expectations.

On seminal albums like Jarred Up, their music seems to hearken back to the wide-open days of the late 1970s. One may glean sonic specks of the rambling poetics of John Cooper Clarke; the agonizing art brut of Lydia Lunch; the feminism and unconventional style of Au Pairs and Kleenex; portions of Gang Of Four’s politics (in which leisure and domesticity is put under the microscope as much as economic systems); the compressed and spare rhythmic roil of Young Marble Giants; and even Crass’s commitment to overturn the old world order.

Yet the band’s sometimes choppy, electric-blaze guitar work also feels akin to Billy Bragg’s punchier moments, and Jean’s lyrical onslaught—highly personalized narratives that spare no detail—physical, spiritual, and sexual—plainly foreshadowed the templates of Bikini Kill, Bratmobile, and others. Meanwhile, her ongoing painting and novels have earned her much praise and a cult following.”

“For the last decade, the members of Success have kept steadfast smiles on their faces. There’s a unique quality about these people—they have the ability to stay positive all the time and that translates directly into their music. I’ve often reflected on my twenties, now nearly two years gone, and measured my goals against my accomplishments. What I boil it down to—more often than I’d like—is that I spent the first half thinking I’d live forever and the second half knowing I won’t. Success bridges that gap in the tightest of balancing acts. While they’re not quite the Peter Pans of pop punk, they’re still grappling adulthood with a light heart and a spring in their steps.

They offer blue collar workers rose colored glasses, and do so with exuberance. The Seattle Sounders soccer team started playing two of their songs during games because they were drawn to the motivation of the underdog that Success has in their lyrics. Now they’re blasted over the stadium speakers with the likes of Cock Sparrer. On a sunny Northwest day, I sat down with Success in the alley behind their practice spot and talked about their roots in Enumclaw, Wash., building a band into a family, and what keeps them going. They are the history of a boring town and they want to share that with you.”

One Punk’s Guide to Christian Punk by Kurt Morris:

“I can almost guarantee your first thought when you saw the title to this piece was, “Christian punk? What in the world is an article about Christian punk doing in Razorcake?” Well, it’s likely you’ve come across a punk or two (especially if you live in an area with a predominantly Christian population) who describes themselves as a Christian punk. And if you’re not a Christian punk I’m sure you’ve wondered how such terms could be put together. Isn’t punk against Christianity? Thankfully for you, dear readers, during my high school and college years I was a Christian punk (or, more accurately, a punk who was a Christian).

My hope is to give you some background on the genre, the major players, and how it sees itself in relation to the non-Christian punk scene. This won’t be an exhaustive history—that would require a book (which is unfortunately not yet written). Instead, it will be this punk’s take on Christian punk.

I grew up in Indiana, raised by Christian parents and attended our evangelical church two or three times a week. I wasn’t forced to go—I was a Christian, enjoyed attending youth group events, and have a lot of good memories from that time period. While I can’t say what the reasons were for others being Christian punks, my reasons caused a great deal of conflict in my adolescent mind. I wanted to rebel and fit in. I desired to be my own person—someone who was unique and didn’t go along with the crowd. I wanted to showcase the music I listened to, while also please the god who I believed deserved my allegiance. Somehow my friends and I found a way to combine the punk rock idea of rebellion with Christian values. I was willing to rock the boat, but not too much.”

Donna Ramone understands how demoralizing looking for work can be and offers some tips for self-care.

Designated Dale describes the fucktastic jackassery that was the Razorcake quinceañera.

Art Fuentes loves his Razorcake family, and we love him.

Bianca has to do her civic duty amid a Deflated Man.

Rhythm Chicken is aping the Animal meats, I mean beats, from the Muppet Show. (facebook)

J.V. McDonough considers the necessities and niceties of touring.

Ben Snakepit finally understands the joke in the Simpsons about nuts and gum: “Together at last!”