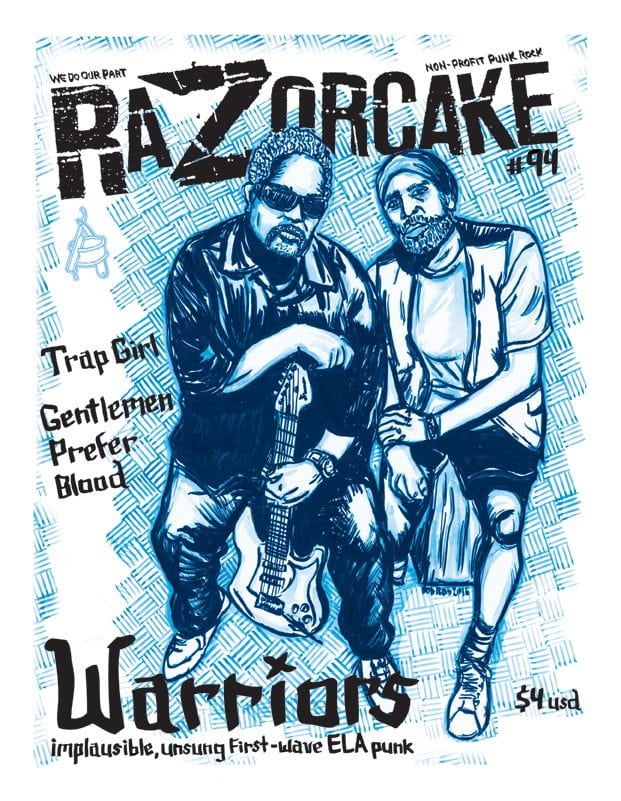 This issue is also dedicated to the October 10th wedding anniversary of Yvonne and Dale.

“In a tired world of screwed up, used up, and bad clichés, “Far from the madding crowd” is one that comes close to describing The Warriors. Unrivaled and historical, The Warriors are East Los Angeles’ least Chicano, most important, exceedingly groundbreaking, and utmost implausible of unsung hero bands; yet their core, side, and guest members (and punk trainees) read like a biblical “who’s who” list of their more famous posterities hailing from east of the bridges that separate the eastside from the rest of Los Angeles.

This is the band that defined the Eastside DIY movement, before the Vex became the flagship club of the early ‘80s eastside underground, by originating and introducing the now-common backyard party/concert to the confused, reluctant, and often “softly segregated” Hollywood scene of the 1970s. Imagine the likes of Love’s Arthur Lee and a young Eddie Van Halen, along with four hundred people and a flock of cops, attending illegal parties that somehow always managed to avoid ending in a major riot.

Spearheaded by brothers Brian and Barry Qualls, The Warriors busted down barriers and confounded Hollywood/Westside bookers and the underground elite’s preconceptions about East L.A., then morphed into the white-hot flash—and major label A&R darlings—that was The Shades.

They believed in the radical, social, and musical emancipation brought about by the subversive L.A. and New York underground scenes and press.

Wedged in the late ‘70s revolution that promised to liberate the knotted down musical counterculture, The Warriors played hard and ran fast out of the East Los barrios with their multi-racial, multiple gendered, and multi-genre band, fueled by optimism and liberation theology-style idealism before running headlong into the established industry walls that even the most avid idealists or heaviest revolutionaries couldn’t avoid, or break.

But The Warriors knew it was a wall they could at least crack, and they never stopped trying. I know, because I was there as they kicked the daylights out of every band with which they shared the stage, some of which now live in infamy. To work with, play with, or just hang around with them was to attend the best rock school taught by the rules of the street—you learned to write and play everything and cook up concoctions of Ray Charles and Kraftwerk, hard hundred-year-old rancheras fueled by “Street Fighting Man”-era Stones energy, and finalized with gospel-inspired vocals. They did this with punk, blues, techno punk instrumentation, and multiple drummers, all on one stage.

Always “courted” but never recorded, The Warriors music remains a memory in motion, but theirs was the kind of music that even today would make you roll down your window to get a better listen from out of the car next to you as you breeze down Whittier Blvd.

Far from the madding crowd they remain, the best band you’ll likely never hear, and we’re all the worse for it.”

“Trap Girl’s music reminds me of when I simultaneously feel unsafe but am ready to throw down. Growing up workng class, in an environment where sometimes you have to fight to live, that feeling is something that stays with you forever. But as a queer adult you feel a different yet persisting feeling. You’re constantly living on the edge of safety or survival, may it be physically or financially. Trap Girl captures the essence of that moment when you realize you are going to have to do whatever it takes to survive. Their music is loud, gritty, impulsive, and powerful. It’s also beautiful, like gold chiffon covered in blood, dirt, and glass. It shimmers and it cuts. Sometimes it’s messy. It fucks you up while giving you life. Trap Girl threatens to kill rapists, protect women, and look good while doing so.

I hung out with Trap Girl on a clear spring night.  We chatted on the patio of a new DIY venue in Long Beach called The Forrest, the same space Trap Girl played Darcy Crash Distro’s queer zine fest Zine Queens a few days before. The air was thick with crickets chirping, busses, and sirens. We talked about their roots, the L.A. punk scene, and the importance of physical spaces as gentrification fights to steal every last ounce of culture the tired clutches of the underground. We discussed how queer punk elders helped us become the best babes we could ever imagine, an apprenticeship, through relationships in the flesh and fandom we never realized we had, but so desperately needed. Trap Girl’s recording may never compare to their live shows, something you have to see. Trap Girl lives the legacy of classic L.A. hardcore punk greats like The Germs and The Bags while breathing confrontational and queer new life into the old punk formula. They’re bringing new visibility to what it is to be trans, big, brown, glamorous, and fucking pissed in Los Angeles.”

“Gentlemen Prefer Blood—made up of an amateur comedian, a doctor, and a scruffy-looking nerf herder—bring the right amount of intensity and aggression to the world of DIY. The well-thought, heavy riffs intertwine with the gritty vocals and lock into the Animal-style drumming, creating a solid sound. GPB’s version of self-expression is a reflection of their appreciation of music. They cite Face To Face as one of their musical influences.

The Los Angeles-based trio was one of the first bands I got into that included members I didn’t go to high school with. They drew me in simply because their albums Illegitimi Non Carborundum and Used Books and Guns were not like the records I was so accustomed to hearing. Each song is genuine and filled with substance. At their shows, they consistently create an inviting space where everyone is included in on the fun that they bring on stage. Ultimately, Gentlemen Prefer Blood stay true to themselves in a town full of Guns N’ Roses wannabes.”

Jim Ruland gets down and dirty with Keith Morris. (blog, twitter)

Designated Dale is talking shit on the internet.

Art Fuentes is sweating through his nerd shirt.

Rhythm Chicken is the Mary Poppins of chicken rhythms. (facebook)

Jennifer Whiteford remembers what it’s like to discover new music.

This issue is dedicated to the memory of Erik Peterson.