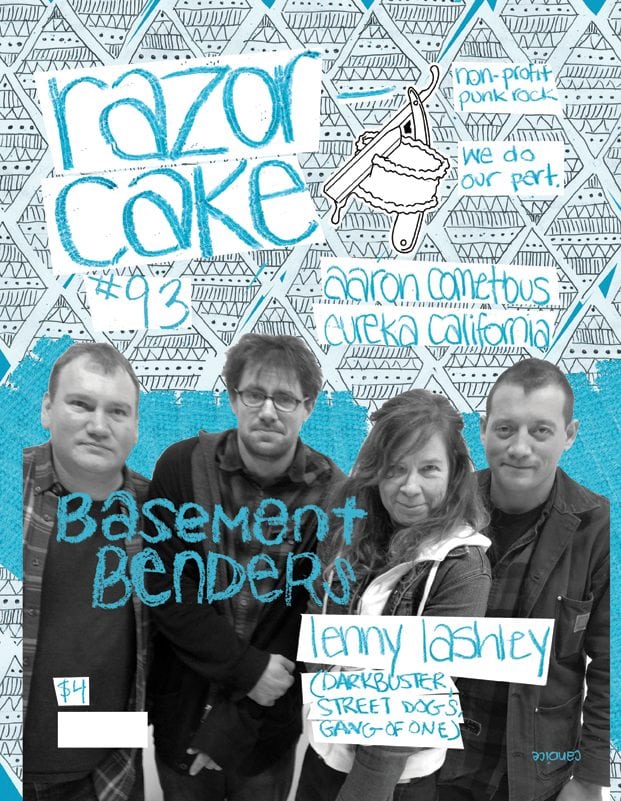 Pick it up here:

This issue is also dedicated to Annie Bridget McKenna who turns thirteen next month and still doesn’t like punk.

“Aaron Cometbus has been putting zines together for thirty-five years. The bedrock influence of Cometbus, the zine he founded and helms, is undeniable. His writing has helped shape how many DIY punks see themselves. The East Bay in Northern California during the early- to mid-‘90s, was an electric time for punk rock. Aaron did more than document that time and place: he created enduring archetypes still present in the scene. Of course, he didn’t invent drinking coffee, dumpstering, riding bikes, sleeping rough, scamming, Greyhound bus rides, or punk love that includes makeout sessions under bridges, but he surely stitched these things together into a powerful pattern on the vest of punk’s subconscious.

For better or worse.

Aaron reached out to me several years back after we had both been interviewed for the book, Beyond the Music. He interested in learning about Razorcake’s processes; the things that keep it alive. I enjoy talking shop with fellow long-timers, comparing notes and scars on shipping, distribution, layout technique, mechanical failures, editorial throughputs, wrangling contributors. It’s nutsy-boltsy, real-world zine survival stuff, so I was happy to talk with him. Around this same timeframe, Aaron co-authored an eponymous book about Radon, one of my favorite bands, with my friend Travis Fristoe.

So Razorcake contributor Madeline Bridenbaugh and I headed east.

New York’s subway system had me turned around. I wasn’t one hundred percent sure I was in front of the correct building until I recognized Aaron’s distinctive handwriting next to the button of an apartment. Madeline and I were invited down a narrow hallway, past a narrow bathroom and kitchen. We sat down at a table with cement blocks under the legs to make it taller. We were flanked by an entire wall of books, floor to ceiling from the front room to the bedroom. Two cats without names visited us.

Aaron is intense, I was told. He’s opinionated, particular, and isn’t afraid to disagree. The conversation that transpired was personally inspiring. The three of us talked about punk, but we also talked about writing—capturing both the light and the dark to display honest human experience. Aaron admitted that through growth and age, he doesn’t agree with all that he’s written. We talked about the death of expectations and the power of reevaluation.

Aaron could have easily become a parody of himself, a headstrong elder punk on an endless Greyhound bus to nowhere, romantically dumpster diving recycled stories in issue after issue of Cometbus. Instead, he’s a contemporary, relevant punk of modest means and desires who continues to carve out stories, boxing his own issues before standing in line at the post office.” –Todd

This interview is dedicated to the memory of Travis Fristoe.

Eureka California: Interview and introduction by Will Fitzpatrick.

“I didn’t mean to fall in love. One minute I was flicking through a stack of 7”s a mate from Athens, Ga. had sent over to my Liverpool home (a cultural exchange, of sorts; you send me your buddies’ bands, I’ll send you mine). Next thing I knew, I’d fallen head over heels in that gloriously exciting way that only pop music can do to you—a sharp kick to the head, a deft squeeze of the heart, an electric shock to the hips. Gorgeous, garagey slop teemed out of the speakers, coated in fuzz and resplendent with glistening melody. Eureka California’s Modern Times EP had found me, and I was utterly smitten.

Fast-forward five years, and if anything the feeling has only deepened. The trio’s 2012 debut album Big Cats Can Swim was a riot of sunny melody, Guided By Voices clunk, and sassy-smart lyricism. Within a year, they’d lost bassist Charles Walker but gained a certain rough-edged chutzpah that justified Jake and Marie’s decision to carry on as a duo, as their sophomore effort Crunch turned up the hooks and stopped sandpapering the corners. Eureka California toured the shit out of those records, embarking on a virtually endless trip that’s brought them to the U.K. on three occasions. They’re probably trying to book a show in your town right now. Hard work isn’t a real reason to fall for a band, but it’s a good way to catch ‘em in the first place.

I’ve toured with Eureka California (twice), my own band’s shared a slab of 7” vinyl with them, and I’m lucky to count them as friends. But that doesn’t mean I’m exempt from awe, and their latest LP Versus is going to make a lot of people feel the same way. It’s not so much a step forward as a stratospheric soar. Bigger, better, and brighter than they’ve ever been, it’s one of the best noise-pop records you’ll hear this year; Pollard plus Malkmus multiplied by McCaughan, all to the power of Chapel Hill’s groundswell of ‘90s super-shonk. I caught up with Jake and Marie to find out a little more about the record and the band itself. Once again, my heart skipped a beat.” –Will

“Punk is a youth culture if you believe the packaging on the box that’s still being sold forty years after the term “punk” was coined and attached to music. The box is bullshit. Punk is what is made of it. To me and many around me, it continues to be an examined life. Punk’s a constant thread in the thick rope of all our lives, not a button that falls off after a couple of years, rusty after going through the wash.

Basement Benders are a DIY punk band in the grand Southern tradition of the Grabass Charlestons, Bitchin’, and The Tim Version. As points of helpful musical reference, members have been or are in The Future Virgins, This Bike Is A Pipebomb, Black Rainbow, and The Stun Guns. The music they play is comfortably well-worn but not threadbare, well used but not used up. It isn’t boastfully shiny. It’s scuffed, repaired, and patched. Lived in. Cared for. Familiar but not predictably rutted. Their songs sound like joy tinged with the sadness of loss. In their debut LP Lydiad, they sing of overcoming cancer and celebrating a friend’s wedding—the dappled light of melancholy and the redemptive small triumphs that come from living in the present.

I had the chance to hang out with them and we talked—among other things—about police interaction in Mexico, massive grease traps, plant taxonomy, smoking in Japan, ghosts, and hidden mathematics. The form of DIY punk I believe in is based on self-devotion, not shameless promotion. When I listen to the Basement Benders, I hear nothing less than the grand egalitarian spirit of punk spreading its wings.” –Todd


Lenny Lashley: Interview by Madeline Bridenbaugh and Todd Taylor.
“Lenny Lashley is a fixture of the punk rock community. He plays guitar for the Street Dogs. Darkbuster, a band now over a decade old, is still one of my favorite punk/ska bands of all time. Gang Of One showcases his songwriting abilities with acoustic and rock songs. Lenny & The Piss Poor Boys I could only describe as an achingly good Boston-Irish country band. These are only a few of his projects.
I already knew Lenny Lashley was an incredibly talented musician, but I more often heard that he was just a wicked good guy—even though he knows it isn’t always easy to be that way. And when Todd and I walked into the Midway Café in Boston to actually talk to Lenny, what we found was an unassuming guy sitting at the empty bar, playing his guitar.” –Madeline


Donna Ramone remembers the time she was almost murdered.

Ben Snakepit only listens to obscure bands that nobody likes.

Cassie J. Sneider thinks jobs should pay you based on how demoralized you are. (blog, twitter)

Rev. Nørb is learning the error of his ways... maybe. (website)

Designated Dale was a bad employee.

Adrian Chi’s aesthetic is being influenced by pop culture. (facebook)

Art Fuentes thinks that art (like the beret kind, not himself) rules.

Rhythm Chicken is on drugs with a puréed spine and asking for cheeseburgers. (facebook)

Nardwuar The Human Serviette interviews Snoop Doggy Dogg for the eighth time and finally gives him something he doesn’t want. (website)

J.V. McDonough is swearing in every language.

This issue is dedicated to the memory of Barker Gee.