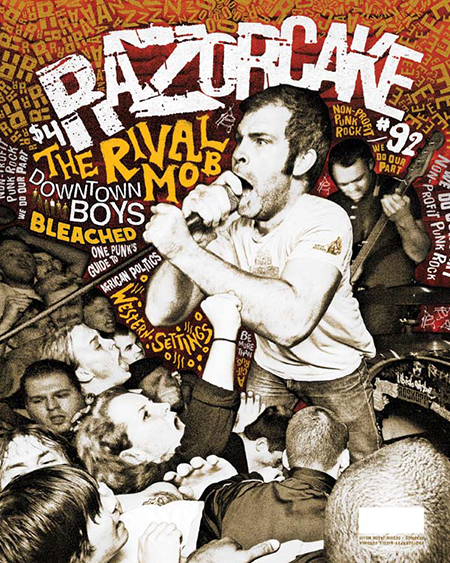 The Rival Mob: Interview by Todd Taylor and Madeline Bridenbaugh.

“Thuggy hardcore made by older guys; that’s Rival Mob in a nutshell.I cut my teeth on punk in the late ‘80s, early ‘90s. It was a scarier time at shows and I don’t miss the violence. I think it’s stupid to romanticize people getting stabbed, rat-packed, curbed, and crippled to prove that punk was dangerous or a threat. Yet I still sometimes crave nastiness in the music itself—unapologetic, raw-meat, acid-in-the-wound, life-is-fucked, punch-a-koala, it-won’t-get-better hardcore punk. Much like with Out Cold, I’m cool with hate as long as it’s spread across everything equally. I’m cool with not thinking sometimes, with using my Neanderthal brain to channel the basic need to smash shit to itty-bitty bits—as long as no one besides me gets hurt in the process. Madeline and I met up with Doug and Justin of Rival Mob at Doug’s “bubble” tea shop in Boston. I was concerned that we’d encounter the Rival Mob party line to maintain mystery, or a hardcore image. My fear proved to be unfounded. They were candid and forthright, not only about themselves, but the band and contemporary hardcore. Doug wishes he could eat an apple without his jaw popping out. Justin equates hardcore fests with cosplay that aren’t as cool as Star Trek conventions. What follows is an honest conversation told by people who’ve been in the trenches for decades.” –Todd

Downtown Boys: Interview by Todd Taylor and Madeline Bridenbaugh.On first listen, Providence, R.I. punk band Downtown Boys reminded me of a contemporary interpretation of X-Ray Spex: powerful energy radiating from a brilliantine core. There’s politics punctuated by horn-infused music that is contagiously danceable. Full Communism is a fantastic album.I didn’t know any of the band members before this interview, so as is my practice, I made a zine of all the research I did on the band—printouts of previous interviews and lyrics. I watched their videos. This is what I call the “text” (versus the sound) of a band. What they’ve said, what they’ve been asked. I highlighted quotes, like Victoria saying, “My concha no es bastante blanca para ti,” during a performance at a Jewish museum. I noted how often Selena and Rage Against The Machine were referred to in interviews but few contemporary punk bands or other political chicana icons. I found out Victoria and Joey have long histories in activism, as they talked clearly about politics, labor, sexism, racism, capitalism’s ongoing legacy of slavery, and neocolonialism. So it was armed with all of that background, that I met Joey, who picked us up at the train station and invited me up to their warehouse space in an industrial part of town. The following interview didn’t go fully as I’d hoped or planned—as you’ll soon see. It was contentious at times on both sides, but provides food for thought. I disagree with Victoria’s assessment that Razorcake is part of the “non-profit industrial complex,” but I think it’s important people who have agreed to put aside time to talk to us have the right to say what they want. We owe bands an honest representation of their ideas, whether we agree with them or not; that’s why we have question-and-answer format interviews. After its conclusion, Adrienne and Mary took us to absolutely dynamite Chinese food, and we talked for well over another hour before they dropped us off at our hotel.” –Todd

“If you’ve ever wondered what The Fabulous Stains would sound like if they lived beyond the silver screen, Southern California’s Bleached is that band. The heart of Bleached—sisters Jennifer and Jessie Clavin—are proud Valley babies who rose from the ashes of their tiny but mighty punk rock experiment Mika Miko. The surf/garage seeds they planted with their previous handful of singles, EP, and debut LP Ride Your Heart, blossomed into towering, sun-kissed pop sing-alongs for Bleached. Welcome the Worms, their latest release, is smartly written, totally catchy, gloriously consumable, and delivered with an appreciation of the music that’s come before and inspired them to the max. Jennifer and Jessie recently sat down to chat about all things related to the importance of lyrics, tour goals (cheese and Greece), and the woman in her bare ass walking down the street wearing nothing but a Bleached jean jacket—so let’s get to it.”

One Punk’s Guide To African Politics by Kevin Dunn“In my not-so-secret life, I am a scholar of African politics. My interest in Africa came from being an anti-racist activist in the American South. In college, I got involved in the anti-apartheid movement and realized how little I knew about Africa and how simplistic the media coverage was. Fortunately, I had a professor who was an expert on African politics and I took every course he had to offer. I began to realize that even though Africa was treated marginally by the media, it was central to world affairs: the U.S. and U.S.S.R. fought proxy wars there, they and other powers conspired to overthrow African governments, and all worked hard to ensure they had access to vital African resources and raw materials (from copper, gold, and diamonds to cotton, chocolate, and uranium). The more I learned, the more I realized how intertwined Africa was with world affairs and everyone’s daily life. I continued studying Africa in graduate school and have spent time in numerous countries across the continent in the subsequent years.

A few years ago, my friend Pierre Englebert and I wrote the textbook Inside African Politics. If you take a college course on African politics, chances are pretty high that you’ll be assigned that book. When writing it, Pierre and I cringed at how much we had to simplify and generalize in order to make everything fit into one book. If we were generalizing then, I’m simplifying things in this essay to an epic degree. It is a zine-length piece on a multifaceted subject, which I hope will set the foundation for a greater understanding and interest in a complex topic.

Since punk taught me that I didn’t need to write a complicated ten-minute song to get my ideas across, this essay is a distillation of focused ideas, not an omnibus of all that is African politics; The Minutemen wrote more intelligent songs than Bob Dylan ever did. Punk taught me to question what governments and the media told me. We need to push beyond the bullshit and see how all our lives are interconnected across the globe. What happens in Africa impacts us, just as our actions (however small) impact Africa. Punk taught me that our personal choices matter, from the products we buy to the food we eat: when we buy fair trade coffee, it has an impact; when we buy a cell phone with minerals from Africa, it has an impact. Punk taught me that being informed and engaged means not allowing others with less-principled motives to call the shots. Consider this your punk rock primer to African politics.”

Western Settings: Interview by Madeline Bridenbaugh and Todd Taylor.
“Western Settings is a (punkish) (pop) punk band from San Diego, Calif. It is the kind of band that keeps getting better, that you’ll catch yourself listening to or singing along with again and again. The instrumentals are energized and melodic, with influences running the gamut, and the uniquely listenable, gruff vocals deliver often sentimental lyrics. When I moved from Denver to Los Angeles, Western Settings’ Yes It Is—which I was already frequently listening to and in love with—was the first record I bought on wax. Their next EP Old Pain was even better. The tagline of La Escalera Records, guitarist Will’s label and home to their EP, is: “Without each other we have nothing!” At its core, the deep connection people have to this band is clear to me: we have each other. This is due in part to their lyrics, and in part to them; if you have met these guys even once, there’s a good chance they already feel like friends. If you haven’t met them, their records can still make you feel that way. Western Settings is four guys who eat burritos and make good songs—and are the biggest sweethearts you’ll ever meet besides Suge Knight.” –Madeline

Jim Ruland is coming to grips with his daughter’s musical interests.

Cassie J. Sneider DJs for a room full of ex-boyfriends and Nazareth fans (with some overlap, probably).

Rev. Nørb goes cosplaying as himself and is remembered.

Designated Dale is celebrating the odd fortieth anniversary of the debut Ramones LP.

Art Fuentes asks, “What’s the sound of one burrito chewing?”


This issue is dedicated to the memory of Tim Beaty.
Tim Beaty was shot and killed, the tragic result of a fight in a neighboring house. Two people ran to Tim’s house for help to escape gunshots. Tim shielded them by laying on top of them on the floor. He was fatally wounded.

A trust has been set up to help with Tim’s son’s future. Donations can be made here.