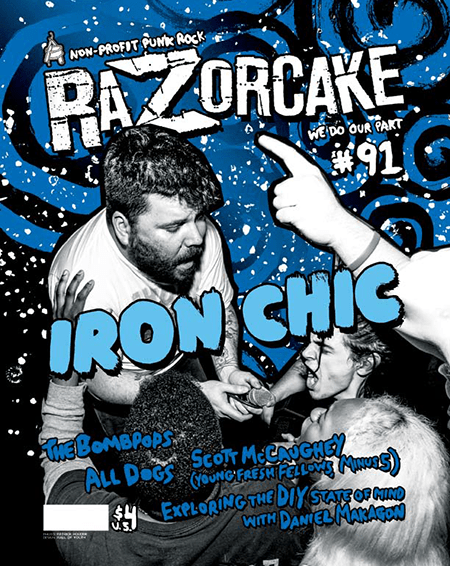 Razorcake #91 from 2016 featuring Iron Chic, The Bombpops, All Dogs, Scott McCaughey, and “Exploring the DIY State of Mind” with Daniel Makagon

“The Hobo House in Long Island looks pretty much like every other house on the street except with more broken things in the front yard.

There’s a high-mileage mini-van in the driveway, “Up the Punx” stencil graffiti and a Latterman sticker on the front door. Phil answers the door and leads us back to a sparse, ordinary room with acoustic foam on parts of the walls and ceiling. Monitoring speakers flank the computer. Exposed PVC pipes from upstairs are above us. Cigarette smoke fills the room.

Downstairs from where this interview happened is where Iron Chic has done most, if not all of their recording. This house is their nerve center. It’s not fancy. It’s functional; all geared towards recording music.

Iron Chic isn’t a band that lends itself well to hyperbole; I just really like them. They’re a band that plays melodic and heartfelt punk music. It’s really fucking catchy. I have listened to their two full-length LPs over and over again, for several years. Triangulate Low Culture, Tiltwheel, and RVIVR and you’re in the vicinity. It’s emotionally honest, strident DIY punk.

Mike Dumps and Jason Lubrano show up shortly after us. They’re unassuming, warm, a little quiet, like Phil.”

The Bombpops: Madeline Bridenbaugh and Todd Taylor get saucy with the Bombpops.
“How many Bombpops does it take to get a sugar high on ‘90s skate-influenced pop punk? I’d say about four straight out of Southern California in the form of two shredding lady guitarists and two dudes in a long-familiar rhythm section. The Bombpops are back to a touring schedule as frenetic as their pop punk sound and party-on-stage performances following personal breaks, personnel changes, and multiple hospital visits. They may not be clean, and they probably aren’t rolling street-legal, but they are deep in the throat of your mom.”

All Dogs: Nasrene Kordani gets radical and sentimental with All Dogs.

“Do you remember that one night in mid-summer in the Midwest? The one when you were tipsy off of whiskey and the energy of the sick basement show you just saw? You were electrified by the oncoming storm, uncaring and standing next to the bonfire as the drops of rain evaporated before they hit your salty skin. Remember leaning in for a sweet kiss as the thunder boomed and lightning struck almost too close for comfort? That time you walked your bikes hand-in-hand, getting drenched and watching the town light up like fireworks? Or falling asleep, with the fan droning and whining you to sleep under a thin sheet and a thick blanket of sweat? All Dogs is kind of like all that.”

Scott McCaughey: Mike Faloon sits down Scott McCaughey of Young Fresh Fellows and Minus 5.
“Seattle. Mid-to-late ‘80s. Hair was long, thrift store flannels plentiful, grunge was on the rise. Black Sabbath, blurry black and whites, opiate-fueled brass ring aspirations. The story has been told many times but is further simplified with each rendering, and overlooked are the bands that laced their records with humor, those for whom commercial success was secondary to having fun.

Chief among these bands was the Young Fresh Fellows, led by Scott McCaughey. I was drawn to their first-listen hooks and barely contained pandemonium. I loved singing along with songs that felt like they would sail off the rails at any moment. And while the tunes hit early and often, McCaughey’s wit revealed itself both upfront and over time—with lyrics that keep me returning for more.

Over the years, McCaughey has fronted a number of bands (Young Fresh Fellows, Minus 5, Baseball Project) and played with countless others (R.E.M., Robyn Hitchcock). He’s been a music reviewer, record store clerk, and filler of mail orders. Along the way he’s garnered a reputation as a writer and performer that led to playing Paul Westerberg’s wedding and producing Teengenerate’s first album.

Yet for all that he’s accomplished McCaughey exudes a restless sense that he hasn’t yet found what he’s looking for. Or maybe he keeps finding it and that spurs him to press on.
In either case, he has no plans to ease up. In fact, McCaughey will tell you that he’s never had any plans other than to keep the proverbial shirtsleeves rolled up.

His last venture was the most expansive of his career, a five-LP set of all-new material, the Minus 5’s Scott the Hoople in the Dungeon of Horror, a project he recorded at home with friends. His songs evoke the Beach Boys and Big Star, along with the Clean, Reigning Sound, and Treasure Fleet. He continues to mine that vein of timeless garage pop and rock and punk that many of us can’t get enough of.”

“Daniel Makagon is a breed of punkademic that blurs the line between fieldwork and theory, insider experience and meaningful observation, as well as sheer enthusiasm and critical perspective. Others have joined the fray by examining riot grrrls, straight-edge, and queer punk, but Makagon prefers to dig into punk spaces and rituals—the DIY vein forming an underground network of basement gigs, all-ages venues, and rented halls that have survived—even thrived—as the bar scene has stagnated. Schooled in communication studies, and teeming with an appreciation and keen eye for both performance and cultural studies, his new book Underground: The Subterranean Culture of Punk House Shows is an inclusive account of close-to-the ground democracy in action within the frenetic music communities that dot the ever-changing and tenuous American scenes. Straightforward, honest, and committed to his subjects, he offers a fresh gaze at the sociology, economics, and ideology of keeping things small and electrifying, cheap and youthful, and egalitarian and earnest.”

Donna Ramone knows that anarchists don’t wear braces (and takes the cyber out of bullying).

Cassie J. Sneider is washing dishes in her birthday suit.

Rev. Nørb compares the relative merits of David Bowie and the common potato.

Adrian Chi ain’t a fan of the love song genre.

Art Fuentes realizes his daughter has entered the dating field.

Kiyoshi Nakazawa contemplates hitting an elderly person with a bike.

Rhythm Chicken wants to keep his town a “dry” town.

The McAllister Family Memorial Fund aims to provide long-term support to the loved ones Robert McAllister (Iron Chic/Capital) left behind when he passed away on January 9, 2016. While other crowdsourcing pages have been established to provide immediate relief for Rob’s family in the aftermath of his passing, the McAllister Family Memorial Fund will serve as an ongoing resource to help Marisa, Rob’s partner, and Ramona, Rob’s daughter, in the weeks, months, and years to come.